Mimes and jumpers, evening clowns are often accompanied by animals. Two centuries apart, the horse of the unfortunate squire Billy Button, the horse of Pieric on a picnic, the donkey of Gobert Belling or Karandach, but also the dogs of Boswell, Carl Aix or Fratellini, the geese of Babylas, the cats of Hermany or Kouklachev prove to be irreplaceable partners. Among these precious allies, the best partners are still the pigs, according to clowns. Alongside Billy Hayden, Janslie Jansen or the Miss Countess, farm pigs, but also the Douroff boar or the Boum-Boum sow Porte-Veine, have all walked their funny silhouettes in the rings of the greatest circuses. 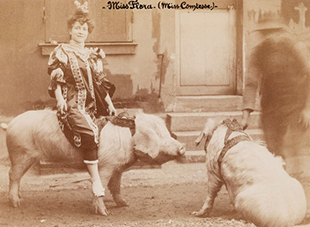 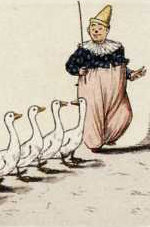 Which partner for which "clown"?

The emerging modern circus is part of the nomenclature of theatres. Antonio Franconi borrows the character of the Clown from the English pantomime and writes it in French, "claune", pronounced "cla-oune". It gradually supplants, in the program, the Paillasse or the Bajazzo, soon declined as generic terms, pagliacco in Italy or payaso in Spain. The English sounding circus clown was finally born and established... in France. British programmes announce the entry of the Joeys in reference to the legendary Christmas pantomime clown, Grimaldi, known as Joey. Elsewhere, familiar regional characters can be found in the ring. In Berlin, the popular Popanz is a hit with a round belly and gluttonous jowls. Thus, the famous Wilhelm Qualitz "opened" the Ernst Renz circus in 1846, without knowing that in Philadelphia a little Tom, son of British circus director Fred Belling, had been born in 1843. The future Aujust, in Berlin dialect, would relegate Popanz to the field of nursery rhymes thirty years later. Dressed in the black outfit of the squires, too big or too narrow, the newcomer first hits the gate, the wall of artists, in their clothes lined up in front of the gardine. When the acrobat with a floury face, an eccentric "jumper" in a kit and bi-coloured leg tights, wraps himself in a soft frock embroidered with flower or animal motifs to hand balloons to the ballerina on horseback, he sketches the figure of the so-called white "clown". Little by little, with the advent of clown comedy, the characters became stronger. The roles are being distributed. The slaps too. 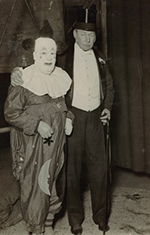 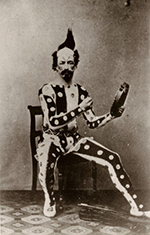 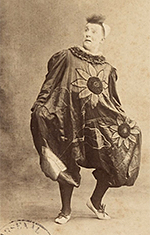 In the circus, the theatrical performance is initially limited by the interdiction to speak but also by the need to interpret short, spirited, virtuoso or comical riding-area scenes. The plot is light, and the twists and turns are spectacular. The more the character of the protagonists is opposed the more unexpected the action can be and the more burlesque the effects. The English poet William Blake, a neighbour of the Astley Amphitheatre in Lambeth1, wrote a poem in 1790 entitled The Clod and the Pebble. The poem pits a malleable, spontaneous, imaginative, empathetic being – selfless – as childhood attributes against the adult who is full of certainties, authoritarian, calculating and egotistical – selfish. This Manichean duality between innocence and experience is the perfect characterisation of the Auguste, naive, enthusiastic, gullible, on the one hand, and, on the other hand, the authoritarian, arrogant, manipulative clown. 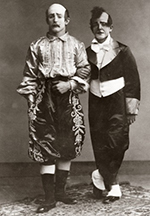 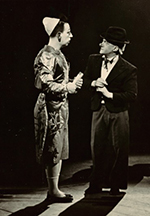 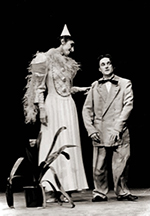 In real life, characters are established according to various factors that determine their relationships. In the theatrical register, the actors fill a type of position that suits their profile to serve the dramatic cause, such as the popular duo of the simpleton loony Jocrisse, the whipping boy and the Janot, his tormentor.

"Foottit brought an atmosphere of devil's nursery to the ring,
where the children found their sneaky mischief
and whose grown-ups endured the magnitude."
Jean Cocteau, Portraits-souvenir, 1935

In the circus, depending on the distribution of roles within a banquiste family, the young artist can adopt the outfit of the white character, like the stooge of his brother or father, a clown, and later become in his turn an Auguste. Thus Umberto Guillaume, the clown Antonet, was his brother Cesare's Auguste at the Cirque d'Été in 1892, before becoming Little Walter's clown. His sparkling bags, filled with swans or marabouts, contrast with the great coat of Walter's Auguste and lead to a power struggle in the duo. Between 1907 and 1913, he masterfully accompanied the metamorphosis of Brock, Brick's accomplice, into Grock, before making a name for himself alongside Aristodemo Frediani, the Auguste Beby. 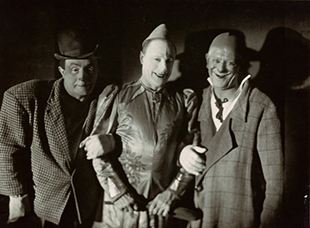 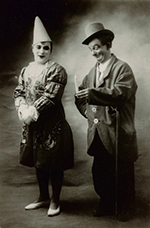 The paradox of the "first" duo

The creation of the first real clown duo is attributed to the English eccentric Geo Foottit, who "acquires" from Tony Grice, the young Cuban Rafael, his black servant/groom, to make him his partner. The event takes place in the elegant Nouveau Cirque in Rue Saint-Honoré, frequented by the Parisian gentry, used to employing in their homes foreign "house Negroes" imported from the colonies. Baptised Chocolate by small spectators of the same Guignol2, Rafael is dressed by the circus director in a fashionable dancer's costume, red frills, black trousers cut below the knee and buckle shoes. Thus, the new comedian, who looks like no other character, slips into the role of an Auguste mistreated by the white character. The Foottit clown also made his own unique costume, with colours illuminated by two large buttons and a flat white collar. 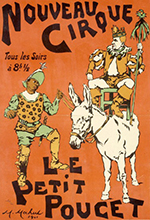 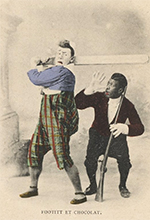 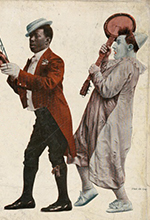 "Slapstick comedy" was born, transplanted from the fairground trestles to the ring. The hierarchy of characters and treatments is found in the distribution of circus pantomimes. The advertising pitch showing Chocolat "beaten but happy!", which is not well received by popular audiences like the one at the Medrano circus, calls for a revision of the terms of the power struggle. The contemporary dramaturgy, from Motusse and Paillasse or Petit Gougou and Eddy Sosman, from the Matapeste, to the Colombaïoni and the Expirés, renews the texture of the exchange and allows the creation of duos composed only of Augustes, respecting the codes but free from their constraints. 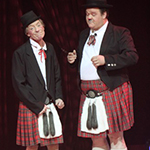 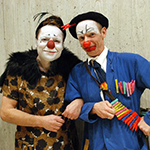 In the interplay of the clown duo there is often a third character who is soon given the name of a dynasty of carousel masters. In charge of regulating the artists' performances in the ring, the "Mr. Loyal" ringmaster is the obligatory interlocutor of the troublemakers embodied by the clowns. His more or less benevolent mediation fosters the development of their comic vein and the effects that form the punchline of the gags. The question of the stooge is therefore left open since the function is officially attributed to the clown who releases the creative explosion and the blunders of the Auguste. In German, the "aujust", still in the cradle, is nicknamed August der Dumme, something like this stupid Auguste, a banquiste's version of the village idiot who attracts tender reactions of annoyance, quickly transformed into beatings or slaps with a bat or slippers. 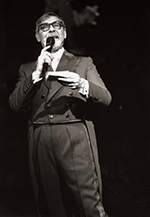 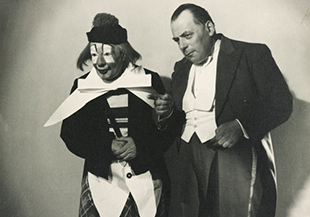 On tour throughout Europe, there are four Fratellini. Luigi and Paolo alternately form a white-Auguste duo or "dandies acrobats", Augustes in black clothes and wearing a toupee. Francesco is a perfect equestrian acrobat with a light humour and Alberto the youngest, an acrobat and soon to be an Auguste. When Louis died in 1909, they rehearsed as a trio, François as a clown, a sparkling goblin, Paul, known as the Notary, with a round shape in a top hat and monocle and the clown, Albert in vagabond clothes, with a grimacing mask. Celebrated by theatre men, painted by the artists of their time, copied, impossible to match, they pave the way for an emergence of trios, some of them as legendary, such as the Andreu-Rivels, the Cairoli, the Bario, the Leonard… 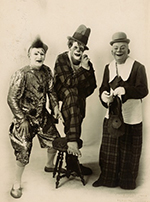 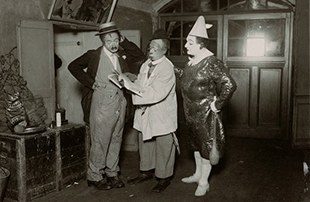 More musicians than actors or acrobats, but excellent performers under wacky appearances, some clowns form trios, then quartets where the white character, nailed to the ring by a bag more and more loaded with sequins, a real moving picture of considerable weight, turns into a maestro. Clowns-orchestra, the Rudi Llata, the Rastelli, the Francesco do not give up on making people laugh. They broaden the field of emotions by alternating registers, from gag to melodies to concertina.

When women play a role as stooge in this male world, they wear the embroidered bag like Evetta, Lulu Craston and Valérie Fratellini or, like Henny Bario and Patty Chicky, they opt for the cocktail dress. Elegant, mischievous, all of them have a caring and pedagogical attitude, which barely slows down the verve of their partners. 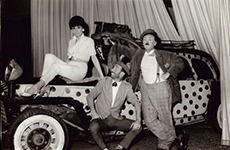 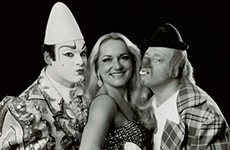