A clown makes people laugh. If the ridiculous or overly offbeat character cannot be taken seriously and his behaviour can only be accepted in a show, the artists who bring him to life by putting all their know-how and expertise at his service are professionals working in an art and craft that require learning, talent and experience. 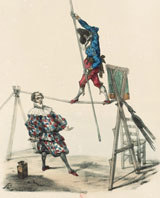 Play and laughter are the origin and purpose of the clown whose art follows and illustrates the theories. But the range of effects that the artist can produce is as wide as the performances that his creature conveys, from smiles to laughter, from pleasure to fear. This is why there are so many cultural variants of clownish expression.
Both artisanal in its techniques and aesthetic in its expressions, clown art is all about skills and creativity. Several types of professional practices exist, ranging from performing, among others in a career, from a clown role in the theatre or in movies, up to the exclusive exercise of the clown profession in the various fields in which it is practiced: circus, music hall, cabaret, public space or even social work. In this case, the essential skills, of actors, the playing skills, the physical or improvisation skills, are complemented by many others, such as musical, acrobatic, to which are added the necessary knowledge in the field of application, as for clowns in hospitals.
All these techniques contribute to the clown's creativity, whose reprises, entrées and shows are developed by improvisations that are progressively structured or written in advance, then adjusted in interaction with the audience. The forms of the clown have evolved over time, from theatrical characters and positions in the Renaissance, to clown comedy figures born in the circus ring and to comic heroes in burlesque cinema.
Clown art has a thousand faces: acrobatic clowns, music clowns, eccentric clowns, music-hall comedians, cinema comedians, television clowns, clowns on the Internet and today it flourishes in many registers and works that constitute a vast repertoire. 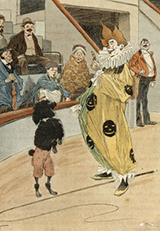 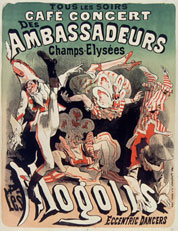 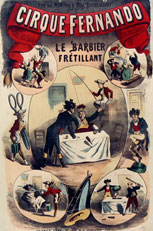 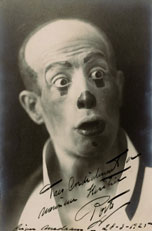