As a mythical character, the clown is an intruder, a marginal who breaks into the normal course of social life. During the interlude caused by his intervention, he opens a potential space to see, live and imagine the world differently. Comedy characters and clown avatars have this function in many cultures. 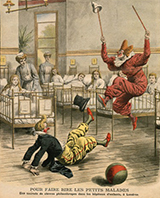 With this in mind, in the 1980s clown actors explored new fields and met new audiences, in line with the modern trend of opening up the performing arts to society. In France, the Bataclown's "clown analysts" inaugurated interventions in the professional environment. The "clown doctors" of Rire médecin follow in the footsteps of the interventions by Chocolat or Fratellini at the hospital, the Patch Adams Institute and the clown doctors of the Big Apple Circus.

The "clowns without borders" are active all over the world. By no longer interacting with spectators but within a social or professional situation, they have introduced the new practices of social intervention clowns. Whether in professional or health care settings, they are necessarily at the heart of a relational system, with its exchanges, power relationships and conflicts. Although they are not intended to mediate, they produce some of the same effects, which have less to do with reconciling contradictory points of view than with mutual understanding and social creativity. Like the female clowns on the streets of Medelin in Colombia, the change produced during the clowns' social intervention therefore comes "as a bonus" and frees, as Ardoino says, forces that until now were nonexistent or only potential. 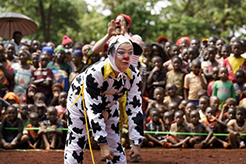 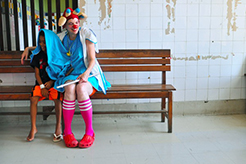