By donning a red nose to a multitude of statues, from Paris to Los Angeles, clowns without borders are proclaiming in November 2012, the Right to Childhood everywhere in the world! Operation Born Nose Free and Equal symbolises a territory where gravity never excludes the pleasure of giving joy. 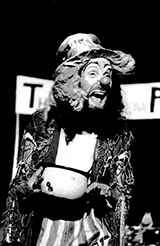 This tension is the source and basis for the evaluation of missions developed from one side of the world to the other in an attempt to overcome fears and give back to those they encounter, during a show, a part of their innocence. Clowns activists in convivio in Colombia1, "prescribers of tenderness" in Quebec, Dream Doctors in Israel, Bangladeshi drama therapists with the survivors of the Rana Plaza or the Kutupalong Refugee Camp for the Rohingyas, defenders of a "politiclowne and a clownethique"2, some clowns question and challenge the citizen and the political sphere. Alone on a stage or organized in brigades on a field of intervention, professionals or volunteers, trained and invested in a mission, clowns interfere in the local or global debate with unstoppable weapons since they produce laughter. Sophisticated and refined, they borrow from the broad, thousand-year-old spectrum of poetry, satire and farce to send messages into the public space. One of the rallying signs of these fighters is often the red nose. Born in the West but increasingly widely distributed, the "smallest mask in the world" undoubtedly justifies a growing globalisation of the term "clown" taken out of the context of the circus ring to send messages in the public space. 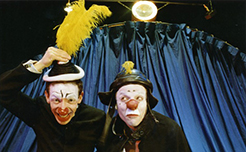 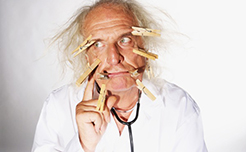 Creating your clown to look at yourself 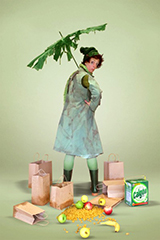 Jacques Lecoq's legacy, transmitted by his National Theatre School, is still alive. Searching for your clown is certainly a step for artistic creation, but in the private sphere, the process can help you with your personal self-help and development, self-healing and recovery. According to Dr. Seznec, at a time of conscious confrontation with a heavy corpus of tensions, emotions and fears, the best therapist is still, perhaps, the clown. Your own clown. And the kindly self-derision offers a way of naming, defining, accepting and finally overcoming negative thoughts in order to turn to some of the more collective issues of our time.

"The clown tackles universal themes to help people recognise themselves and feel reassured when they see someone worse than them."
Michel Dallaire, contemporary Quebec clown and director3

Elise Buffet-Ouvrier practices a very physical clown theatre. She teaches in ACT Therapy internships how to approach problems, which are all universal in the end, through an assumed and unifying awkwardness. A partner of the Théâtre de l'Unité or the Shanghai Theatre Academy, she advocates the art of treating failure and gravity in a joyful way, renewing the technique of a salutary slapstick, a talkative technique that goes from burlesque stunts to floods of catapulted words, recomposed like Sol' s monologues (Marc Favreau). Like him, she challenges a very dangerous society, with a frenzy that triggers disorders familiar to Leo Bassi, Gardi Hutter or Jango Edwards, but in a less furious way. She stages her "blunders" through "accident-prone comedies" such as Debout là-dedans – Bivouac acro-bancal (2017) or Poisse ou la gravité joyeuse (2018). 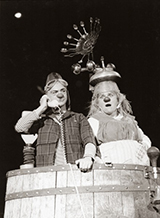 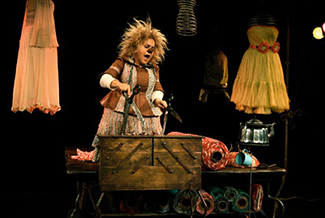 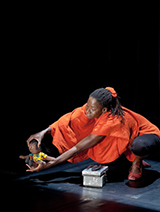 The African tradition of transgression, which provokes laughter, is perpetuated by masked entertainers, with downright saucy gestures, or by some facetious griot. The "clowns" are recent, they do not necessarily wear a red nose and also tell stories with simple but thoughtful words. Their objective is not to put the villagers to sleep or distract them, but to invite them to participate as "spect-actors" in the exchange conducted in the spirit of a Forum Theatre initiated in 1971 by the Brazilian Augusto Boal. The exercise is delicate because it is based on a banal and often unbearable reality in order to organise resistances against the deep-rooted traditions of the past.
In Senegal, the Djarama association entrusts its artists with the task of staging, without complacency but with humour, the inexcusable fatality that allows authoritarian and liberticidal customs. Thus, in Les Aventures de Dada Ier they vilify the abuses of power with a simple language made of traditional gestures and costumes and litanies with familiar rhythms. Within the troupe, Patricia Gomis, who founded Djarama in 2005, is first and foremost a clown. A clown without make-up, without nose. In the play Moi, Monsieur, Moi!, directed by the Brazilian Marcià de Castro, she explores, alone with puppets, the terrible details of the drama of the little African girl, the abuse, the excision, the yoke of arranged marriage. "In Senegal," she admits, "people laughed their heads off because they know what I'm talking about!" (Radio-Canada, online edition of the 8th of February 2017).

The clown with many faces 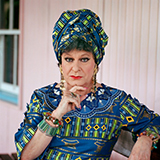 In History, some clowns, fine observers of an unequal and unjust society, leave the stage to enter the public arena. Thus, from one side of the Atlantic to the other, Daniel MacLaren (the American clown Dan Rice) in 1868, or Michel Colucci (the iconoclastic French comedian Coluche) in 1980, are running in the presidential elections in their respective countries. In a South Africa fractured by segregationism, actor and author Peter-Dirk Uys is running for legislative office against Prime Minister Roelof Frederik, known as Pik, Botha turning his campaign into a show he calls Adapt or Dye. He called on his talents as a satirist and parodist to create and perform by himself a small troupe of clownish and crudely familiar characters on the stage of the Space Théâtre du Cap, the first theatre to disregard the dictates of apartheid. Over the course of Beyond the Rubicon, he underwent successive metamorphoses into men and women typical of a strengthened Afrikaner society, rigid in a sense of superiority and security offered by apartheid.

To fulfil his mission with panache and conviction, Peter-Dirk Uys invented in 1981 a majestic and authoritative feminine double that strangely resembles Margaret Thatcher, Evita Bezuidenhaout. He gives the mandate of ambassador of the resistance to this imposing white woman, who watches journalists, senators and other representatives of the authorities without blinking. Omnipresent, relentlessly authentic, Evita is the third female character played by Peter-Dirk Uys, a clown-mirror of a society where he exposes the brutality, the corruption of men of power and the absurdities in a manner that is barely toned down, scarcely diverted by Evita's female qualities. This phenomenon of reincarnation, which in its reality and longevity exceeds the simple spectacular parody, raises questions about the importance of the role invested by the clown in the representation, but above all in the liberation of a contemporary society from all excesses. 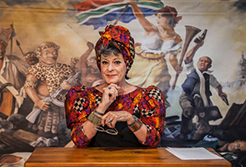 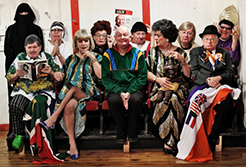