It would be pointless to give him a filiation: the clown is unique. As soon as the circus came into being in 1768, he entered the sawdust circle by decreeing "power to the imagination". Like a familiar cocoon, the ring is his universe, but he perceives the sounds from the outside and grabs them. Permanent in the collective imagination, he is nevertheless constantly changing in line with the rhythm of world events. Filled with influences, and a source of infinite inspiration, he serves as the only link that really connects him to the world of farce, madness and fantasy: the art of making people laugh, always renewed, by essence and by necessity. 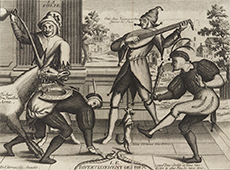 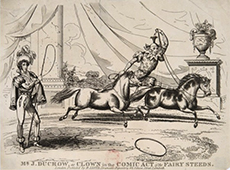 The clown in all his forms

The character with a white face whom tradition, since Joe Grimaldi, has learned to call "clown" a century before the appearance of the Auguste, has won acclaim with great difficulty. He had to weave through the people and circumstances that kept him in his first condition as a rustic "clod" or a clumsy "colon", then as an awkward "claun" with Franconi. Clad in straw cloth or the coat of grooms, the frock, which is worn by the Pierrots swaying backwards on Astley's mules. A keen observer, a good jumper, he took advantage of the agility of mind and body of the clown and the confidence of the parade artists at the fair to forge his own identity. The clown, the grotesque helper, learns the codes of comedy and equips himself with the tools to run the laughter business. 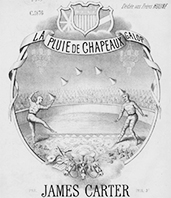 In the 19th century, he invaded the ring with his antics with a string of charivari clowns swept away by the ritornello from the orchestra. His head full of ideas to climb the ladder of glory, he deployed an overkill of facial expressions and introduced in the reprise a brilliantly failed exercise or a mischievous little animal that had been trained. The clown's dream is to stand out from the crowd, to participate in a comic entrée or to hold out to the horsewoman, with pirouettes, the paper "balloon" that she punctures by jumping over the horse. He secretly seeks the crown as the main leading clown, a place as rare as it is coveted, subjected to all the low blows and all the repertoire plundering between clowns.

"Don't doubt it, that' s him, he's the new paillasse, the refined clown of our modern shows, one of the main characters in the troupe. You know it well, grown-ups and children, who only go to the circus to hear the lazzi of the loony simpleton jocrisse character, or to admire his fantastic contortions. I go further, a top-class leading clown, is the most difficult artist to find."
Edmond de Perrodil, Monsieur Clown, 1899

Known as "French Pierrot" in America, the clown is called "the white" or "whiteface", in the tradition of the smooth talker Jean Farine, in the 17th century, then "the glitter" in the wake of Victor Chabre, better known as L'éclair. Born in France, a blessed country where stone or wooden circuses flourish, Monsieur Clown is of mixed ancestry, Anglo-Saxon for the extravagant audacity and insolence of black Pierrots of the perfidious Albion, and Latin in its cosmopolitan dimension. He first works alone or with occasional partners. But it is with the official birth of the comic character who is referred to by a simple first name: Auguste, that the clown can really consider becoming the real master of the game. 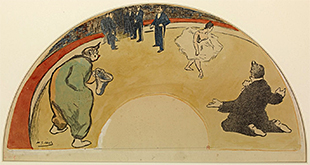 Son of an English pantomime clown, George Foottit (1864-1921) forged himself on the carpets of the paternal tent and in the Sanger Circus arena a technical vocabulary and desires to conquer the world. Hired at the Nouveau Cirque de Paris as an acrobat and equestrian actor, then, having lost his horse to gambling, mime clown and jumping clown, he wears the Victorian clowns' neck ruffle collar frock. But very quickly, a little overweight, a disgust with the mawkish behaviour displayed by the clown in collars and a tenacious desire to assert his own identity inspired him to draw up a new wardrobe. An emblematic figure of the circus clown, celebrated as a model, Foottit, in the end, is unlike any other. A perfect performer of a clown comedy that he helps to create, he virtuously handles the art of exaggeration, parody and derision. He indiscriminately "charges" other circus artists and personnel or personalities from the political and artistic world, and especially women. But his phenomenal success comes from the totally improbable couple he formed with a new and original Auguste: the young Cuban Rafael, who is renamed Chocolat for the colour of his skin. 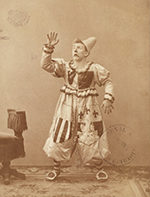 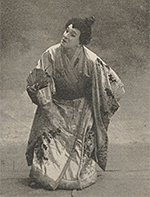 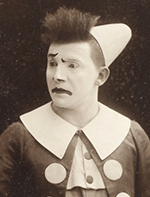 A black line drawn from the tip of a brush that does not hesitate on the figure covered with a layer of "greasy white", the signature punctuates the eyes with a comma, a curl or a circumflex accent. Some cross the eye, others end in a black tear. Every clown has his own, as personal as a fingerprint. The ebony signature is not the only sign that identifies the clown. A stigma from ancient times, the blood red colour is used to mark the bridge of the nose or the nostrils, the lobe of the ear, or the entire ear, further isolating the pure oval of the lunar face. Finally, topping the signature, the white felt cone borrowed from the Pagliaccio of Italian comedy is worn short or long, clean or rolled up at the edges. Antonet covers his own with sequins, with marabout down on the edge or with rhinestones or feathers on the crown. 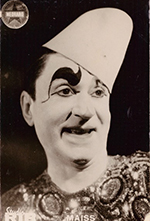 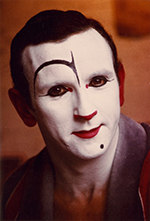 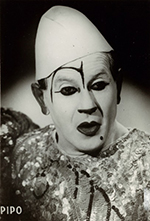 From the frock to the shiny outfit

The clown's costume accompanies his metamorphosis over time. For the position of grotesque, eccentric balancing act on chairs or horses at the end of the 18th century, such as John Ducrow or Little Huline, it is shaped like a tunic split into spikes on a striped tights or a multi-coloured "tumble hat" and a hat with bells. The agility artist who has become a clown keeps his acrobat kit and adorns it with ornaments, like Geronimo Medrano, the clown Boum-Boum. Finally, at the crossroads of the frock decorated with frills or large embroidered motifs and the bullfighter's sparkling clothes, the bag sublimated by the clown Antonet (Umberto Guillaume), shared between the bullfighting arena and the circus ring, stands out.
With the development of speech as the main medium for clown comedy and a strengthened role of authority, the clown loses the need to submit to acrobatics, which remain the prerogative of the Auguste. His bag, which is increasingly tailored, is getting richer and heavier with stones and sequins. Costume designers, including the specialist, Vicaire, and great couturiers such as Poiret or Schiaparelli, can effortlessly create models of incredible inventiveness and richness. 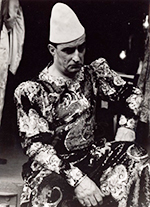 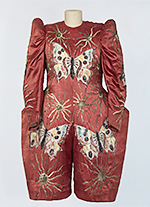 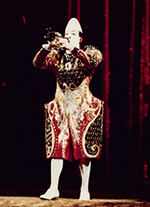 Having become the master of the game, the clown has many facets: precious and majestic like Francesco Caroli, haughty and tyrannical like Foottit and Antonet, debonair and chubby like Jean-Marie Caïroli, Mylos, W.C. Ilès, Pompoff or Kiko Fratellini, agile in body and mind, light and facetious like François Fratellini or Luis Cervantes, charming and soothing as well as Alex (Alexandre Bugny de Brailly) with Zavatta or paternalistic and accomplice like Alexis Grüss junior with his Auguste father, Dédé. They share a natural elegance, authority and arrogance that resemble a diverted role as a mentor, in fact as a provider of punishment. Thus, he challenges the common sense of his Auguste by entrusting him with a somewhat dangerous role or the custody of dangerous accessories or oversized devices. With his undisputed power, he is preparing to regulate and sanction unskilled avatars. 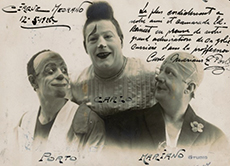 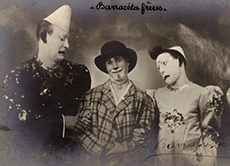 The analogy often used between the character of the clown and the role of the father raises questions: the clown wears a "dress", a variation of the bag, light silk stockings and golden pumps with small heels. For Michel Soulé1, the clown would represent both father and mother, which would blur the parental image for the child in the audience. He would project into the character of the clown his own inability to distinguish paternal authority from maternal authority in the figure of the persecutor, from whom he would suffer a fantasised hostility. The question then arises of the permanence of the impact of a form of clown-Auguste, adult-child relationship, in time and in a context that is now almost immobile and therefore increasingly extravagant. Thus, the contrast between the clown's brilliant aristocratic allure and the Auguste's vast and unfathomable rags, now questions the meaning and future of a comedy that, mythified, has now frozen. 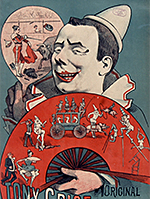 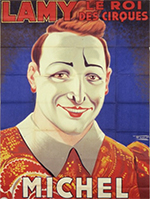 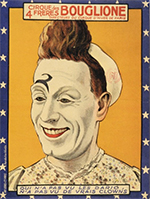