The clown is a multifaceted character that can hardly be reduced to a silhouette, a character or a register. If we can consider it through the prism of the "positions" dear to theatre in the early days of its history, when only the "white" character and the Auguste are known to exist, the situation becomes infinitely more complex in the middle of the 20th century when actors will start exploring a repertoire and codes of performance to appropriate them and transcend them to write a new page in an artistic adventure with endless roots. 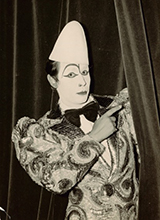 Clowns have always relied on a multitude of media aimed at provoking laughter in order to express themselves. From the gesture to the verb, from silence to explosion, from emptiness to fullness, from the costume to the prop, they find their inspiration in a catalogue of intentions, emotions and effects to define themselves in terms of their play and appearance. For several decades now, they have tended to be divided into different categories and evaluated in terms of traces and profiles rather than masks and cloakrooms. For more than a century, the most notable difference was between the clumsiness of the Auguste and the arrogance of the clown, but nowadays the differences are more subtle to help us better understand the strengths of a polymorphic actor, carried in his incarnations by as many women as men, placed under a single clown identity.
The most dramatic changes began in the 1970s with the appearance of the first women who decided to give birth to their clown, without concessions or limits. The French Annie Fratellini, Maripaule B. – Motusse –, Catherine Germain – Arletti – and Emma la clown, the Swiss Gardi Hutter, the Belgian Carina Bonan, the Quebec woman Francine Côté – Adrenaline –, among many others, mark out new clown territories with their words, their bodies, their presence and their virtuosity. Alone or in pairs, they offer the clown new perspectives while anchoring him in a different reality. Clown or clowness, these artists create a unique profile, reveal another density of the character, but above all diversify the main lines of their character. Like the circus, the clown has long been considered more or less indivisible despite the differences in terms of looks and appearance. However, as we entered the 1970s, it was divided into a multitude of figures and individualities, which were inevitably based on a family tree with visible roots, but which borrow from the fragility of the world and are therefore stronger and more just. 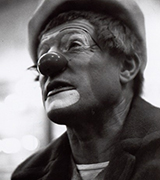 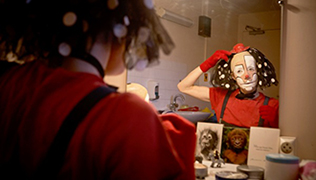 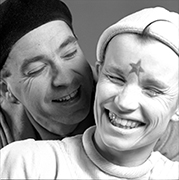 listen so some of Annie Fratellini's recordings 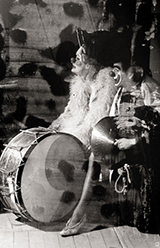 From the late 1960s, actors gradually took hold of the clown, fascinated by the unsuspected psychological meanders of an extraordinary creature, but they also took the opportunity to develop their style, technique and skills in order to better reflect their desire to be clowns in tune with their times. Ariane Mnouchkine's show, Les Clowns, marks the time of clowning as an evocation of a field that embraces all possibilities. Between impetus and suggestion, Les Clowns are a symbol of the first step in a spectacular artistic transformation. But above all, they prove that clowning can escape the constraints of the entrée or the simple reprise and impose itself as a source of inspiration for the creation of more elaborate and especially longer forms.
Like this creation by Théâtre du Soleil, which is a precursor artistic gesture, several companies will gradually implement the clowning register to develop complete shows. Trained at the Centre national des arts du cirque in Châlons-en-Champagne, accompanied by their teacher and mentor André Riot-Sarcey, Roseline Guinet, Alain Reynaud, Nicolas Bernard and Roger Bories founded Les Nouveaux Nez in 1991. This quartet of clowns where strong identities merge with simplicity to create fabulous comic mechanics has been performing in hundreds of venues from one side of the world to the other for nearly fifteen years. Each of their creations is crafted according to their individual breathing patterns and is balanced with millimetre precision: in this respect, these shows are similar to Grock's, who conceived it in his time as a remarkable clockwork movement, with a comic effect and a burst of laughter every thirty seconds 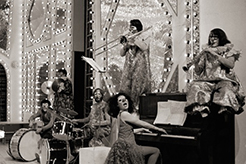 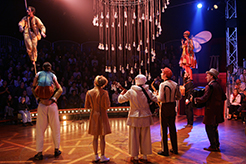 Nikolaus, who also graduated from the Cnac, founded the company Pré-O-Coupé with Ivika Meister in 1998, with whom he performs as a soloist or with partners. Tout est bien-catastrophe et bouleversement, created in 2012, belongs to the second category: directed by Christian Lucas in a scenography by Raymond Sarti, the show is based on a mixture of absurd and burlesque. With Marée Basse, the members of the Sacékripa company repeated the feat and articulated gestures and facial expressions with metronomic regularity, provoking uninterrupted laughter. The Semianyki, a Russian troupe based in St. Petersburg, create their shows from a collective of artists and develop a particular comic style, willingly aggressive and very interactive with the audience. This notion of contact or bond with one or more spectators is largely inspired by a new profile, shaped in the early 1980s, the predatory clown. Played by the American David Shiner in Le Puits aux Images, he literally grabs members of the audience and gives them a rough time, much to the delight of the other spectators. He "hunts down" his victims, evaluating in a few seconds their supposed weaknesses and especially their naive predisposition to cooperate, sometimes until they reach a ridiculous situation that they obviously do not control. Very quickly, this "predator" who sacrifices his improvised partners to get a laugh will inspire other people to follow suit, sometimes creatively, to become the basis for the development of what is nowadays called a profile. 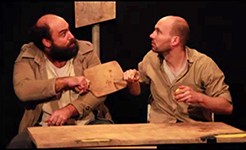 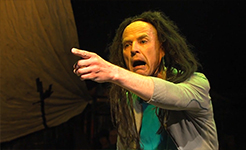 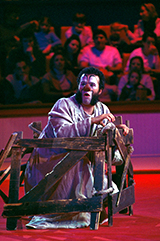 One of the most obvious aspects of the evolution of clown profiles is undoubtedly the dilution of the characters developed in the 19th century, resulting in a dichotomy between terminology and appearance. Most of those who claim to be clowns today are in reality, in terms of clothing and character, Augustes. The word clown has become generic, a term that embraces a wide range of intentions, a kind of unforeseen Pandora's box from which personalities and silhouettes spring out. This creative melting pot obviously gives rise to new profiles whose richness and diversity suggest how much the clown, an entity that is both precise and unrestrained, is full of resources to continually evolve. The mutation of the clown profiles over the past century has been characterised simultaneously by the constitution of a carefully established register and by the inevitable tensions and contradictions involved. Shifting is also a fundamental concept. For a long time, clowns used simplified boxes that they were likely to fill in. Acrobat, trainer or musician, each category then offers the person who chooses it a range of codes and rules that can be adopted by everyone's imagination by tweaking it slightly according to a particular taste or ability. If contemporary artists such as Pieric and Noémie Bouissou are part of the tenuous lineage of the animal trainers clowns, their complicit work with ponies or birds inevitably stands out from the work of Durov or Babylas. 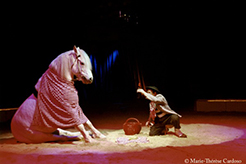 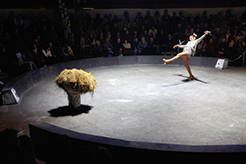 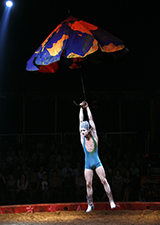 The most significant contemporary shift is the ability of acrobats and jugglers to combine their virtuosity with humour. There were of course many comical acrobats and jugglers in the 19th and 20th centuries, but without this subtle process of theatrical detachment that allows the clownish game to be integrated into an acrobatic sequence with evidence and simplicity. This creates the ideal profile of an acrobat-clown, a reversal effect that sets a register shift and a singular opening towards new playing perspectives. Angelina, the Pillères Sisters, the company La main s'affaire, the Goldini Family, Victor and Kati or the Alfonse circus troupe revisit the notion of performance with or without apparatus, in the form of a complete act or show. The clownish dimension is assumed, humour is transfused into the acrobatic gesture and the clown constantly emerges, even if the traditional attributes are blurred. This flexibility of interpretation shifts the viewer's perception, but also strengthens considerably the notion of profile

Sometimes, beyond the evolution of the clown and the constitution of his new profiles nurtured and inspired by his predecessors, these codes of performance are evolving in an unforeseen context. A company like Cirque du Soleil has a very special relationship with the clown. From David Shiner, the central character of Nouvelle Expérience to Emily Callagher – Mooky Cornish –, the offbeat muse of Varekai, Onofrio Colucci, who joined from O, Zaia and Zed to John Gilkey, creator of roles he played for several months before letting them continue their existence through other people, the Quebec company associates one or several "clowns" to each of its shows. This artistic identity helps give all its creations an unprecedented specificity. Unlike many artists hired by Cirque du Soleil, the clowns retain their appearance and personality. Transplanted into a universe often different from the one they are familiar with, they invest it for the most part with a mixture of curiosity and impatience anxious to measure themselves against a unique environment.
If the powdery white and the red nose have long been sufficient to identify, emblematise, characterise and symbolise the clown and the Auguste, thus defining profiles that are both simplified and structured, reassuring to a certain extent, it must be noted that the understanding of the character has become much more complex. Artists like the Swiss Marie-Thérèse Porchet or Emil make people laugh, even in a circus ring, but they keep their usual appearance and know how to adapt their acting technique to the imperatives of the circle and do not hesitate to integrate scenic elements and typically clownish effects to tailor their entrées to the expectations of the circus as closely as possible. 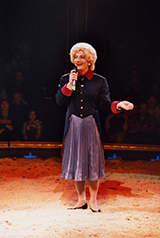 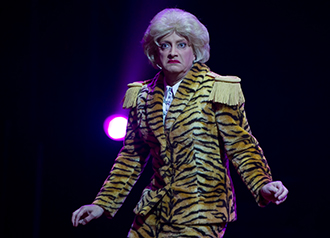 Nevertheless, some do not completely renounce what can help them build a silhouette and are committed to revisiting models forged at the beginning of the 20th century. Bonaventure Gacon, Cédric Paga, Yann Frisch or Dominique Chevallier reinvent the figure of the tramp, a very distinctive silhouette, developed in the 1920s and thrown into the ring after the 1929 crisis. The “vagabond” dressed in rags, with his lower face heavily covered in black make-up, and with eye shadow, haunts the aisles of the great American circus tents and provokes the smiles of the spectators around them. This profile, more dark than joyful, is a powerful source of inspiration for contemporary artists. It would be tempting to mention reunions, sometimes with a certain tenderness, but above all it is a voluntary and uncompromising mutation of a silhouette that has become a profile in its own right, between the Auguste and the tramp. The characters of Ludor Citrik, Okidok or Zig have little to do with those of Emmett Kelly, Linon, Joe Jackson or Emilio Zavatta. Of course, it is always tempting to try to spot sudden connections through a glance or an attitude, but the synthesis between fragility and derision is nevertheless the same. It is both a mutation and a profile, a very contemporary adaptation of a strong symbol of a historical period in circus arts.
This adaptation principle is undoubtedly what best characterises the figure of the clown today, regardless of trends, cultures and practices. Between hierarchy and profiles, he has managed to reconcile his memory and his present to define himself without standing still or getting stuck. Perhaps being a clown is also like that: referring without imitating, to give flesh and soul to a character with such precise contours that they end up merging with those who turned them into the vital foundation of their daily lives. 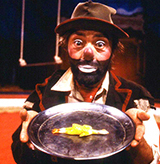 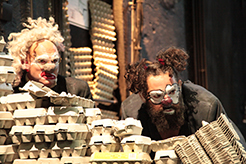 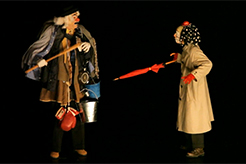