Alone. Organically, methodically and meditatively alone. Today, playing unambiguously with the ghosts of his ancestors, the clown has curiously taken the plunge to wander the ring or the stage on his own. He measures himself with anger, derision, resentment, despair sometimes, but his interventions are always supported by a sharp and scathing sense of humour. In fact, the new clown impulses may now be found in this idea of friction.

Not really concerned about his appearance, fierce, with life as with himself, the contemporary clown, a notion that stretches from Archaos' sheet metal clowns to the most modern ludicrous ones, transgresses the norm, embraces the most common codes to better break them and composes as intuitively as he does with conviction a character with changing inclinations. There is probably no "one" clown, unique and indivisible, but a multitude of silhouettes and characters nourished by the realities of life and the state of the world. This social abyss of the clown is a very reliable axis of understanding to define the main characteristics of an actor with an ever more blurred mask. The abandonment of the nose, common to Joe de Paul, Peter Pitofski, Mooky Cornish, Angelina or Mick Holsbeke, makes the clowns who still wear it all the more significant, as is the case from the Nouveaux Nez to Bonaventure Gacon, from Arletti to Yann Frisch, from Adèll Nodé-Langlois to Proserpine and Ludor Citrik. This attribute is a red point of demarcation within an outrageously preposterous diaspora whose members no longer systematically identify themselves by a colourful exaltation of their nasal appendage. 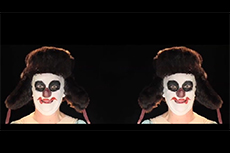 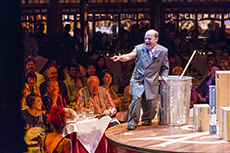 From one clown to another

It's probably a matter of pace, appearance and attitude, but today's clown has little to do with his illustrious predecessors. Aware of the flaws that have haunted men since they were able to laugh at themselves, the contemporary clown is a master of the evisceration of feelings. He manipulates the most entrenched certainties at will and swings his audience's perception towards new and challenging depths of meaning.
The body is often at the heart of the fable: if clowns have long practiced concealment, protected by wide frocks, long coats and heavy sequined bags, today they gladly wear a sparkling nakedness when the play or situation calls for it. The exhibited body rubs shoulders with references to sex and death, thus contributing to bringing the clown ever closer to what he claims to offer the spectator: a living being, immersed in everything that is part of him, bursting with a streamlined energy and sometimes equipped with a sharp verb.
Where silence, gestural sobriety and smiles have often served as the identity of unforgettable artists, the harshest words, the sharpest cries, the loudest rumblings and the most absurd grimaces now stigmatise clownish creatures who no longer bother with the slightest obstacle and prefer to force the barriers of common sense and accuracy with greed and compunction but also with a healthy vitality. The clown is anchored in the world around him and he plays his part, mixing the shadows of common existence with his own light. 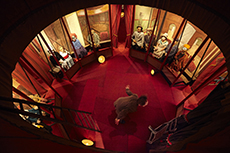 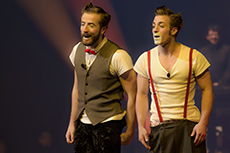 What now stands out clearly against the character's presumed gentleness is a form of underlying danger, a perceptible tension in knotted muscles, a hint of saliva sparkling at the corner of the lips and a glance to pierce the walls and hearts of the less experienced. The contemporary clown has made the public both his most extreme playing territory and his rarely fully consenting victim. Without any embarrassment, he misbehaves with men and women, as he challenges, embraces, climbs on them or pushes them, partners in spite of themselves of a profile torn between the ogre and the candid, a thread stretched between the adult and the child, including the layers in between. When Yann Frisch admonishes or ridicules a spectator, when Ludor Citrik, a sweaty colossus, demands an embarrassing hug or when David Shiner, the precursor in predation, mercilessly and relentlessly torments a child or a young woman who has literally been grabbed from the audience, it is obvious that fear has changed sides. By crossing the 4th wall in this way, without any hesitation and with an assumed wickedness, the clown, like Peter Shub, Dagulda or Jordi Kerol, breaks the supreme taboo, aware that pushing the public into its ultimate limits is an effective way to reverse the situation and abolish the borders between the protagonist and those who are watching. 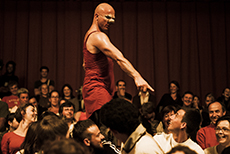 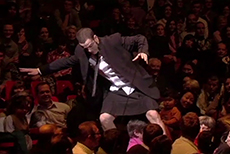 The loneliness assumed by most is counterbalanced by a handful of duets such as Alfredo and Adrenaline, the Expirés or the Zimprobables who value couple relationships more, even if they regularly play the antagonism card to provoke laughter. Strong figures, these clowns bring contagious energy and a formidable patter and ability to communicate, but above all they challenge the classical duality by erasing the contours of two culturally antagonistic personalities. Moreover, the generic term clown may not be the most appropriate in this case. It is still widely favoured by all those who give flesh and soul to figures with a patiently shaped character, but it is also very clear that from a strict appearance point of view, the vast majority of contemporary clowns flirt more with the effects of the Auguste. It is a joyful way of shaking up the lines while claiming, beyond the centuries, a double lineage to define what resembles a powerful clownish syncretism.

It is here, in this spontaneous questioning of the gaze, in this assumed refusal of conventions, in this conquest of classical codes that have become an intangible framework and a source of inspiration following the example of William Tell's parody, a classic entrée revisited by the Colombaioni in the 1970s and that Bert and Fred have now made their own to offer a lively and delightful version which blends more into an irresistible sado-masochism, that lies the essence of the contemporary clown. An attention to the vibrations of the world and men that becomes the matrix of a different humour, often with bitter-sweet tones, but just as jubilant. 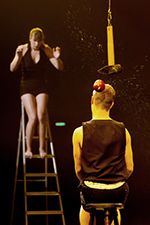 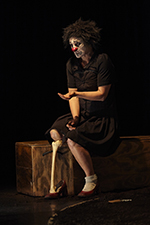 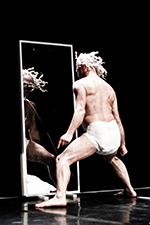