The spirit and the line

In the circus, balancing is a quality. The discipline, which sometimes borrows from contortionism, is a blend of strength and elegance, defined by the absence or presence of an apparatus. Numerous acrobats favour working with one, two, three or more canes. Olga Pikhienko, Elena Borodina and Jacqueline Alvarez, for example, are acrobats who are incredibly comfortable on two "classic" canes, in the style of Alexandre Veligocha and Oleg Izossimov. Others, such as Pavel Stankevitch and Danilo Marder, increase the height of the canes, and in the case of the National Chinese Company, go as far as to create a double, swaying apparatus by piling up canes, at the top of which the artists perform their figures. The German Eike von Stuckenbrok chose to create a subtle distortion effect by using a mannequin as a "partner," creating a fleeting illusion before the immobile silhouette is transformed into an articulated support for a classic sequence. Florian Zumkher uses a chair to develop his balance figures. In the 16th century, a certain Muller developed exercises on a panneau of a horse, a skill that was later reproduced on two canes by the Alexis Grüss's Cirque à l’Ancienne in the 2000s.

Some prefer working in direct contact with the ground, like Andrey Moraru, while others prefer a pedestal aimed at elevating them, enabling better perception of their acts. In the mid-1990s, Ukrainian Anatoliy Zalievskiy overturned the codes of the discipline by creating an original act based on the extreme fluidity of his movements accentuated by the perfectly smooth material that covered a circular support several metres in diameter. His skill and exceptional technical mastery won him recognition from his peers and a prestigious career. A few years later, Sergei Timofeiev used a small platform to construct an extraordinarily light sequence.

The use of a pedestal is driven by the static dimension of the technique. It is all about focussing on a body in action, "prisoner" of a small surface. This impression is reinforced by balancing artists who have chosen to limit themselves to one cane, sometimes enlarged to the proportions of a small mast, like Ukrainian Dima Shine, trained at the Kiev College of Circus and Variety Arts, or the Chinese Li Tong, a member of the Guangdong province military company. By using metal discs simply set on the ground in a sequence of balances that gave his work an original element of  fluidity and mobility, Artur Bezkorinniy offered a new element of density to a discipline that continually reinvents itself. 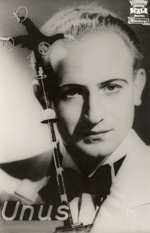 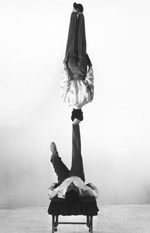 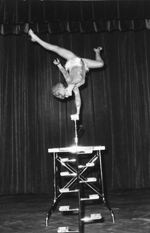 Trained at the Centre National des Arts du Cirque in Châlons-en-Champagne, Jean-Baptiste André personifies another approach to balancing, a source of inspiration for creations based on a perfectly mastered technique. Intérieur nuit, Comme en plein jour, Qu’après en être revenu, Pleurage et scintillement constitute a remarkable evolution of this ancient technique.The last of the abovementioned pieces was created with Julia Christ, a balance artist trained at the Brussels Ecole Supérieure des Arts du Cirque, and an artist of rare intensity. 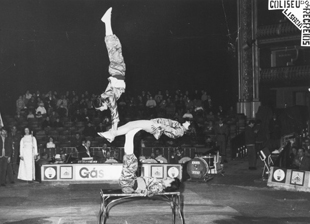 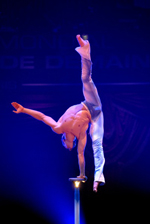 Balancing is one of the essential components of acrobatics. It stems from a general approach to balancing the body and is characterised by a resting position that blends an absence of effort or movement with a certain calm, or relative plenitude found by being entirely dedicated to this activity. To these general elements are added specific properties that can be summed up as follows: maintaining unusual body positions in situations judged as unstable, i.e., unbalancing.
Fundamentally, acrobatic balancing is based on the illusion of stability, when the latter appears impossible to imagine, or is in need of visible re-balancing. Acrobatic balancing is the centre of an intense activity that needs to be organised in order to mask its difficulty, and to give the impression of ease and mobility.

A question of balance

Two essential characteristics can be identified in acrobatic balancing: firstly, making the potential lack of balance evident. Acrobatic balancing is obvious in situations that are explicitly unbalanced. These situations are obtained by reducing the size of the "base supporting the body," i.e., the surface designated by the area of support in which the acrobat's centre of gravity needs to be in order to retain balance. Balancing is therefore more spectacular when it is about remaining stable on the tip of one foot rather than four. Another situation sees the height of the balancing act raised by creating a potential energy of gravity, thereby reducing the possible margin of movement by retaining balance. The acrobatic balance is further accentuated when there is a need to balance on the top of a pyramid instead of on the ground. By adding an unusual position such as an inversion of the body, the balancing act looks even more spectacular. For example, balancing upside down on one arm on the top of a bar held by a carrier. There is also, in this ostentatious dimension of balancing, ways of acting characterised by a certain fluidity, ease and exaggerated postures that help give aesthetic meaning to these balancing acts. Styles are determines by the cultural genres of each acrobatic practice (relative gymnastic alignment and exaggerated postures for comic effect). 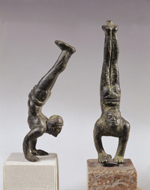 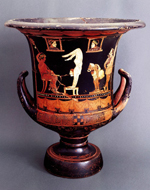 Building a stable world. As we have seen, apparent stability does not mean, "doing nothing," and the action consists of finding solutions to hide the permanent adjustment movements, which means reducing their size. Among these actions, we can cite those that exert pressure on a supporting surface, those that adopt a certain form of alignment of all or part of the body to find an efficient relationship with the support, or those that make the body rigid, or that search for specific reference points in the space or on their own bodies to permanently adjust their position. The action consists of mobilising the kinaesthetic senses and vision to construct the conditions for an efficient balancing act. This is done by organising reference points on the body and in the world, in order to support this apparent immobility.

Acrobatic balancing acts are constructed with the help of difficult to learn physical techniques. Among these techniques we can cite building a pyramid. This is a series of preparative actions that lead to balance and reduce localised disturbances to aid final stabilization which sees one body initially positioned and the coordination of two or more acrobats. Other techniques look at deconstructing a balancing act for a balance is only a success if it avoids collapsing and lands skilfully. This is known as dismantling the pyramid or a transition between figures.

This leads us to say that balancing also reflects a way of organising action that is characteristic of every acrobatic activity: balancing or being balanced means organising yourself in such a way that every action generating movement (i.e. unbalance, through a rotation for example), is merely relative, as it is controlled by mastering the range of the unbalance and by the ability to restore balance from the most difficult situations. Balancing means knowing how to have fun with unbalance! 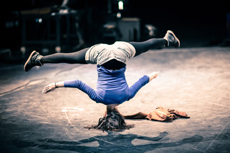 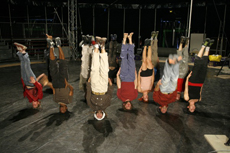 Finally, in balancing, there is a collective dimension often occurring in acrobatics. Such is the case with human pyramids, which become a coordination activity involving, beyond mechanical aspects, trust and a form of empathy contained in the distribution of possibilities for regulating balance between people. Although it is commonly said that the base finds the balance solution while the acrobats at the top remain still, trust is reciprocal and balancing is truly a question of mutual interaction.

Moreover, balancing is often considered as on the human skills measurable by tests such as the Flamingo balance1, evaluating the body's talent for physical and sporting feats. But in a fundamental way, it is about constructions that are learned and developed through specific and rigorous training. 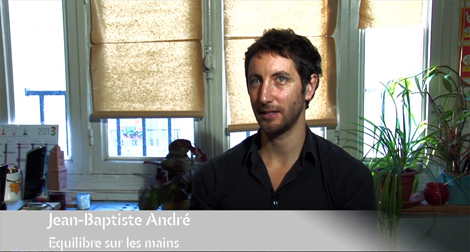 1. The Flamingo balance: a test much used for gymnasts within the framework of a strict protocol: they are timed on a support, such as a beam, with a measured surface.