Man has always attempted to defy the laws of gravity, to raise himself up off the ground, and to fly. Icarus is of course, the first myth that was a basis for composition, but it was the La Course aux Trapèzes show, created by Jules Léotard from Toulouse, which altered our perception of acrobatics, which had until then been firmly anchored to the ground. The various jumps were a good prelude to taking off, but it was the flying trapeze, the natural heir to Léotard's exercises, that would enable circus artists to open a new chapter in the history of the circus by creating aerial feats. 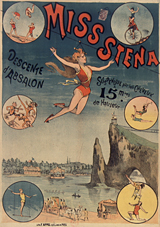 The fixed trapeze, the Washington trapeze, the flying trapeze and the dance trapeze are all branches of the ancient Greek trapezion, which means "small table." Cherished by gymnasts in ancient times, it has provided a repertoire of both shared and specific figures, using a form that evolves little from one technique to another. Although the trapeze, in any shape or form, remains the aerial technique par excellence, other hung, fixed or swinging structures and apparatus, also nevertheless lie behind the composition of an infinite number of acrobatic sequences offered above the ground, sometimes at a very great height.

Rings, bamboo, aerial chairs and cradles, silks, straps, aerial hammocks, cloud swings and ceiling walks are all used. As are fixed bars, used as apparatus in the style of the Peresvoniy in Le Carillon in 1990. Such bars were also used by the first company that Vilem Golovko trained for the 1998 Cirque du Soleil show, Ô, in which artists flew in the structure of a ship hung above an enormous artificial pool. Aerial acrobatics has seen its status as a powerful vector for curiosity confirmed by artists such as Léona Dare and Andrée Jan, who presented their trapeze acts hanging respectively from a hot air balloon and a helicopter. In addition, the artist Miss Stena has hung by her hair from a hot air balloon inside the biggest circuses and theatres in Europe. 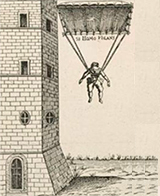 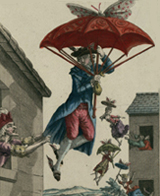 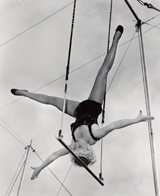 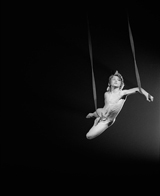