Rope dancing takes its references from ancient times when neurobatus and oreibates performed at local festivals and religious celebrations. Racing and climbing on the high wire were the extreme elements of a repertoire that was continually being enriched. With the arrival of the fil d'archal, or brass-wire, the practice became more complex and a new vocabulary rapidly developed, based mainly on technical innovations that helped create numerous new figures and spectacular compositions. 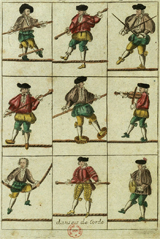 The composition possibilities associated with this very unusual discipline are reflected in a diverse range of apparatus: tight wire, slack wire, high wire, elastic or dynamic rope, multiple wire structures, crossed wires or layered wires, and the curved barre suspended between two supports similar to those used by the classic tightrope walker. Dance references are explicit and work en pointe has been a recurrent theme since the 18th century. More of an individual discipline when practiced on a wire less than 2 metres off the ground, it can also function as a group act when carried out at great height. High wire companies, mainly in central Europe between the end of the 19th century and the early 1930s, as well as in Eastern Block countries from the 1950s onward, were more numerous than the very rare tightrope companies. The wire has a symbolic dimension, fed mainly by the Nietzschean school of thought, which identifies the Übermensch as a tightrope walker above an abyss. This idea helps establish a network of different emotions for the audience depending on the type of technique developed. In turn purely demonstrative and conceived as a simple, virtuoso sequence of jumps, wire work also lends itself to compositions of a mono-disciplinary form, be they early 19th century pantomimes made popular by acrobats such as Malaga and Madame Saqui, or contemporary creations such as shows by the Les Colporteurs company. 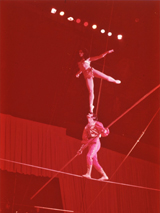 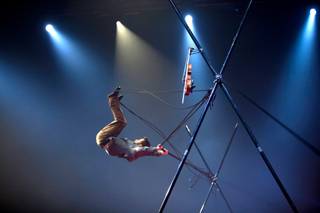 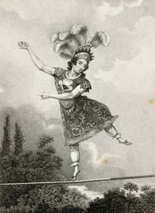