The horse is probably the greatest conquest of the circus. The close relationship between man and horse, domesticated 9000 years ago in the Middle East and a companion both in work and combat, encouraged the emergence of unique links between the rider and his steed. Associated with the art of war since Ancient times, the horse appears on all battlefields, where its training gave rise to numerous skilful variants of which trick riding, which soon became a circus technique, is the most spectacular.

Pyramids, pas-de-deux, acrobatic lifts and artistic poses as well as switch jumping and the Saint-Petersburg Post, were striking elements in the equestrian acrobatics repertoire from the second half of the 18th century onward. These disciplines, which developed progressively, possessed specific codes and formed the basis of the first circus show. They were complemented by line acrobatics, Cossack acrobatics and à la Richard acrobatics. Technical variants derived from the ancient practice of pommel horse, a gymnastic apparatus and saddle support, to develop a vocabulary that was both dynamic and warrior-like. Jumping to the ground and remounting the horse was a classical figure, as was picking up small objects without unbalancing one's galloping mount by bending down at the very last second, along with standing up on horseback wielding weapons, and sliding under the horse's stomach or neck. These techniques were also practiced by the Comanches, the Sioux, the Mongols and the Ossetians. The "serious" element of these feats was humorously offset by comic trick riding, of which the best example is the Rognolet and Passe-Carreau scene inspired by a trivial event of the day, and which encouraged riders to demonstrate both originality and skill. 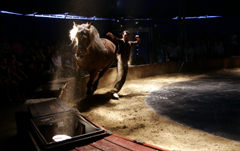 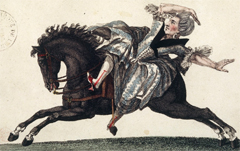