The circus has always shown an extraordinary aptitude for integrating the most notable inventions and innovations throughout its entire history. Designed and developed in the second half of the 19th century, mainly by the Frenchmen Pierre and Ernest Michaux, the bicycle, from the first velocipede to the balance bike, and from the penny-farthing to the popular "bike," very quickly joined the acrobatic repertoire, and technical developments encouraged artists to develop and increase the complexity of the language linked to this new "apparatus". 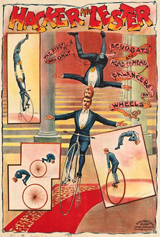 From 1880 onwards, the technical evolution of this method of transport, destined to a brilliant future, provided more and more possibilities in terms of flexibility and speed. As the acrobats mastered it, the way was opened for an ever-richer repertoire.

Although the first cycle acts gave pride of place to the new machines coming out of the factories that were springing up to answer the ever-growing demand, gradually, nostalgia and the quest for difference saw acrobats using older models such as the penny-farthing and the balance bike. In addition, they created technical jokes such as minuscule bicycles a few centimetres tall.

The idea of the cycle inspired a new level of creation, and tricycles, unicycles, monowheels and BMX bikes were all used for enriching numbers and as material for sequences. Beyond demonstrating agility, the apparatus has shown itself as a source of meaning and suggests new identification codes.

The german wheel and the Cyr wheel are the two most emblematic innovations in recent decades. They each look different, have different origins, and are used in a very different fashion. The german wheel, designed by Otto Felck at the dawn of the 1920s, and the Cyr wheel, created by the Quebecois Daniel Cyr in the early 1990s, are mobile apparatus with differing specificities and constraints, but they are above all, structures that call for acrobatic figures, and are probable sources of inspiration for the development of moving objects such as the Zigrolling, the philébule, the trièdre and the topka. 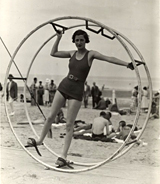 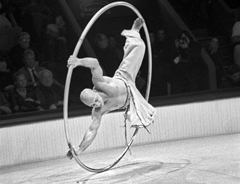 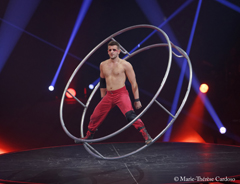