Circularity is a founding principle of the circus, "the land of circles in action," as the painter Fernand léger so nicely put it1, but paradoxically, the use of circular apparatus in the ring is very recent. The German wheel and the Cyr wheel are the two most representative innovations in recent decades. They have different origins, look very different from each other and are not used in the same way.

The early form of the German wheel was created between 1920 and 1922 by Otto Feick, the son of a blacksmith, in Ludwigshafen am Rhein, when he was running a sports club. The idea came to him from a childhood memory of having used pieces of wood to link two cartwheels, made by his father, and then rolling his original "contraption" down a hill. On November 8th 1925 he registered a patent for his "wheel" under the name of Rhönrad, a nod to Rhön, the mountainous region of central Germany where he had invented this new apparatus. It was the means for developing a new discipline, presented at the 1936 Berlin Olympic Games, with 120 wheels in action for the opening ceremony. The German wheel also evokes Leonardo da Vinci's Vitruvian Man, a study of the proportions of the human body, drawn in 1492 and considered a symbol of humanism, a European cultural movement during the Renaissance that placed man at the centre of the universe.

The symbol is a powerful one and there was great enthusiasm for the German wheel, mainly in the gymnastic domain where it drives technical development and international meetings and competitions. The first European championships took place in 1990, five years before the International Rhoenradturnen Verband was founded, a body that laid the foundations of global regulations, and instituted technical norms to develop an activity that remained, above all, a sport. In the early 1990s, the apparatus became a regular in the circus ring and was taught in circus schools. The German gymnast Wolfgang Bientzle, a teacher and artist performing mainly for the Mystère show in Las Vegas, trained several acrobats, in particular for the Cirque du Soleil. 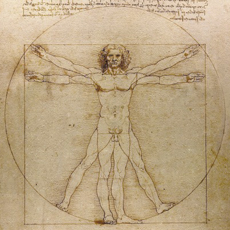 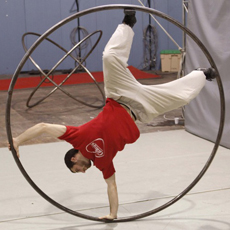 Trained at the Centre National des Arts du Cirque in Châlons-en-Champagne, Hyacinthe Reisch was something of a pioneer in adapting the discipline for the circus ring when he presented his research in 1989. The co-founder of Cirque O and the Que Cir Que company, he helped make the German wheel popular, naming it "the Wheel" in a new context, and also giving it a rich new artistic dimension. In 2003, Tom Neal and Thomas Reudet, also CNAC graduates, developed very different styles but marked the era of the apparatus in the circus arts domain. Tom Neal in particular, treated his wheel like a powerful creature to be tamed, before he was carried away. The idea is always to go beyond an overly gymnastic dimension and to give meaning to working with the apparatus when used for a performance. In 2007, for Le Livre des Souhaits, a creative workshop run by Sharon Moore at the Ecole Nationale de Cirque in Montreal, a German Wheel was incorporated as both apparatus and an element of stage design, as a metaphor for a behemoth, a formidable looking creature that arose from original chaos.

In a contradiction of the range deemed necessary to develop figures, Julien Silliau, trained at the Ecole Nationale des Arts du Cirque in Rosny-sous-Bois and the Ecole Nationale de Cirque in Montréal, chose a smaller, raised stage to perform his unusual number in which he manipulated his apparatus more in the manner of the Cyr wheel ! 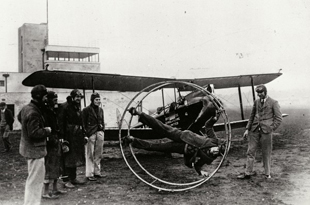 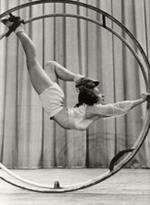 A hoop almost two metres in diameter painted on a Greek urn and manipulated by an ephebe a hundred years B.C., as well as a hoop from a wine-cask or a cartwheel, might all have been the predecessors of the Cyr wheel. However, it really only earned its name as a circus apparatus when Daniel Cyr, a native of the Macedonian Islands, crafted an aluminium circle of a diameter appropriate for his height and developed an early technical vocabulary for it. Daniel Cyr created this apparatus and its figures in the early 1990s, and performed the fruits of his labours in Paris, in 2003, in the ring at the Festival Mondial du Cirque de Demain, where the Cyr wheel rapidly gained fame and visibility. The Cyr wheel has become a popular discipline and is taught in both preparatory and higher education schools. Together, the USA Wheel Gymnastics Federation and the International Rhoenradturnen Verband, established the rules for Cyr wheel competitions by working with teachers and graduates from the Ecole Nationale de Cirque in Montréal. The first competition was held in Chicago in October 2011, and the first Cyr wheel world championships was held as part of the tenth gymnastic wheels world championships, still in Chicago, in July 2013. Made from 3 to 5 sections of aluminium with steel or aluminium joints, the Cyr wheel is a dynamic apparatus propelled by the acrobat's strength. Smaller wheels turn more quickly and enable the acrobat to really let go, whereas the bigger wheels move more fluidly, and are better adapted to hanging figures. The technique is constantly evolving, and is constantly questioned by those who practice it. Angelica Bongiovoni, Alexandre Lane and Alexander van Turnhout, trained respectively at the Ecole Nationale de Cirque in Montreal and at the Ecole Supérieure des Arts du Cirque in Brussels, developed very different, light and powerful styles, while Jean-Baptiste André and Robin Leo, also graduates of the Ecole Supérieure des Arts du Cirque in Brussels, along with Francis and Lea Toran Jenner, the Unity duo, combine their respective strengths to invent new figures of increasingly complex equilibrium owing to the presence of two bodies working together in the same circle. 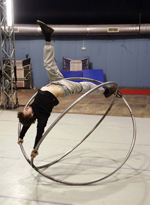 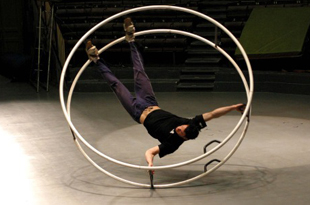 Vasil Tasevski, who trained at the Centre National des Arts du Cirque in Châlons-en-Champagne, created his Topka from two metal hoops, rather like two interlinked Cyr wheels. This beautiful object creates extremely fluid movements and illustrates a passionate thought process on balance. This variation on the circle and movement is somewhat like the spire, created by Benoît Fauchier, from the 2007 Cnac class. His metal structure used for balancing and rotation figures was presented in 2009.

Founded in 1989 by Toni Vighetto,  the Zigrollig company created short acrobatic and choreographic pieces from giant geometric shapes. The Zig is a choreographic sculpture based on curves set in motion by one or more acrobats or dancers, in a strange combination of the Cyr wheel, the topka and a mobile sculpture. Three acrobats bring a Zig to life in La Verita, created by Daniele Finzi Pasca in 2012. 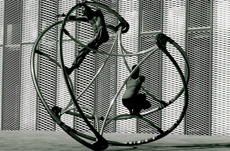 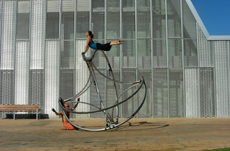 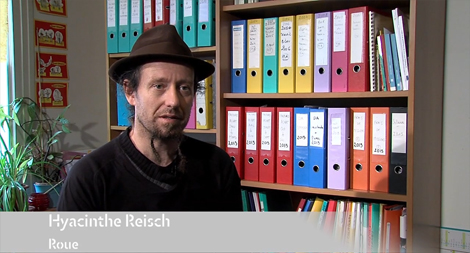