Man has always dreamed of being as mobile as the fasters animals, and has continually sought ways of running faster and jumping higher. Since the 19th century, acrobats have regularly invented simple, or incredibly sophisticated apparatus to propel them to heights and distances far beyond the capabilities of the human body. Propulsion techniques are multiple and give rise to the creation of group acts as well as a new register of individual practice. 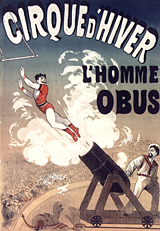 The origins of propulsion are clear: raising oneself towards the sky, attempting to get closer to the birds, the sun and Icarus is a temptation shared by all peoples. Long trampolines, springboards, trampolines, Russian swings and bars, the Hungarian teeterboard and the Korean plank as well as the trebuchet, catapult, crossbow and canon, all enable man to transform himself into an active projectile. He can then experience spectacular gliding flight, and enjoy extraordinary propulsion in order to develop a new repertory of figures, made possible by this fleeting extension of time. These instants see the propelled body carry out planks, twists and turns in space, before landing in a net, on a mattress, on a stretched out canvas or on a simple bar held by two carriers who carefully prepare for a precise landing. Since Archangelo Tuccaro's founding text, Trois Dialogues de l'exercice de sauter et voltiger en l'air [Three dialogues devoted to jumping and vaulting exercises] appeared, jumpers' imaginations have been shaped by the idea of propelling the body vertically or horizontally, using the pure physical force of the acrobats, or with the support of a specifically developed mechanism or apparatus. This ancient fascination was resolved with the inventions of successive eras. The principle of propulsion – the mechanical amplification of the human aptitude for jumping – draws both on war and entertainment, in a duality that actually characterizes the entire history of the circus rather well. 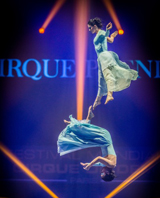 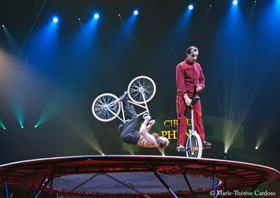 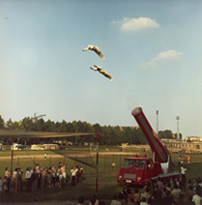