Man has always dreamed of imitating animals, and of borrowing their strength, agility, speed and ability to jump. For many living creatures, from the frog to the kangaroo, propulsion is a means of movement. It was therefore inevitable that man would seek to capture these remarkable skills and attempt to adapt them to human mobility. The stilts were a good substitute for a lookout tower for watching over flocks, and shepherds developed astonishing ease on these simple pieces of wood.

The principle of raising height is echoed in several urban myths and a few literary inventions from previous centuries. In 1837 in London, the legend of a character perched on "spring heels" was born: the creature was said to attack isolated passers by, and then disappear by leaping into the fog above the rooftops like a ghost. Springheel Jack fed the imagination of several generations of British adolescents, and found its first echo in the "moon shoes" designed in the 1950s, which were extravagant shoes equipped with springs to evoke a strange weightless effect. 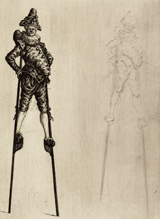 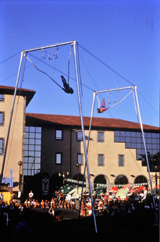 Powerriser and Skyrunners are types of stilts based on animal propulsion methods that enable spectacular jumps such as somersaults, in a new acrobatic development for very urban and sporty apparatus. The high level athlete Oscar Pistorius illustrated this technological conquest in the service of mankind in applications that were shown to be sources of progress. His silhouette, modified by the steel curves that provided him extraordinary mobility and enabled him to beat records, was an additional step in the symbolic appropriation of the jump and of flexibility: nourished by an exceptional physical constraint, it inhabits both the sporting world and that of two-legged men and women everywhere.

Pogo sticks and elastic stilts added to this aptitude for bouncing back, to create the illusion of heightened mobility, the principle motor among these various propositions.

The semantic analogy between stilts and the trampoline is amusing, quirky and disturbing: in Italian, trampolo means stilts, but the trampoline is said to have been invented by a Frenchman name Trampolin. One word links two apparently different disciplines – except in the case of the elastic stilts.

The difference between these pieces of bounce apparatus is simple: the trampoline, whether mini or competition sized, is an immobile object from which the acrobat jumps or bounces. The stilts become part of the acrobat's body and ensure explosive and flexible movement. Above all, they make him autonomous in his approach to the space.

Beach games also honour propulsions adapted to safety imperatives linked to regular use by the very young, but they benefit from equipment similar to that used in high level sporting activities and developed for spectacular purposes: trampolines with protective netting enable thousand of children to experience weightless jumps and to integrate a different rapport with space.

In contrast to acrobatic disciplines that find applications in the recreational domain, such as the flying trapeze for example, certain forms of propulsion invented for leisure purposes are sometimes reclaimed by show designers who see in them a form of resonance with daily life, the street or nautical activities. The Flysurf, a hydraulic propulsion system that lifts its "rider" several metres high on two sinuous columns of water, is an aquatic sport, but is starting to be incorporated into stage proposals like the Han Show, directed by Franco Dragone in Wuhan 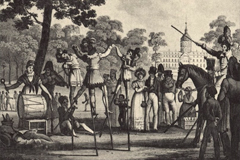 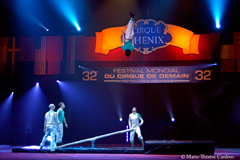