The agility artists that jumped on trestles – il banco – at fairgrounds in the 16th and 17th centuries, gradually saw their audiences increase in number. They performed in ever-larger, rival spaces, for spectators curious to discover new sensations. Forever imbued with the "Ever stronger!" adage of Nicolet, the director of the Grands Danseurs et Sauteurs du Roy, the acrobats no longer relied solely on their own leg power. They experimented with other methods of propulsion and worked on other apparatus. Some sought to add the fluidity, grace, and skill of 20th century artists, to the power, and technique of the 19th century "gymnasts." The world of athletics also provided a range of resources. Thus the trampoline offered the possibility of spectacular vertical ascents and controlled landings in a restricted space, as well as sequences of complex and fast jumps, along with comic stunts. Its elasticity opened new horizons for gymnasts in search of new supports that were easy to manoeuvre, light and designed using new materials.

Soon, the use of a bar, a small perch set up horizontally by Russian gymnasts in the mid-20th century, revisited and redistributed the roles of flyers and catchers. Slightly curved towards the ground in the middle, the bar measured 2.5 – 3.5 metres long, and could be round, flat or cylindrical, single, double or triple. It was more or less flexible depending on the weight of the acrobat, and looked like a gymnastic apparatus. The centre and ends of the bar are wrapped in adhesive bands to facilitate the catchers' hold and allow them to see markers. The catchers either hold the bar on their shoulders or clasp it in two hands against their chests, lifting it with their arms in time with the jumps and rebounds of the flyer. Having jumped up onto the bar, or run up a sort of small sloping ramp, the flyer is strongly propelled, or "thrown," before the eyes of the attentive audience. Part gymnastic demonstration, part attraction, and part artistic discipline, Russian bar exercises prolong and increase the flight possibilities offered by the banquine. They refined the trampoline and teeterboard repertoire by perfecting figures that aimed to provoke astonishment and admiration. 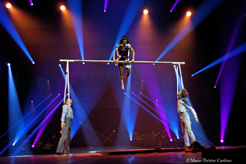 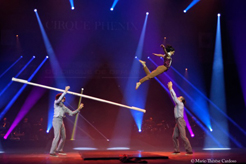 "This act goes beyond human limits," said Shen Wei Min trainer for the Russian bar for The legend of the Emperor and Jade, and he explained: "sometimes, the artists are afraid of failing." To be able to move a circus audience today, technical perfection is important but is not always enough. Some companies have decided to establish the performance within a narrative, as a derivative of one-upmanship, a resonance chamber for the feat performed, a poetic depiction of movement or quite simply, a nod to modernity.

Of all the circus disciplines, the Russian bar is one of the most recent as well as one of the richest. The acrobatic skills required include jumping and sense of balance, similar to beam work in gymnastics, but it provides endless possibilities for artistic expression. 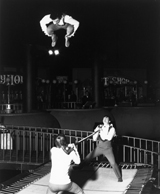 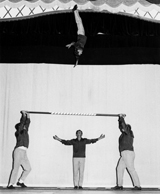 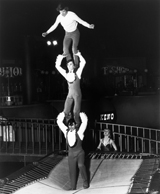 This attraction was created in Russian with Irina Shestua (1929-) and Boris Ysaev (1932-) who were looking for a new act. By watching artists perform on the asymmetrical bars, Boris had the ide of using two parallel bars, but he first had to find the right material for these bars, and in particular, determine what could be done on such a support. Adopting aluminium, he decided to limit himself to jumps and balancing. The first act took place in the Magnitogorsk circus in 1958 with Valentin, Boris' brother as the second catcher. Irina Shestua had the poise of a ballerina in her balancing and somersaults, which she made more complicated by jumping through a hoop. In 1960, she left Boris Ysaev to work for the twins, Babkin and Raphaël Asaturian (1928-). The initial set up of two bars had few followers apart from the Rennos (Antonio, Eduardo and Sergio), who made a career out of it from 1965 to 1970 by adding a comic touch to their exercises.

At the same time, another company proposed a formula with a single aluminium bar to which was added, at each end, thick elastics attached to the ground to increase propulsion and cushion landings. The idea came from Yuri Stepanov. The catchers Vilen Solokhine (1938-1998) and Evgueny Zakharov (1938-1978) threw Vyachelslav Teplov (1942-), their flyer, in double Arab jumps and double somersaults still executed perpendicular to the bar. The company performed in Paris in 1960 and 1967. Other ensembles such as the Butchaevs, the Dotsenkos and the Naidokines have kept this acrobatic style, performing in France in 1995. 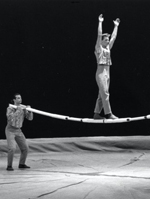 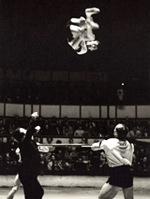 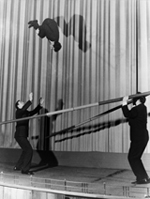 Patented in 1836 by Ignace Dubus-Bonnel, a merchant from Lille, fibreglass was to bring about a decisive development. It was Polish Marek Mecner who first had the idea of using a perch like that of Greek Giorgios Roubanis, who had won a bronze medal at the 1956 Melbourne Olympics. With this "elastic" bar, Alicja Okpisz performed the first double somersault.

In their wake came the Dymeks, the Metchkarovis, and the Koziaks, who perfected this new acrobatic form. For many, Lydia Koziak remains the finest flyer of the era. In France, Alexis et Patrick Gruss put on a superb act with Marie-Pierre Bénac, who turned not only a double somersault in the direction of the bar, but also a transversal somersault. The Boginos presented a bar act with catchers on unicycles, and the Folcos worked together in a column. The East Germans, such as the Morenos and the Salteros, performed multiple bar acts.

The material of these bars could take large deformations but lacked rigidity, thereby limiting spring capacity on take-off and landing. In 1977, the Moldavian Ivan Gerekliev, had the idea of combining several bars to form a plank (palka in Russian). Landing was easier, but the catchers had to learn to cushion the flyer's landing to avoid them being ejected. The artists took inspiration from trampoline techniques and carried out a chandelle (vertical jump) before taking off for a somersault. The catchers had to hold the bar on their shoulders instead of with their hands joined at the chest, or, like the Romanians, at their belts. With this palka, Irina, the daughter of Ivan Gerekliev, successfully performed the first triple in 1978, in Rostov-on-Don, with her husband Alexandre Moiseev. Alexandre and his pupils dominated the speciality for more than twenty years. In the Rodion company, Anna Gosudareva successfully performed the triple on the small bar and the quadruple on the palka during the 2005 Monte-Carlo Festival, and Zhan Iordanov currently performs the triple daredevil with the Anges at the Cirque du Soleil. 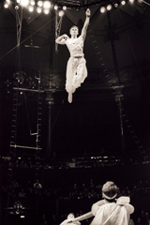 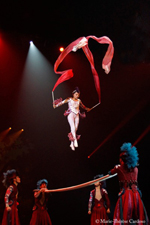 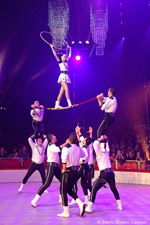 With the Corsaire, an act inspired by Adolphe Adam's eponymous ballet, Valentin Gneushev, one of the first Russian circus directors, paid tribute to the Russian ballets and to the choreography of Marius Petipa, with twin flyers and Igor Boitsov, an acrobat-dancer of such grace and presence that he was nicknamed the "Nijinsky of the circus." His triple somersault on the plank remains unforgettable.
Other successful examples include Romeo and Juliette by the Gvodetskaya company, where the bar was part of the décor, and in particular, The White Crow with Carole Demers and her catchers, Johnny Gasser and Yuri Kreer, a trio created for an innovative choreography by Alexandre Grimailo. Some Chinese acrobatic companies have also added elements of innovation, mainly by developing tandem jump combinations and theatrical presentations.