Ever since Fragonard and his swing, swinging has often been associated with the pleasures of childhood and the garden, but the movement impelled by a simple plank hanging from two strings also has something to do with the hypnotic force of the pendulum.

In 2009, the Académie Fratellini presented a show by Laurent Gachet, Dédale, le cirque des origines, where one of the sequences featured a huge double ram integrated into a wooden tower, intended to propel acrobats into sheets of transparent plastic stretched over the audience. The acrobats performed a ballistic curve generated by the leverage effect of the apparatus and formed releases and tricks from the power of each of the thrust. It was a spectacular interpretation of an ancient weapon and its impact was extraordinary. The source of inspiration for this unusual apparatus, the medieval battering ram used for demolishing doors and ramparts, falls into the category of war machines, but its regular, powerful dynamic also inspired the development of a new apparatus, the Russian swing. 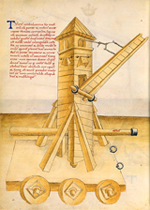 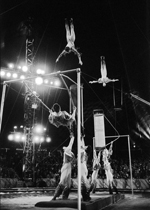 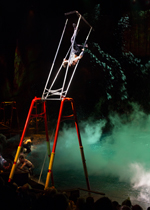 19th-century engravings show a portico installed near an isba to which narrow beams or wooden planks are attached to allow two people to sit at each end and thus drive a pendulum movement. Adapted for acrobatic use, the portico supports a wide wooden or metal platform covered with a non-slip material, allowing two or three pushers and a flyer to take their places on it. The distances and points of impact of the dismounts are determined by the number and energy of the pushers: the design of the swings can also influence the vertical or horizontal direction of these dismounts. The flyers traditionally land on a mattress carried and guided by two or four bases, who attentively follow the flight and fall of their partner. There are a few variations on the mattress reception: the flyers can dive into a pool, land in an inclined net or on the platform of another swing placed opposite the launching equipment. 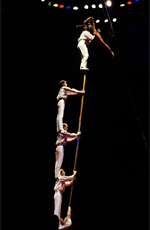 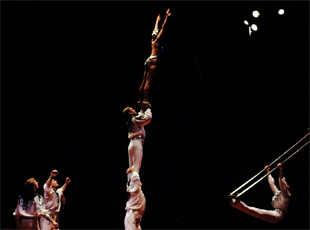 In the 1990s, the Kabanov troupe created an oscillating aerial platform act by combining the ample swinging of the structure with banquine lifts. The flyers, propelled from the ground, land on the moving platform, taking advantage of its swing to jump and fall back down onto the "benches" assembled by their bases. In 1996, the Estonian Ado Kosk invented the Kiiking, a discipline consisting of completing a 360-degree rotation using a swing equipped with steel rods of unusual length, that are adapted to the strength of its practitioners ... In 2012, the Circus Organisation of Russia produced Millenium, a quadruple swing act with apparatus hanging in the dome of the ceiling, giving rise to spectacular flights from one platform to another, protected by the presence of a net. The act, designed by Vladimir Doveiko, used tons of steel and amazed all those watching with the power that emerges from the four swings moving simultaneously. The landings were obviously from one platform to another, a technique accentuated in the large collective swing act in the show Varekai where the rigs are additionally placed on pivots, making them hugely mobile and providing numerous opportunities for changing the axis of flight. 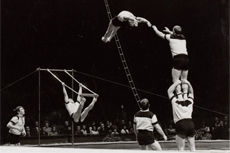 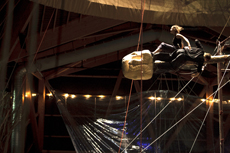 In the shows created by Franco Dragone, Ô in Las Vegas, The House of Dancing Water in Macau, Han Show in Wu Han and Dai Show in Xishangbanna, the flyers all dive into vast pools and combine the effect of flight with landing abilities which are incomparable to those imposed by traditional mattresses. In 1997, the graduating show of the 9th class of the National Centre of Circus Arts (Centre National des Arts du Cirque) in Châlons-en-Champagne, directed by Guy Alloucherie, C’est pour toi que je fais ça, used a Russian swing as central scenic and acrobatic element. The dismounts did not make up an act in themselves, but rather functioned more like a powerful subtext about the work. The swing effect, the management of the pendulum movement, the controled instability induced by a moving platform are as much pretexts for the creation of mono-disciplinary forms, where aesthetic is associated with technical research. Du Goudron et des plumes, the show by the company Les Mains, les Pieds et la Tête Aussi conceived and created by Mathurin Bolze, revisited the principle of the swing in giving a vast stage several square meters in size, an amplitude similar to that of the traditional apparatus, pretext to a fluid and strong artistic, acrobatic and choreographic reflection. The range and source of gestural and acrobatic inspiration proposed by the swing are well in tune with the possibilities of Lucien Reynes's swinging plan...