The human cannonballs completely embody the entire dramatic dimension of a circus attached to its fairground roots. Described as a sensational attraction, this type of propulsion, heir to the catapult and the trebuchet, in the image of that "reinvented" by Odilon Pindat and presented at the 30th Festival Mondial du Cirque de Demain, was used in the circus from the end of the 19th century. Zazel for example, was the female cannonball who was propelled over the three rings of the Barnum and Bailey circus. She was one of those reckless acrobats belonging to the "daredevil" category, a title shared with former Looping the Loop practitioners and a few other extraordinary performances, which saw mechanics and acrobatics combine to achieve an effect that is both short-lived and impressive.

Théodore de Banville's Odes funambulesques, in which "the clown jumped so high he broke the canvas ceiling and went rolling around in the stars," suggests a poetic setting for this raw energy that condensed all the deadly dimension of the circus into a few seconds. But there is also something of Fellini in this rather Baroque vision of flight and the transgression of limits. There is a partly sublime and partly derisive perception of the body that acts as a rocket, and crosses, in an ephemeral arc, the space defined by the spotlights' beams. 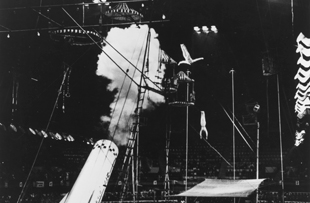 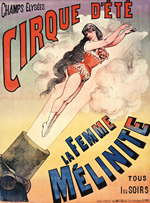 This appetite for danger and this obsession with voluntarily coming close to it, preferably while playing with the void, has imbued the circus since the creation of the flying trapeze, and with the invention of the "human projectile" it found a new kind of fulfilment. From the moment that a propulsion system was finalized, mainly through the use of compressed air, the discipline has continued to diversify with, for example, the Zacchini's double cannon or the monumental crossbow that replaced the traditional cannon in the Ringling Bros. and Barnum & Bailey 1996 show, Airiana, the Human Arrow. This new device enabled audiences to "see" the acrobat's body and to physically feel the impact, flight and landing in a net after a flight of some twenty metres. This attraction celebrated, one hundred years after the fact, the exploit of Alar The Human Arrow, created by the Zedora Sisters in England in 1890, and which was the highlight of the 1896 Barnum and Bailey circus programme. Propelled by the mechanical spring of a giant crossbow, the "arrow" Pansy Zedora (alias Pansy Chinery, née Frances Murphy, 1879-1969) pierced a giant paper target before catching the hands of her older sister Adèle (Mary Murphy Jones), upside down on her trapeze, which was about fifteen metres away. 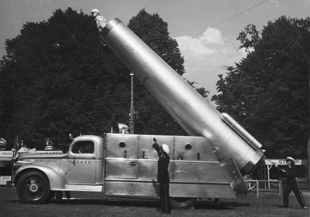 Sometimes, there is also a comic counterpoint to the "visual and sonorous explosion" of a cannon that is more accessory that genuine propulsion device. This is an amusing mise-en-abyme of a fairground trick absorbed by the circus until it has become one of its strongest images, just like the Death Wheel or Globe.