The art of leaping

Many animals use jumping as a way of propelling themselves from one point to another, to escape, protect themselves or attack. Early hunters would imitate the spirit and speed of the animal they were tracking, in a first step towards developing and codifying the skills of the fastest, most powerful and most agile group members. Jumping from one tree to another, leaping over a stream and crossing a chasm on a fallen tree trunk or tangled lianas, were the unwitting premises for acrobatics. These movements and positions, which stemmed from necessity, gradually developed a sacred dimension, before the essentials of a profane acrobatic repertoire were founded under the Han dynasty. Implicitly linked to the idea of surpassing, extending and forgetting limits, jumping very soon became the formal framework of dramatic movement.

The first identified tract on acrobatics, published in 1599 in Paris, was written by an Italian called Archangelo Tuccaro, who was the first saltarin of the king. It probably isn't a coincidence that its title wasTrois Dialogues de l'exercice de sauter et voltiger en l'air. A cause for competition in the 19th century, jumping was one of the main circus tricks. "Dangerous jump," "neck breaker" or salto mortale, the terminology is unambiguous and reinforced the deadly dimension of executing an ever more intricate and complex performance. Lion's jumps, cat's jumps, monkey's jumps, back flips, voltés and jack-knives reveal recurrent animal references and reinforce the link to hunting origins and rituals in acrobatics. The jump, an ordinary human propulsion principle, is an obvious source of inspiration for developing mechanical supports such as springboards, cushions and long trampolines, which multiplied acrobatic possibilities and increased the impact of a skilful take-off, until a remarkable repertoire was constituted.  The following step was to propel, ever further and ever higher, acrobats obsessed with taking flight and landing in a net, on a bar or on a mattress. Teeterboards, swings and Russian bars are the result of this ancient taste for jumping into the void, and the sensations that this procures on both sides of the circus ring: fascination, fear and admiration. 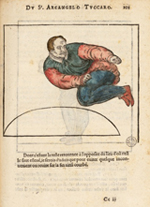 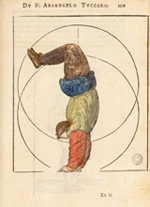 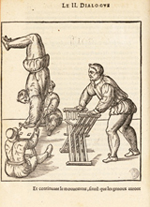 Jumps become acrobatics when there is flight involved, and playing with gravity is exploited to produce a dramatic effect such as a rotation, a figure, or when the boundaries are overstepped in unusual fashion. This generally agreed upon definition is obviously simplistic, as acrobatic jumps take on multiple forms.
Where does this diversity stem from? There are 4 key elements that can be cited as follows:

Spaces. Jumps can be made from surfaces that vary from horizontal (floor) to vertical (wall used for back jumps), facing up, down, forwards or backwards (as urban acrobats have demonstrated).

Additional cooperative supports. Jumps are made using devices or persons that either increase the range of flight (trampoline, teeterboard, Russian bar, one or more pushers), or diminish risk (landing pits).

Body extensions. Jumps are made by harnessing the body to instruments that constitute a genuine extension of the body such as in freestyle motocross (FMX) and Kite surfing.

The desired effects. Jumps are cat-like, made by bouncing and forcefully removing oneself from gravity and then stopping cleanly on landing like a gymnast, or giving an impression of fluidity by moving seamlessly into another action like skiers on a snowy slope.

These multiple possibilities are specifically update the physical techniques that can be described with the following three key points: firstly, impetus, flight, landing.

Impetus constructs the form of the jump from a group of actions that happen just as the acrobat leaves the ground. It makes use of the body's predisposition for jumping. Impetus comes mainly from the tension that will be produced by the interaction with the supporting surface. This tension mobilises action throughout the body: in most cases, this involves extending the lower limbs, positioning the pelvis in retroversion to stabilize the top and bottom of the body, and positioning the spine to generate flight effects. It also involves swinging the upper limbs to accentuate the effect generated by the support of the lower limbs and to orient the direction of the flight, and finally, a orienting the head in a specific direction. But jumps can also be made by using other parts of the body, such as the arms, back or even buttocks as a support! This predisposition shows a psychic, attentive and motivational mobilisation, as this impetus is such a critical action in daring to launch and fully engage in a jump. There is also talk of a particular world of signification that enables the acrobat to master the development of the jump. This is a specific commitment, which can be distinguished from "letting go" and " passiveness," and which generates the active construction of pertinent sensations for acting efficiently. 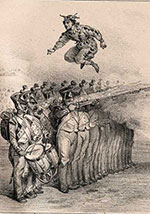 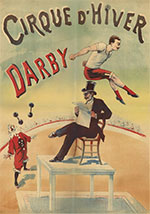 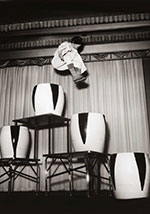 This is first of all a milestone sensation that has been experienced. From take-off, the acrobat feels the contrast between the universe of support or tension that he is leaving, and the aerial universe. This sort of freedom is often only relative because suspension is always put into perspective with landing. The stakes are double: on the one hand is the jump, with a reason for flight (executing a figure, or crossing a given space), and on the other hand is the landing, always present in the jumper's activity. Flight techniques for jumping are numerous and it is not possible to describe them all. 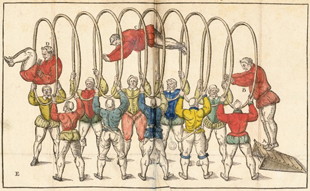 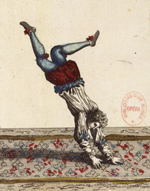 There are three fundamental properties involved for acrobats, regardless of the complexity of the activity during flight. They are emphasized here as follows: firstly, it is impossible to modify the trajectory of the flight from the centre of gravity (the trajectory is determined on take-off, and although movements around the centre of gravity are multiple, the peak and reach of the trajectory remain unchangeable). Secondly, it is extremely difficult to inverse the direction of rotation without another support (limitation due to the law of conserving the kinetic moment), and thirdly, it is impossible to get one's bearings efficiently during flight by using only earthly orientation habits (new ways of learning about position are currently being studied).

Landing entails not only the sensation of tension in the body generated by gravity. One can also "land" on vertical surfaces (for example acrobats jump off a trampoline towards a wall in order to rebound off it for another jump towards the trampoline below), without undergoing such strong pressure. Landing is more about interrupting rotation movements that take place during flight. Landing is constructed early in the flight by estimating the possibilities: are the flight conditions sufficient to use the flight for something other than preparation for landing? This estimate is based on monitoring foreseeable conditions on contact during the flight, enabling preparation for landing to be adjusted at the same time as the flying feat is carried out. This monitoring involves advanced technical skill (using pertinent indicators for the development for the jump, monitoring at key moments, ensuring that monitoring does not interfere with the aim of the jump, etc.). There is therefore a progressive preparation depending on the multiple forms of landing, which are as follows: stabilising the position, rebounding, sliding in gently, moving into another activity, etc. And once again, at the moment of contact, numerous techniques are involved.

Acrobatic jumps conceal a broad ensemble of possible arrangements of physical techniques in relation to multiple contexts. This is probably why the discipline is so immensely creative and complex. 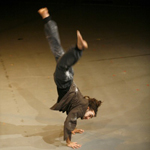 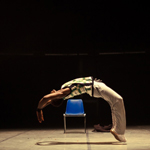 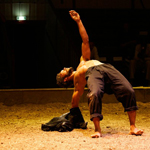