The origins of Icarian Games lie in two sources: one, legendary and imprecise, lost in the depths of time and possibly linked to the myth of Icarus; the other, more reasonable, is attached to an innovative act by "Professor" Richard R. Carlisle (1814-1874), better known by the professional pseudonym of Risley. Risley was an acrobat who, around 1841, thought of substituting young children for the traditional accessories used by antipodists. The Anglo-Saxon world naturally adopted the name "Risley Act" to define this propulsion technique, whereas continental Europe preferred to maintain the name of "Icarian Games" to identify the work of the numerous companies that demonstrated this discipline between 1880 and 1920.

The link with Icarus, although tenuous, may be found in the image suggested by certain figures. The flyer, with outstretched arms, is propelled by the feet of the pusher, and appears to both fly and fall at the same time. The rotations of the body symbolise, mainly for Egyptian acrobats, the movements of the sun and can therefore also be associated with the unhappy story of the Greek hero. 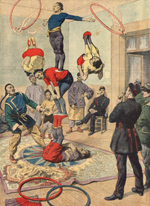 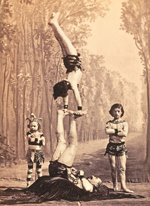 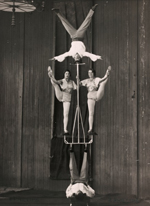 The Icarian Games belong to an acrobatic repertoire that covers several circus territories popular in the Middle East and in Asia, particularly in China where various companies have made this act their speciality. The Silk Road definitely helped to export this technique to the west, probably as a mix of antipodism and Icarian Games, and created confusion owing to the fact that certain companies propelled both flyers and accessories. Icarian Games are often a family affair and the number of companies practising the act increased at the end of the 19th century.

They worked on stage, in the ring or on a mat set down in the middle of a group of onlookers, in the open air, like most of the acrobatic companies working on mats. The most famous of all was probably the Schaeffers, ten members of the same family with several very young flyers, trained in acrobatics and dance. They paid particular attention to their costumes and décor, and their act held top billing for many seasons. The eleven Lorches and the ten Allisons, as well as the Frilli, the Kremo, the six all-female Daïneff and the Craggs, were all family companies – an essential dimension that guaranteed a permanently high standard of acrobatics and maintained the reputation of the company. With the notable exception of the Craggs, all these families used the trinka, a small inclined bench-chair that supports the back and raises the lower back of the pusher. The Craggs worked on the ground, using a partner's back as a support, which constituted an additional level of difficulty in carrying out the figures. 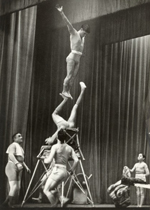 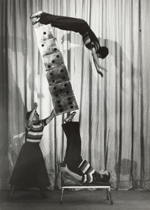 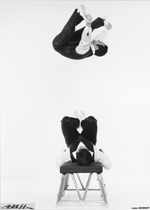 In 1870, the Georges family pusher worked with his lower back resting on a sort of "embankment" covered in red velvet, halfway between a trinka and the support used by Asian companies. The Chinese and Mongolian acrobats used a small cushion tied to their waist, which allowed great mobility when developing their exercises. Combinations of disciplines are frequent, and companies often mix Icarian Games with meteor juggling, which uses small glass dishes filled with embers or a small candle. Some, such as the Shanghai acrobatic company combine Icarian Games with the teeterboard, while others, such as the Tianjin and Shandong companies prefer technically simple yet unique acts. 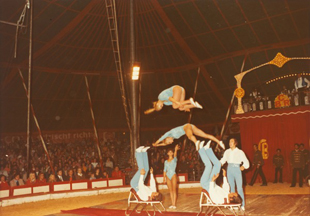 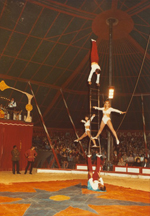 The decline of the great companies in the decade that followed the First World War almost saw the end of Icarian Games, but gradually, duos, trios and foursomes began to replace the big companies of the beginning of the century, and acts such as those by the Rios, the Castors, the Bedini and the Bogino were very successful for several decades. In the 1990s, the discipline fell somewhat into disuse, was taught little in western schools and was not in demand with the traditional circus families. The Kurbanov, a circus act by Valentin Gneushev in 1993 in which Harley Davidson motorbike saddles were adapted for use as trinkas, and the Rampin Brothers, hired for Varekai in 2002, are among some of the most notable examples of the period. For some years now, the Addis Ababa school in Ethiopia has regularly produced Icarian duos and foursomes, armed with impeccable technique and using pushers who are usually older than their flyers, but also sometimes adults of a similar build.

A duo formed in 2010 by Ethan and Marie-Pier at the Montreal National Circus School shed new light on the discipline by playing with an inversed dynamic, preferring contact and sensuality to pure explosiveness, while combining incredibly fluid acrobatic sequences. They are an exception in a repertoire that focuses more on skilful acrobatics than the meaning of the feats, but they provide a wonderful opportunity for opening up the discipline to other interpretations. 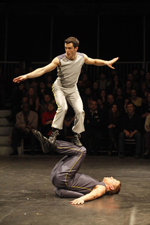 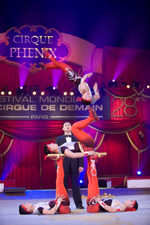 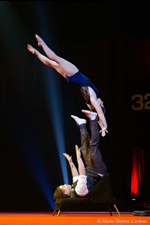