The fairground part of the circus show, a show of curiosity and extremes, plays a lot on physical strength, more or less raw, more or less warlike. Valued and practiced in gymnasiums, "Physical Culture", a term coined in the 1880s by Edmond Desbonnet based on the teachings of Hippolyte Triat, magnifies health and an aesthetic form that spans the 19th and early 20th centuries. Recognised in their own field of activity, adorned with a "gift of strength" that is often a family affair, like Prudent Landry from Quebec, The King of the Jaw of the Belle Province, or the Brumbach family, the strong woman or "Hercules" take on a new dimension as the ancient or historical hero whose names they have adopted: Athena, Apollon or Attila. Another battle, the struggle for the recognition of women, led Katie Brumbach, The Woman of Steel, to rename herself Miss Sandwina after defeating Friedrich Wilhelm Mueller (1867-1925), the emblematic Sandow, a compatriot. 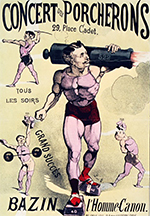 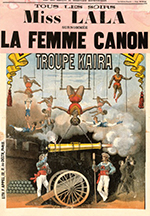 Strength is a recipe for success

But the "art of strength" requires a staging. Louis Cyr from Quebec and Eugen Sandow from Germany respectively set up a circus and a troupe of various artists to showcase their exercises. In addition, at the end of more or less glorious military campaigns, the cannon was displayed on the stages of theatres or in circus rings. It propels human projectiles or fires at a height of three metres from the ground, chained to the jaws of Miss Dorina or Olga Kaira. It throws heavy cannonballs that the Hercules, Realta Boisset, The Machine-Gun Woman, or Holtum, The Cannonball Man, stop with their hands or chests and roll on their shoulders or thighs. The series of " feats of strength " and " gym games " leads to a form of juggling that is called power juggling. 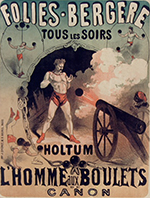 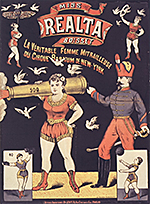 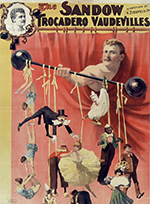 Juggling cannonballs is part of this very demonstrative category where, from one century to the next, Bazin, Samson or Arthur Robin, Mr. Universe, twist iron bars or break chains. Or it serves as a warm-up at the beginning of performances purely dedicated to juggling, such as those of the Germans Claudia Alba who juggle with heavy steel balls, Severus Shaeffer1 or his contemporary Paul Cinquevalli, who catches a cannonball in a ceramic dish held between his teeth, without breaking it, as he did with an egg when he was nine years old. Trained first in aerial acrobatics, the flexible juggler deploys a wide range of throws, balances and contacts, including a tub, a heavy wooden tub of an impressive diameter that he swirls in the air with a stick before releasing it so that it plants itself on its way down on an iron spike on the top of his head... at the risk of being crushed by the machine if it drops off centre. He has many followers, such as Paul Spadoni, Paul Conchas or Henry Nadden, but none of them covers the entire spectrum of his performances! 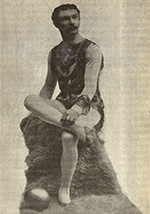 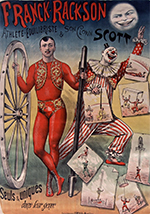 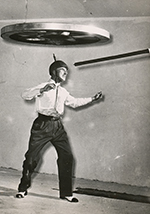 L’Athlète, in its edition dated 4th of April 1897, refers to a "passing" carried out by the Trio Léonin with four forty-pound cannonballs crossing each other over the head of one of the brothers, Jean. In their notebook n°7-40, the Vesque sisters describe how Relda in 1926 at the Cirque de Paris rolls cannonballs received on her neck, sends them back, catches them, throws them again... Her partner, like Brim, is dressed as a funny sailor. The Moscow Circus on tour regularly introduces jugglers from the Russian school of master Anochin Vjadscheslav, such as Valentin Dikul at the Palais des Sports in Paris in 1986. He performs a series of exercises with steel balls of decreasing weight, from 50 to 500 kg, like Vsevolod Hertz in the 1950s. But it was on ice skates that Vladimir Margoslepenko juggled with steel balls during the presentation of the Moscow Circus on Ice in Paris in September 1979. Whether they want to test their strength or agility, artists often draw their inspiration from regional traditions, such as contests of strength between villages. Thus, the young Tulga, like his predecessors of the Hishig Davaa Troupe of the Mongolian State Circus on tour in France in 1992, juggles with several logs and manipulates heavy poles of at least two metres that rotate around his neck and waist before standing up, in a balanced position on his palm. Coming from the same festive customs, Chinese jugglers handle clay vases that are increasingly large as the confrontation progresses. They throw them and receive them on their backs, kidneys or neck, first with flexibility and a certain fluidity of movement. Then when the heaviest items are thrown, they wait and take the blow, bent forward, camped on their legs, standing still. On tour, Chinese acrobatic troupes sometimes include jar juggling numbers, which, made of resin, make it possible to revisit the number, also easing the tension to encourage a loose choreography and new passings.

Contemporary artists endlessly renew everyday objects that can be used in their juggling. Jérôme Thomas in his early days trains and plays with pétanque balls and in 2017, Thomas Staath, of the PCCR Company, grabs race car and truck tires to develop multiple combinations fuelled by great ingenuity combined with an uncommon strength. Finally, there is undoubtedly a symbolic connection between the Landry father and son, who first exercised their strength in the forests of Canada, and Claudio Stellato's four acrobats in La Cosa (2016), who persistently throw endless logs, pretexts for strange installations. 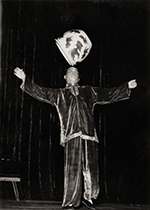 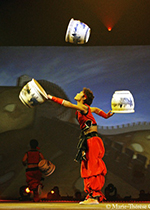 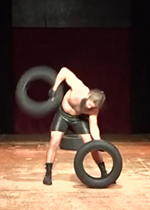