Juggling, the periodic manipulation of objects, consists in throwing and catching objects with dexterity, by continuously performing a series of tricks. It can be practiced with all types of objects, including sickles or scythes.
Although the first traces of this activity date back to ancient Egypt, and documents attest to its popularity in ancient Rome and its survival in the Middle Ages, juggling only became separate from object manipulation and magic at the end of the 19th century. Thanks to the innovations of Paul Cinquevalli (late 19th century) and Enrico Rastelli (1920s), it has established itself as an autonomous and fertile branch of juggling, to the point of becoming synonymous with it in everyday language. 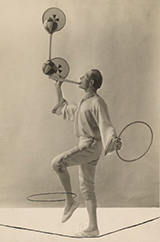 Nevertheless it is the so-called symmetrical juggling, with objects of the same type and "standards" (balls, clubs, rings) that became established in the 20th century. The industrial manufacture of these objects has contributed significantly to the emergence and expansion of an international community of amateur jugglers, recently amplified by the rise of the Internet. At first exclusively aerial (with throwing objects upwards), juggling was enriched by manipulation in the horizontal plane (rolling objects on the ground) then by bounce juggling (throwing downwards) and, the latest major invention to date, by pendulum juggling (of suspended objects that cannot fall). The alliance of juggling with each of the circus arts, with dance, music or theatre also remains one of the main sources of its renewal.
Around the 1980s, juggling entered a new period in its history, marked by the affirmation and public recognition of its artistic power and works, by the unprecedented increase in the number of jugglers and the diversification of styles, by the discovery of the mathematical equations that govern it, by the crisis and deconstruction of all its properties (visibility and tangibility of objects in particular) and by the trivialisation of virtuosity and its incredible poetic fertility. 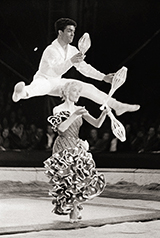 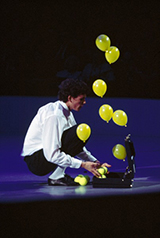 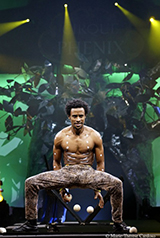 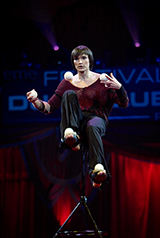