On the perfect curve of a Greek crater, a hoop seems to evolve with the same simplicity as if it was rolling on the ground. A masculine silhouette gives him the necessary impulse to create this almost magical sensation of an object with its own life. This notion of freedom granted to an a priori inanimate accessory is at the heart of the fascination felt by the spectator for regular and concentric movements generated by the hand of the person who orders them. 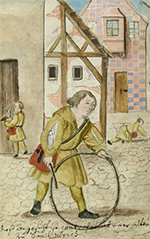 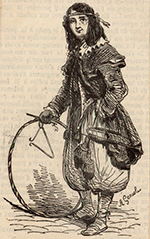 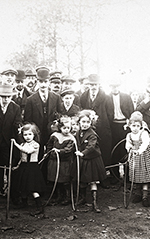 Regarded as a game, many 19th century illustrations show children propelling a hoop with a stick and running with it. In the 1930s, American Howard Nichols seemed to be the first juggler to mix this hoop game with juggling compositions. A few decades later, Bob Bramson embodies with incredible elegance the figure of the hoop wizard, capable of a quick and skilful wrist impulse to bring his accessories to life in an unusual format. What fascinates and dazzles the audience is the ease with which the hoops slide, rotate, turn and return into Bob Bramson's hand. Combining composition, contact, rebound and flatness with the same dexterity, he presents until 1996 a number full of energy that ends with a "tidying up" sequence where the hoops almost spontaneously return to a small box placed in the centre of the stage or the ring. 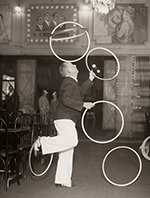 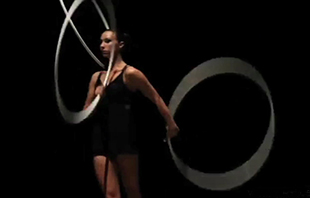 Bob Bramson plays with an exemplary fluidity that Alexandra Savina, trained at the Kiev Municipal Academy of Variety and Circus Arts, takes up on her own by handling hoops of the same diameter with astonishing ease. She manipulates them both on the ground and on her body, creating a virtuoso technical and choreographic work. This notion of coordinated and controlled movement is also perceptible in a new sequence of magic where a few dozen balls equipped with integrated lighting skilfully propelled into the darkness create the illusion of a multitude of concentric circles suspended between sky and earth. At the intersection of practices, while Notre vie by Colas Rouanet integrates flatness into the development of juggling sequences with a perfect fluidity of sequences, Kosm, a show created in 2012 by La Tournoyante Production, explores the body-to-object relationship in a different way and multiplies the combinations from wheels and hoops that are propelled or manipulated. In 2007, Gulko created Moby Incarcéré, a show by the Cahin-Caha company where he manipulates spheres at the heart of a crater shaped performance area, a way of playing with space by drawing fugitive constellations and inscribing the surface as another medium for play.