Fuelled by multiple influences, the repertoire of balanced juggling is inexhaustible and has been growing richer and more complex since the 19th century. 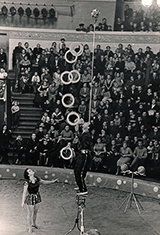 Juggling while balancing on a wire, on horseback, on a mobile or immobile apparatus, the diversity of possibilities contributes to developing the creativity of jugglers over the centuries for the implementation and evolution of a singular vocabulary. The notion of combination is fundamental to define and illustrate the most successful forms of balanced juggling as practiced by artists such as Enrico Rastelli or the Reverhos. By manipulating hoops and clubs while balancing on a ball or wire, jugglers fuse techniques and introduce a mixture of disciplines. Juggling on horseback, on a galloping animal, as Léopold Loyal or Charles Ducos did in the 19th century or Stephan Gruss in the 1980s, opens the way to balanced manipulation on mobile devices such as bicycles or unicycles, but also rollerblades or ice skates. The Chinese Gao Jin, amazed the French public in 1983 when he presented his act of throwing cups and saucers propelled with his foot, constantly increasing the level of difficulty by simultaneously throwing two, then three cups and their saucers for them to get  stacked on his head without breaking a sweat.
Individual or collective discipline, balanced juggling has enabled many troupes, from Selbinis to Drogaleva, to make it a specialty. For a very long time demonstrative, this variation of manipulation is based on a symbolic demarcation between a vertical dimension of juggling, explicitly spectacular, and a horizontal dimension often more conducive to writing and narrative. However schematic it may be, this duality feeds the practice of contemporary jugglers and paradoxically offers them the opportunity to create new... combinations. 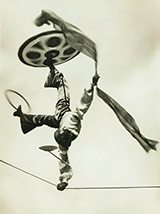 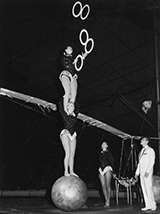 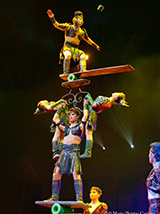 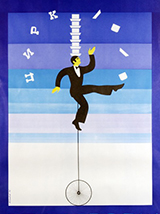