The notion of composition is fundamental to define the principle of balanced juggling from one millennium to the next, but it is also driven by the idea of overcoming, the implementation of limits that are tirelessly pushed back or thwarted. There is something fundamentally human about this, an expression of individual or collective ability fascinated by the complexity of random juxtapositions. 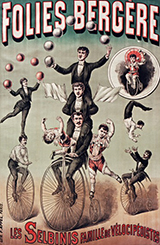 One of the first temptations for jugglers is to perch on a pedestal or on a wire, a way to increase the visibility of their exercises, whether it is periodic juggling, manipulating asymmetric objects or games of skill. They make them more complex and thus increase their spectacular density. Ancient bas-reliefs and medieval miniatures record examples of mixed prowess, representations of jugglers mixing balance and object manipulation. From Chinese tombs to incunabula in the West, a first repertoire of forms emerged during the first millennium of our era and prepared the development of ever more elaborate performances.
In the 18th century, riders like Price or Balp integrated juggling into equestrian acrobatics and set new standards of virtuosity. This new dimension multiplies the perception of prowess and contributes to the transformation of disciplines. By gradually associating itself with the emblematic techniques of the different periods of the evolution of acrobatic, fairground and circus practices, juggling implicitly imposes itself as one of the determining elements of the artistic diversity. 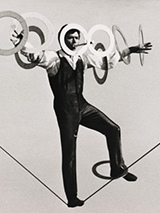 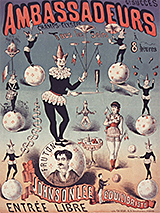 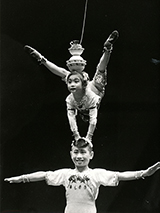 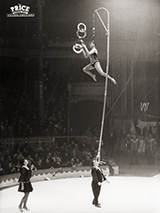 When it comes to combining balance on a wire and the manipulation of multiple objects, from parasols to hoops, the name of the Reverhos stands out naturally as their performance seems to clearly merge this visual and technical tension between instability and mastery of both rotation and tempo. Balancing on one arm on the wire, the artist rotates, twirls and spins fascinating combinations of objects with almost every part of his body. Borrowing from Rastelli as well as from Barbette, the Reverhos mark the time of balanced juggling. Jacky Lupescu and Rudy Horn will be worthy followers.
This idea of "enhanced imbalance" is also part of unicycle juggling, a Chinese number developed since the 1950s. One of the masters of the discipline, Gao Jin, amazed the French public in 1983 when he presented his act in which he threw cups and saucers with his foot, constantly increasing the level of difficulty by simultaneously throwing two and then three cups and their saucers to make them stack up on his head without breaking a sweat. All this, of course, while maintaining the balance of his unicycle with his other foot. The technique was also mastered by Angelo Ballan and, collectively with a combination of throws from one female juggler to another, by the Inner Mongolia Acrobatic Troop. 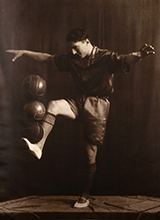 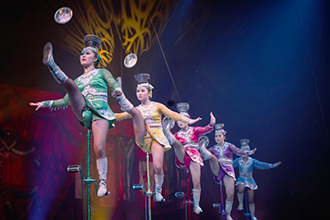 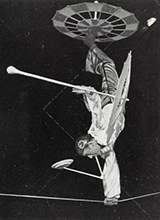 Considering the horse as a moving pedestal, the ancient desultor is a precursor and the vogue of equestrian acrobats in the 19th century offered many of them the opportunity to combine dexterity and galloping by creating the first complete numbers of horseback juggling. This fusion of genres is then very much due to the multidisciplinary nature characteristic of children born in the profession. Skilled on the ground and on horseback, they naturally integrate several techniques to create a new one. Auriol, a fabulous jumper, is also an excellent juggler and his riding ability offers him endless possibilities for virtuoso crossovers.
In the 1920s, when the aura of the equestrian circus began to fade, complex and sometimes mobile structures replaced the horses and the technicality of the jugglers was fuelled by other challenges. Enrico Rastelli multiplies the supports, from the elaborate pedestal to the simple balloon, and in turn marks the time of an untiringly complex juggling, constantly multiplying the objects to design ever more improbable combinations. His gestural purity helps to erase the naivety of his performance and then transcends it into a sequence that is both poetic and stunning. A mixture of emotions that elegantly and sometimes with a hint of humour characterises an astonishing hierarchy of disciplines. 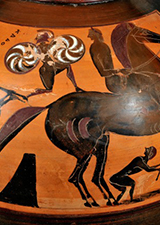 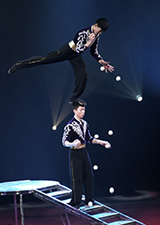 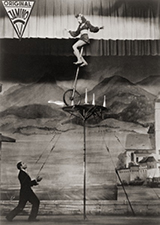 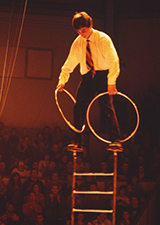