In 1855, the amusing physics device merchant Jean-Baptiste Delion (1818-1866) published the first issue of his Almanach-manuel du magicien des salons, ("Almanac-manual of the parlour magician"), in which he described the entire repertoire of the prestidigitators of the Second Empire. This reference manual, which is published every year with a calendar, uses the term "parlour magic" to describe a form of show that both professionals and wealthy amateurs practice using equipment specially designed for magic tricks.

It is the use of these specialised devices that seems to us to be more decisive than the place of representation when it comes to defining this parlour magic: in fact, it is applauded in high society parlours as well as in physics firms, fairground huts or theatres. It is closely linked to the development of the manufacture and marketing of ad hoc devices, which began in the second half of the 18th century in France and Germany. 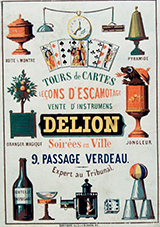 Around the middle of the 18th century, amusing physics firms appeared in Paris. A handful of skilled artists, such as Charles Rabiqueau (around 1712-1784) or Nicolas-Philippe Ledru, known as Comus (1731-1807), adapted the tricks of the fairground entertainers to the scientific curiosity from the high society at its peak. The illusion tricks, dressed in a pseudo-scientific discourse, take on the appearance of real experiences with sophisticated devices. These experiments tend to prove the discovery of new physical principles that the Parisian elite is then fooled by and fond of. The artist-demonstrators thus claim the title of "physicist" and find in this new form of show a new artistic identity but also a certain scientific legitimacy, regularly denounced by scientists as a pure imposture.

From 1766 onwards, Comus obtained a royal privilege to establish a factory for "all kinds of physics instruments", but it was only a few years later, with the publication in 1769-1770 of Nouvelles Récréations physiques et mathématiques ("New Physical and Mathematical Recreations") by Edme-Gilles Guyot (1706-1786), that the worldly public discovered with amazement the rigged devices used by Comus to parody the fashionable experiments in experimental physics. Guyot's works, quickly expanded and published in a periodical form, reveal the entire repertoire of amusing physics. At the end of each of the four volumes we find a published list of the devices sold by the author, with their prices, making it the oldest magic catalogue. The 108 or so devices on offer for sale are very varied, using magnets, optics, mechanics or electricity: will you be tempted by changing cards, the magic star or the book of destiny? 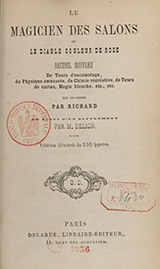 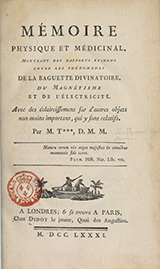 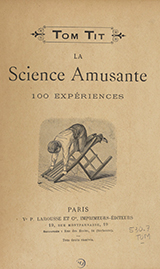 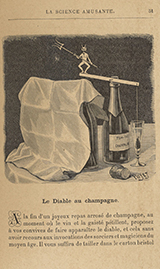 Thanks to Guyot's devices and works, the new kind of show initiated in Parisian amusing physics firms – at the crossroads of science, playful learning and conjuring tricks – finds a European echo. In Germany in particular, the manufacture and marketing of similar devices was initiated by Peter Friedrich Catel (1747-1791) in Berlin but was mainly developed in Nuremberg in the workshop of Georg Hieronimus Bestelmeier (1764-1829). In France and Germany, the devices that made the Parisian pioneers famous, such as Comus' "learned siren" (Nicolas-Philippe Landru, 1731-1807), are manufactured, sometimes miniaturised and assembled in luxury boxes, to be sold to wealthy amateurs. Thus, a wide variety of surprising, playful and sumptuous devices invade the worldly parlours and announce the parlour magic of the 19th century.

Physicists in the theatre and the first magic shops 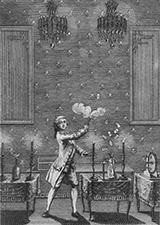 Paradoxically, if Guyot makes the instruments and secrets used by Rabiqueau and Comus shine on a European scale, his books also sound like the unveiling of the illusions that have deceived the Parisian elite and sometimes even the scientific world for twenty years. They certainly contribute to the disappearance of the "fake" physicists. From now on, in addition to the street and the fair that they have never left, it is on the stage of the theatres that the next generation of prestidigitators are seeking to make their mark. We could think that the presence of prestidigitators in the theatre would put an end to the ambiguity of these firms, which had assumed the role of scientific institutions. Now innocent by the theatrical convention, the prestidigitators nevertheless took care to keep – until the middle of the 19th century – their title of "physicist" and for their tricks the name of "experiments". The most famous artist of this generation is the Italian and Enlightenment adventurer Giuseppe Pinetti (1750-1800), who has great admiration for Comus' dual theatrical and scientific success. He spent a quarter of a century performing in the royal courts and theatres of Europe with unprecedented success1. In the early years of the 19th century, the first permanent prestidigitation theatres were created in Paris, like the establishment of the Hôtel des Fermes, which was successively run under the Empire by Olivier and then under the Restoration by Comte.

From the time of the Revolution, a first shop specialising in prestidigitation devices opened at the Palais-Royal on the initiative of the prestidigitator Antoine Préjean (around 1745- ?). Its catalogue lists some 228 "experiments and tricks" that he demonstrates and that he offers for sale. In addition, the equipment used by prestidigitators is also sold or manufactured on demand by tinsmiths who need to know the basics of prestidigitation, as shown in the small chapter dedicated to "amusing physics instruments" in the Manuel du ferblantier et du lampiste (1830) published by Roret. At the end of the 1791 Parisian edition of Amusemens physiques by Pinetti, it is specified as follows: "One will find these ready-made cups at the premises of Mr. Rougeole, a tinsmith at the Louvre [...] One will find in the same premises various objects concerning the said work. "In the inventory after the death of this Pierre Roujol (?-1802), among the hundreds of objects of all kinds found in his workshop and shop, are mentioned "two conjurer mills, valued at two francs" and "one conjurer throne, valued at fifty centimes2". 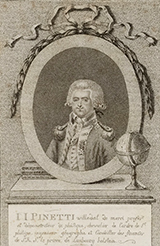 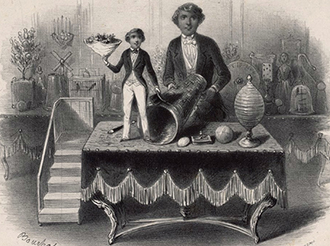 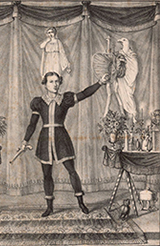 Alexandre-François Roujol (born in 1776) inherited his father's workshop at the dawn of the 19th century. A former official supplier of goldsmith's pieces for Napoleon I, he specialised in the 1820s in the manufacture of amusing physics instruments. It is in the shop on rue de Richelieu of this "father Roujol" – as he is affectionately nicknamed by Robert Houdin in his Confidences d’un prestidigitateur  – that the elite of the prestidigitators meet under the Restoration. In 1834, Roujol published a catalogue of the 132 "principal instruments of amusing recreational physics, skill and game tricks" of which he was the inventor and manufacturer. It contains the main effects practiced by the magicians of the time and that Robert-Houdin will help to perfect, such as the mysterious Orange tree. 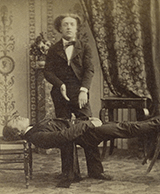 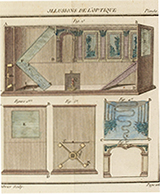 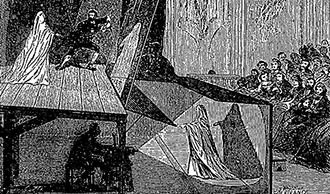 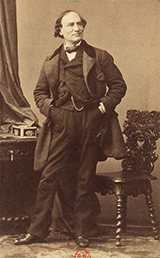 The rise in the social status of prestidigitators and the creation of Parisian theatres dedicated to prestidigitation since the beginning of the century have made it possible to bring this discipline to the highest social classes in society. Prestidigitators like Comte or Jean-Eugène Robert-Houdin thus became a popular attraction at social events. By creating his Soirées fantastiques ("fantasy evenings") at the Palais-Royal in 1845, Robert-Houdin intended to recreate the refined universe of the bourgeois parlour to give it a permanent show of what we can call, more than ever, "parlour magic". Following the same model, from 1857 onwards, the Hofzinser couple welcomed the public to their home in Vienna, in the Wilhelmine Hofzinser Salon.

A series of Parisian stereoscopic views taken around 1860 give an idea of the sessions of an anonymous parlour magician surrounded by an abundance of devices. More generally, Sidney W. Clarke gave the name of decorative conjurers3 to the prestidigitators of the mid-19th century who showcased the luxury and abundance of their sparkling instruments, both as stage sets and as a demonstration of their prosperity. This phenomenon is led by the great figures of Bosco, Döbler, Philippe, Anderson, Bénita Anguinet and Robin. In their two- to three-hour shows, some or all of the devices displayed on the grandstands at the back of the stage are paraded in the artist's hands. In contrast to this trend, Alfred de Caston (1822-1882), a pioneer of modern mentalism, ironically refers to his contemporaries' "brilliant cabinets of amusing physics", which sometimes resemble "the display of a Flemish kitchenware, having in his eyes no other merit than the amount of money spent to own them."[Alfred de Caston, 1858]. 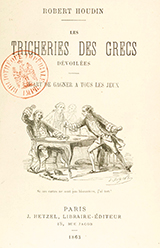 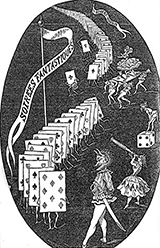 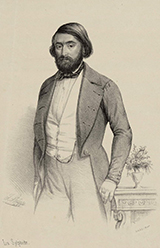 This aesthetics of abundance and the appeal of mechanical parts should be seen in parallel with the unprecedented development of the manufacture and trade of prestidigitation instruments at that time. Around the middle of the century, the prestidigitator and metalworker André Voisin (1807-1875) opened his workshop for the manufacture of amusing physics instruments on rue Vieille-du-Temple, which would be taken over upon his death by his grandson Émile Voisin (1857-1918). Thanks to the talent of the Voisins in the work of bronze and marquetry, their company has established itself as the best manufacturer of prestidigitation equipment of the century. Until the turn of the century, wealthy and professional amateurs from all over Europe purchased their equipment there to set up their "cabinet" of physics equipment [Voignier, 1993]. The engraving he then published in the entire press gave an idea of the image of magnificence that Voisin wanted to give of his business. Its comparison with a magic theatre scene like that of Bénita Anguinet at Le Pré-Catelan in 1856 is disconcerting: it is difficult to distinguish the theatre from the shop. 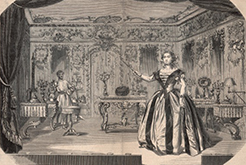 The reign of parlour magic comes to an end 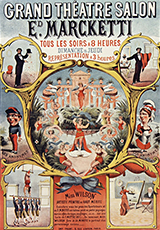 While the production of luxurious parlour magic objects by the Voisins continued until around 1900 and competing workshops such as Carl Willmann's (1849-1934) in Hamburg continued to supply the world with devices, the discipline underwent profound changes from the mid-1860s and for half a century: they gradually pushed back parlour magic and its share of shiny devices.

First of all, the fascination for spiritualism, mentalism and then hypnosis takes magic down new paths and leads to the reconversion of a certain number of prestidigitators towards more stripped-down forms of entertainment. Then, at the turn of the century, prestidigitators became an essential attraction of the emerging music-hall genre. This change profoundly affects the form of representation, which is now often reduced to a single performance in a varied programme, requiring no preparation of the stage and giving pride of place to the so-called "manipulation" acts. Finally, what remains of Parisian parlour magic was largely torn apart at the beginning of the 20th century by the unprecedented development in the United States and England of both the close-up on the one hand and the shows of great illusions on the other hand. 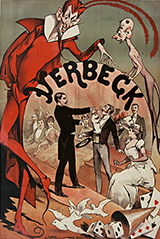 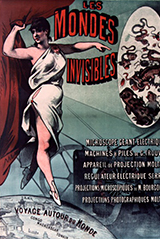 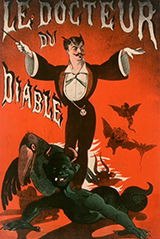 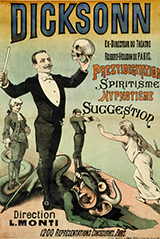