“Passage air bas, an attentive and pronounced pace, the reins of the bridle in the left hand, those of the snaffle in the right, directing the horse’s muzzle slightly to the side; the thighs turned inward, the knees bent, the legs free, the lower back firm but not stiff: as long as you do not mount like that, it is known as ‘grinding pepper’ or ‘grating sugar’”. Georges Delafosse, « Un tour au cirque », Le Journal Amusant, 1875

This rather fanciful legend of the illustration created by his own hand reflects Georges Delafosse's admiration for the rider's technique, but also the extreme specificity of the language of equitation. The squire represented is certainly Charles Franconi, associated with the direction of the Cirque d'Hiver de Paris by his father Victor and teacher, like him and like his grandfather Laurent. The classic riding scene of the first part of the 19th century must admit that it owes much to the circus and in particular to the alliance between Laurent Franconi, the first rider to perform with a school horse at the circus, François Baucher, who presented his new riding method at the Cirque des Champs-Élysées from its very first opening in 1835, and Jules Pellier. Like Baucher, known as "the Centaur" on his horse Partisan, the goal and pride of the school riders is to seem to be one with their horses without any noticeable pressure or reliance on the use of aids. 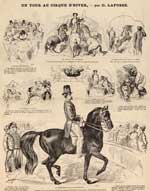 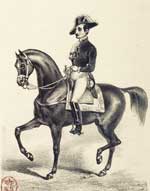 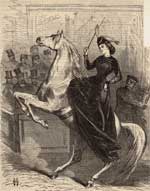 The school of horses and riders

Alexis Grüss is reluctant to use the notion of dressage or horse training. He educates, he instructs those around him based on the intelligence of the student, made up of a form of judgment and memory that is the basis for understanding and acquiring habits. We are talking about haute école, yet is there such a thing as a basse école or low school? The distinction, presumed to be condescending, refers mainly to two phases of horse education. The first phase ensures an almost indispensable preparation for any use of the mount, whether it is for military, sports, indoor or outdoor use. When the horse is broken in, it goes through sessions of methodical softening of the body parts that offer resistance or heaviness, jaw, neck, haunches and loins. The squire is first of all on foot, next to the horse, for work on the flat, between the pillars, according to tradition. 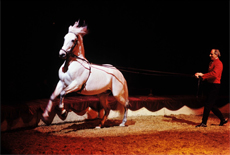 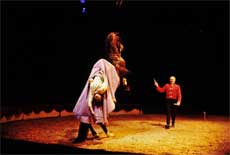 The second phase consists of putting the horse in a position that tests its good position and lightness, then gradually learning coordinated movements, experimenting with several gaits, half passes, medium trot, extended trot, while the rider checks with a sure tactful touch how the animal receives the aids, tongue clicking, bridle, false reins, very soft flexible stick or riding crop, etc. The haute école instruction induces a reinforcement of the equilibrium of the horse, a work on its back to grow it, the gathering of all its forces towards its centre of gravity to allow the rider to channel them and to distribute them according to the combinations of figures envisaged. The horse's thrust, essential to the action, is given free rein and encouraged. In the track it is restricted, it is necessary to send the horse back outside or in a quarry. Small strokes of the rod and rewards punctuate the lessons. 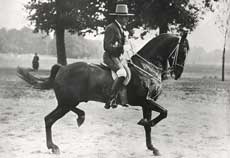 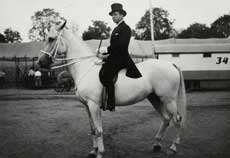 From east to west, different forms of horse riding and therefore different forms of haute école work are emerging according to culture: the Portuguese school, the Viennese school, the German equitation, the Italian one, close to the French equitation which drew its first teachings from it in the Renaissance period. Around the repertoire of airs on the ground, passages, moving on both tracks, piaffe with foot changes at different times, Spanish steps and raised airs, courbette, croupade, levade, ballottade, capriole, the haute école exercises presentations are enriched with creations. Some figures are performed with two horses in tandem, led to the long reins by a mounted rider or on foot. The Rancy family created the pas de deux of La Danseuse et le cheval, soon presented by Dany Renz on Kismet and Catherine Manetti, André Rancy and Michèle Marconi, Yves Bienaimé on Largo and Fabienne Lagrange, then his daughter Sophie. The school riders Sabine Rancy, Cilly Feindt, Edith Schickler, Manuela Beloo, Yasmine Smart or Carmelita Miazano ride sidesaddle or astride, in dresses or trousers. In the four corners of the world, sharing the same passion, children of the great dynasties, the Tourniaire, the Gautier, the Loyal, the Houcke, the Grüss, the Hengler, the Schumann, the Konyot, the Togni or passing riders meet and interact with each other through the combination of influences and meetings, sharing a common language and everywhere the same 13-metre ring, which encourages the horses' adaptation and instils confidence in them. 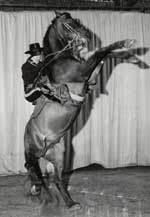 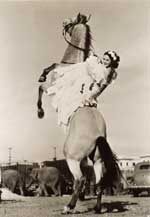 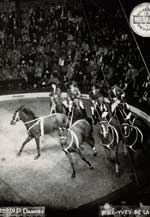