The category of trained and skilful performing animals is the result of an elimination process: animals closest to humans are considered as such, both in terms of geographical proximity and learning abilities. 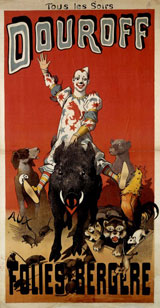 In the 19th century, the "trained and skilful 'savant-like'" connotation refers to animals that are familiar to us or symbolically dependent on humans: donkeys, horses and ponies, dogs, cats, geese, pigs and goats, but also ravens and parrots, not to mention monkeys, from the macaque to the chimpanzee. These animals, often smarter than other representatives of the animal kingdom, animate the ring until the emergence of an expanding exoticism and the recurrent intrusion of the wild animals that began in the late 19th century.
The "trained and skilful 'savant-like'" description suggests a certain level of "education", the possibility for animals with singular faculties to reach high levels of comprehension and thus to be able to perform exceptional "tricks". Where the majesty of the tiger and the power of the elephant are almost enough to make sense, it is agility, finesse and a certain form of virtuosity that will characterize the trained and skilful 'savant-like' animals.
Goats, donkeys and, more rarely, sheep, cows or bulls, will constitute an offbeat substitute for exotic creatures, but their presence will also contribute to the subtle effect of bringing the public closer together, whether urban or rural, but obviously for different reasons. These seemingly banal animals are part of everyday life for many spectators, but their abilities make them extraordinary in the eyes of everyone.
'Savant-like' animals have often been the partners of the clowns: the Russian dynasty of the Dourovs has thus largely exploited this familiar avenue by presenting in the ring, as part of a very simple scenery in the background, an unprecedented assortment of animals. Rats, geese, cats and dogs, all playing a fictional character, in turn travellers, station manager or mechanic of a small steam train, an entertaining metaphor for the trials and tribulations of everyday life. 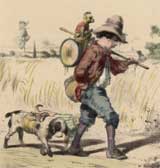 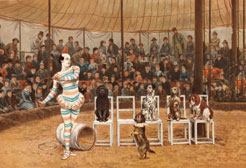 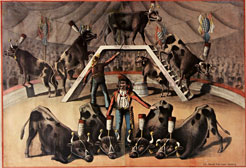