The circus and the press

The 20th century saw the emergence of an unexpected publishing phenomenon implicitly linked to the founding of amateur associations based on the model of fan clubs in the English-speaking world. These groups of enthusiasts – accustomed to meeting around the ring to watch a show, but also to gathering and exchanging opinions and information – were the ideal breeding ground for the creation of newsletters, reviews and magazines distributed in a small number of copies and often summarily printed. 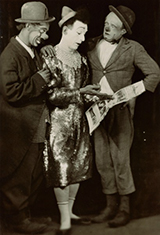 The great ancestor of these groups, connecting members of the same community but with a decidedly official nature, was the Soviet magazine Circus and Stage – Цирк и Эстрада. Published by a state structure, it was aimed at linking both all those who worked for the central organisation of the Soviet State Circus and, more broadly, all those sensitive to the development of circus arts around the world. Circus and Stage took an interest in music hall and variety, as well as magic and, of course, the arts of the ring. The themes tackled were highly varied and offer a fascinating overview to help understand the evolution of the circus over time and throughout history. Circus and Stage was published for several decades and the illustrated covers of the various issues underwent regular graphic changes until the use of photography. These small, summarily bound booklets are part of a long line of highly specialised publications, accessible only by subscription.
Scènes et Pistes (1954-1987), a magazine with a corporate flavour, combined chronicles, classified ads and advertising inserts to offer its readers a real inter-professional link. The author, Paul Adrian, provided a great many articles and countless anecdotes about the world of the circus, thus contributing to the fame of the magazine, just as he did by writing for the German magazine Organ Show Business. These publications were similar to the monthly Circus Zeitung, the review In Cammino, published by the Vatican services, Circo, published by the Ente Nazionale Circhi, and L’Interforain, a corporate body highly focused on the world of fairs and festivals, which regularly granted space in its columns to the circus arts.
As a counterpoint to these “tools” intended primarily for the professional sector, amateur clubs and associations strengthened links between their members, sometimes distant from one another, through bulletins of varying regularity that were a combination of looking back at the past and topical stories. Scholarly publications, Les Cahiers du Cirque produced between 1957 and 1959 by the historian Tristan Rémy, were published in limited print runs: produced individually, with vignettes glued in, they were simply mimeographed and stapled together. These Cahiers were intended for a small number of insiders, keen to enrich their libraries and discover research themes tackled rarely, if at all. The volume dedicated to 40 ex libris of artists, authors or collectors is a veritable mine of original information in this respect. 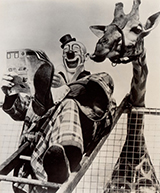 Aimed at a broader audience, magazines such as King Pole, Bandwagon, White Tops and Le Cirque dans l’Univers  published by the journalist Henry Thétard in England, the United States and France respectively from the late 1940s, focused primarily on feature articles and echoes, news and rumours about a form of entertainment that had now become universal.. These “historical” publications would be followed by a handful of others with sometimes very different tones. The beautiful review IMaginifico, published by the Italian publisher Giancarlo Pretini, gave pride of place to illustrations and historical texts, while Planet Circus asserted itself more as an overview of current productions. Cirque, created by the Swiss publisher Frédéric Bollmann Cirkulära Notiser, Manege, De Piste ou Bretagne Circus were, with varying degrees of efficiency, links between the members of the Swedish, Swiss, Dutch and French associations that published them. These magazines, mostly quarterly, tended more to reflect the states of a rather traditional form of the circus, whose developments they supported and commented on.
Long considered a whole and indivisible entity, the circus became widely divided in the early 1970s and new reviews came into existence to accompany and comment on these aesthetic changes. Spectacle, ffounded in the United by Ernest Albrecht, Culture Clown, published since 2000 by the Centre de Recherche sur le Clown Contemporain, Juggle, published between 1988 and 2011, Kaskade, published until 2013, CIRQ en Capitale, published by the Espace Catastrophe in Brussels, Circus Magazine published by Circuscentrum also in Belgium, El Ambidextro  and Juggling, two Iberian magazines with a focus on juggling, and Zirkolika, take an interest in all forms of the circus in Europe and around the world. Most current magazines dedicated to the contemporary circus are gathered under the umbrella of the virtual platform INCAM, International Network of Circus Arts Magazines.
The two issues of the magazine Les Saisons du Cirque, the short-lived Parade, large format on beautiful paper published by the French community in Belgium, the remarkable institutional review Arts de la Piste, published between 1995 and 2005 by the para-ministerial association Hors Les Murs, and the Le Magazine du Cirque et de l’Illusion, which folded after a few years of publication, clearly attest to a regular desire to report on a world that is constantly changing, even if virtual media such as Sideshow and Circus Now, currently have more reason to exist due to their flexibility of use and ability to be easily updated.