The Big Top and travelling circus 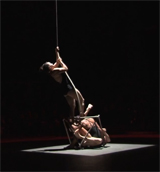 The spectacle des Colporteurs (2013) is interesting for three reasons. First of all, the theme of the show, whose title makes an enlightening, if uncertain reference: the Byzantine Greek word Atsinganos (Ατσίγγανος), means he who is untouchable1. He who is placed outside of any social class. The synopsis, inspired by Beckett's The Lost Ones, conveys meaning through the means of sharp language, creating links that unite men and women, young and old, the fragile and the agile, speaking naturally, softly and harshly, and always with humour, of vulnerability resilience, rebirth and transmission. The show, which begins with a sequence of provoked ejections by a centrifugal force applied to a circular parade of individuals extracted from bin liners, ends with a centripetal ball in the ring. The scenography of apparatus, wire, trapeze, Chinese poles, andrope, use minimalism to trace the cylinder of a centrifuge that evokes Weininger's spherical theatre. Next, there is a project for a camp that surrounds the big top, with a second big top and the company's caravans, which would fulfil their desire to set up for a month in the city centre – as they did in Nantes – blending in with the city walls. Finally, establishing the aim of the project as long-term travel and moderate nomadism through ecological measures and social mediation: taking the time to experience, meet and exchange with others. For this show, the Colporteurs therefore added a small welcome tent, the Boby Bar, to their big top, which was also built by HMMH2, a company known for its numerous creations in this domain. 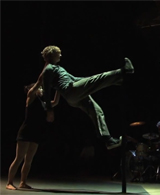 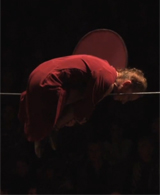 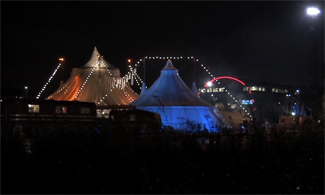 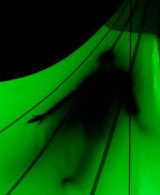 Created in Nantes in 2011, this "piece for a big top" by Aurélien Bory was performed on tour until 2013. The word "hybrid" was rapidly used to describe his work; Telerama magazine presented it as "the inventor of a conceptual hybrid circus." He himself refers to "a hybrid of practices that have a field of convergence."

Each creation is therefore established in an encounter with another context: that of an artist, a place, a practice or a milieu. In each case, the procedure is the same: "it is by moving things that they can be brought to the edge, and to a place of questioning." Even though this theatre is "crossed by several disciplines, circus, dance, the visual arts and music," it is clear to Bory that what he creates is theatre: "Our theatre approaches the stage as a physical space and establishes physical actions there," constituting a physical theatre. 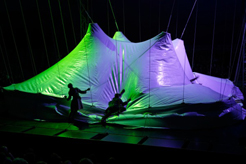 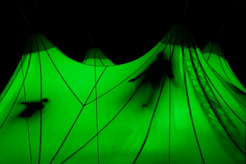 In Géométrie de caoutchouc, the container (a square-plan four mast big top) that welcomes the artists and audiences becomes the content (on stage, a small tent, a replica of the big one, manipulated by wires, is the veritable protagonist of the show), in a mise-en-abyme that touches both the origins of the theatre and the stage as a canvas stall, the question of the complete and the void, of appearance and disappearance, and of attempt and failure. Operated in a quadruple-front rapport by eight actors (four impeccable couples dressed in off-white raincoats) who seize hold of it, this odorous plastic structure only stays in place thanks to the tension of its hoists. Soft theatrical machinery that can be easily transformed, it is the hero of a tale in which the audience alone decides on the ultimate meaning of this faceted performance. The actors arise from this stomach, then endlessly climb the canvas that stretches up like a mountain, slackens and then tenses again. Here, the use of the big top is intrinsically linked to the nature of the creation and its temporality: the big top is first of all a specific setting for a show. By the way, it is worth pointing out that the constructor, the Italian company Ortona Tensostrutture, is an "industrial" supplier of traditional circuses. This approach is comparable to the choice of a veritable industrial robot for the show Sans objet. 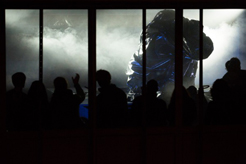 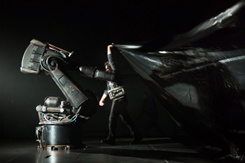 The Cirque-Théâtre d’Elbeuf is the latest circus-theatre model in France. Johann Le Guillerm was its sponsor from 2007 to 2015. In 2013 he was programmed in two spaces. In the permanent circus, he presented the Monstration installation. In the big top, in the fairground field connected to the Cirque-Théâtre, he performed Secret, created in December 2003. He declared that he was not creating any new shows, but continuing that which he had begun, presenting work on the profession since the creation of the company in 1994. In its original form and in its January 2012 mutation, Secret, along with Monstration, which has evolved towards an installation that no longer goes by that name, currently composed of Imaginographes (observation tools), Imperceptibles, La Motte (moving sculptures), Architextures (self-carrying sculptures), as well as the Observatoire (laboratory), are all part of his great work Attraction, a mutating polyptych that questions balance, form, point of view, movement and impermanence, between art and science. It was therefore striking to move from La Motte, a sequence in Monstration in the ring of the permanent circus, to Architextures, which transformed the bi-frontal playground in the ring of the canvas circus. The big top is indifferent and banal, but the bi-frontal scenography is less so. The circle is crossed by a long processionary path, displaying the materials favourable to the physical and mental constructions that form the dramatic art of the show. What is interesting about this, is the aim to play topologically as much with the stable space as the mobile space, in a truly complimentary way. 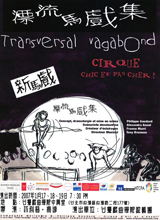 Created in 1974, the Compagnie Maripaule B. - Philippe Goudard, Cirque d'Art et d'Essai led a creative approach that has always linked the artistic question of the circus form to the question of place and infrastructure. Marie-Paule B. and Philippe Goudard, working with the stage designer Gilles Lambert (trained at the TNS), generated numerous temporary circus architectures.

The project led by Philippe Goudard, Transversal Vagabond, cirque chic et pas cher (2006-2007), goes in the opposite direction, by defining itself as a work of art crossing several paths, reducing itself to a strict minimum, choosing to wander "with neither hearth nor home." It was the path that defined a non-industrial circus concept that was ultra-light and mobile, and adaptable to every culture in the world; it was the path of collaboration between artists, technicians, and researchers of different nationalities, going to meet each other and the audiences in their countries; it was the path of writing and creating a composite show. And so the circus came back to its origins: travelling and adaptability, feats, acts, the body and its three main disciplines: acrobatics, object manipulation and clowning. For Philippe Goudard this project constituted a process, and a political and economic stance based on aesthetic choices: he did not use his own space, but acted as a cuckoo making its nest, or a hermit crab. 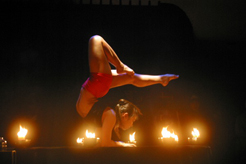 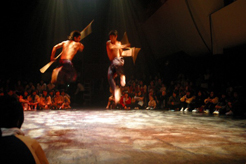 In 2013 in Aurillac, Nigloo and Branlotin and their Petit Théâtre Baraque joined Titoune and Bonaventure, from the Cirque Trottola, for Matamore, performed in a pit, barrel and cylinder setting beneath a big top, digging out an arena as though it was an anatomical theatre. We should also mention the new permanent circuses in Auch and Calais. In this way, long-term travel and moderate nomadism, the physical theatre where the secret laws of nature are performed, artistic wandering on a quest for an invigorating spring, and the human architecture of expression, all form an existential structure that generates, depending on need and opportunity, a shelter or building, whether temporary or permanent, traveling or stable, indispensable to its appearance, forming the always renewed figures of the ring, of the street arts, and the performing arts, in a perspective of solidarity. It is striking that the way of describing the performing arts, according to the sacred formula, stems from the place used: ring, stage, street are all terms with rich semantics, which should be correlated. 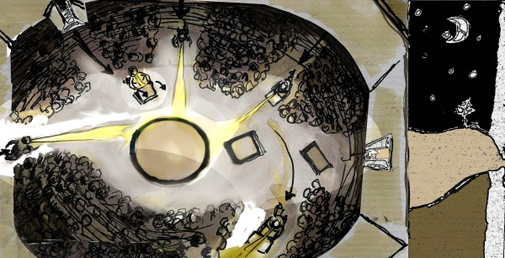 1. "Tsiganes or Tziganes" is a term that appeared in the French language in the early 19th century, probably a calque on the Russian tsigan, which could come via the ancient Russian and Bulgarian, from the Byzantine Greek Atsinganos, which was the popular pronunciation of Athinganos: "who does not touch" or "who does not want to be touched," literally, the "untouchables."

2. In the profession since 1971, Napo, a designer creator and user of structures for such varied areas as the circus, new circus, theatre and events, went into partnership with his brother Hubert Masse creating, in 2000, the HMMH company, which constructs numerous big tops for artists.