Twilight of the Gods

The death, on 20 June 2017, of Christel Sembach-Krone (1936–2017), the last heiress of a dynasty founded in the 19th century, profoundly signalled the end of a world forged in the fury of the First World War and now beset by a weakening of its roots.

A product of the world of fairground menageries, Carl Krone (1870–1943) grasped the inevitable demise of this unique form of show very early on and took advantage of the triumph of the tour by the American giant Barnum & Bailey to turn his back on the foundation on which he had made his fortune and create his own circus in 1905. Within a few years, the company had earned its stripes as a European “colossus”. Despite temporarily giving in to the mirage of the three-ring circus, Carl Krone quickly learned the lessons of the giant circuses across the Atlantic to shape and put his own stamp on the ingredients of a carefully controlled excess that became, as the seasons passed, the biggest circus on the old continent.
Carl Krone married Ida Ahlers (1889–1957), a tamer by profession, but above all someone seen as a protective mother for all the residents who lived in the huge travelling menagerie’s cages. In 1934, 850 mammals, birds and reptiles made up a collection on a par with that of many zoos. Henry Thétard painted a pretty portrait of Ida Ahlers, full of tenderness and admiration, in his book Coulisses et secrets du cirque published in 1947. Carl and Ida would have a daughter, Frieda (1915–1995), who also had a close bond with animals: married to the animal trainer Carl Sembach, she elegantly performed with the herd of elephants and ran the huge circus faultlessly after the death of her husband. They had two children, Otto and Christel. 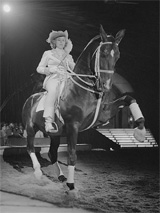 Trained by remarkable experts in the equestrian arts, Christel Sembach-Krone first appeared in public at the age of ten. A haute-école horsewoman, she perfectly mastered working with long reins and the essential components of the classical repertoire. From 1968, she replaced her father at the head of the large equestrian displays on which the circus’s reputation was founded. Its stables were home to dozens of horses, of different breeds and coats, often from prestigious bloodlines. Head of the company since the death of her mother, C. Sembach-Krone confidently managed the travelling city that surrounded the 5,000-seater touring big top, as well as the infrastructure of the Kronebau (permanent circus building) in Munich, where three different shows were put on between January and March.
With hindsight, it would probably not be wrong to think of the Krone circus as “women’s business”: Ida, Frieda, Christel took the helm of a colossal enterprise, braving storms, overcoming crises and remaining committed to keeping alive the DNA of a circus rich in fairground history, but always with an eye on modernity. Christel Sembach-Krone had long reigned over the riding school and the elephants, loyal to an age-old rule that these animals were traditionally presented by the director of the circus, in this case a woman.
The story of Circus Krone continues under the leadership of Jana Mandana, a horsewoman and trainer, and her husband, the animal trainer Martin Lacey. Elephants, wild animals and horses still provide a large part of the show, now fragile heirs to a glorious past.