The birth of the Auguste

The debate fascinates circus researchers and historians: who is the first Auguste? This heir to the Greek, Osque and Latin buffoons, half Maccus and half Bucco, half Pulcinella and half Pantalone, appeared on a ring at the end of the 19th century. They say it was at Renz's. The sources are vague.

Yet there is one, precious, rare, explicit source. In a book dedicated to the 50th anniversary of the Renz circus1, founded in 1846 in Berlin, the journalist Alwill Raeder talks to Ernst Renz and his entourage. He compiles and annotates the paper programmes and places the most significant events of the circus seasons on a chronological grid. Thus, on the 3rd of November 1874, a simple little sentence indicates: "Auguste" by a thirty-year-old squire. This is the first appearance of this new comic figure. He announces his arrival with a loud sneeze that bursts out just when the orchestra stops playing. In black clothes, lit by a tie and a white vest that is too big for him, his sagging pants wriggling down onto his shoes, Tom Belling stands tall in the mounting block. He is as relaxed as his costume. The accomplished and elegant squire shows a grotesque clumsiness, and laughter breaks out.

Tom Belling is the son of a British riding school master, Frederic Belling, who studied as a squire with Jacques Tourniaire or the Franconi before leaving for America where he created the Fred Belling Hippodrome. Born in Philadelphia on the 24th of April 1843, Tom trained in horseback riding and acrobatics. He participates in pantomimes and various entertainments with the clowns of the troupe, the Lee brothers, the Gatley, the Mariani or William Kemp. However, the director entrusted him with this new role, which replaced Popanz bonhomme, the Berlin partner of the men who provided the barrier. Alwill Raeder explains: "Tom (...) shows an astonishing versatility, which finds its peak in the creation of the famous character, that of a clumsy head groom named Aujust.2"

Tom Belling appeared in 1877 on the Summer and Winter Circus program alongside Océana Renz, Anna Fillis, John O'Brien and the clown Chadwick, all from the Ernst Renz circus. But he did not enjoy the same level of esteem in Paris as in the German circus and for "Môssieur Auguste" to really win over the Parisian public, we had to wait until the English James Guion joined the Cirque d'Été in 1880. The clumsy character that the public at the Hippodrome renamed Gugusse adopted the silhouette of Dummer August in black clothing with a white vest, crowned by a ridiculous shortcut to the clown's toupee wig at the beginning of the century, the pointed spiky hair of the "dandy", covered by Adolf Olchansky, Kesten, Foottit, Sestac, Luigi and Paolo Fratellini or Gregorio del Busto.
Over time, the Auguste changed his silhouette, but he did not disappear, even after a press release in the European press on the 10th of March 1900: "We learned from Berlin of the death of the clown Tom Belling, universally known as Auguste". He was responsible for creating this fun and popular figure in circus audiences around the world. Tom Belling was fifty-eight years old." 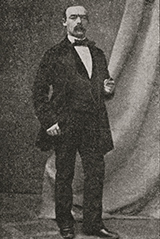 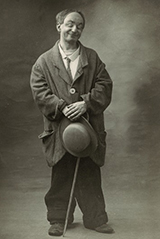 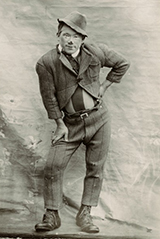 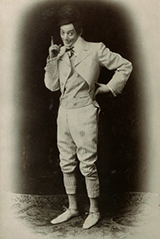