Social intervention clowns appeared at the end of the 20th century as a modern resurgence of a variety of comic, offbeat characters who regularly occupied a special place in human societies, in a setting that was neither the circus ring, nor even the stage.

This is the same position occupied by social intervention clowns whose short passages punctuate conferences, seminars and other professional meetings. The entertainer function of the "social intervention clown" is the appearance of a hidden function: to play with the challenges and contradictions present in a social situation. Issues concerning human values, suffering at work, conflicts, profitability... From the edge, the clown bursts into the normal course of social life. This temporary break opens up a potential space for seeing, living and imagining the world differently. In this spirit, after the 1980s, clown actors invested new territories and met new audiences.

Since 1981, the "clownanalysts" of The Bataclown1 have been involved in scientific conferences, congresses of social organisations, company seminars and professional meetings. They become the reference for the intervention of clowns in the associative life, the civic debate, the professional training process but also in the field of political, economic and social power.

The Bataclown company, created in Toulouse by Anne-Marie Bernard, actress, Jean-Bernard Bonange, pedagogue and specialist in body expression, and Bertil Sylvander, sociologist and musician, was the first to introduce, in 1981, the character of the Auguste in professional meetings, creating the name "clownanalyse" to designate their social intervention practice. Associated with Bernard Mangin - Alberto - they created the "Société Française de Clownanalyse"2. In addition to their skills as improvising clowns, coming from different and complementary professional backgrounds, clown analysts work in a wide variety of institutions, with a number of participants ranging from a dozen to several thousand. 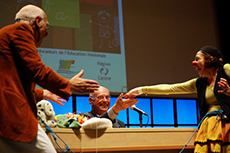 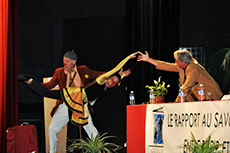 Techniques specific to the clown in the professional environment complement those common to intervention clowns in other environments, such as in the care or humanitarian field. In clown analysis-type practices, the intervening actors are present in the meeting room as simple participants. They observe, listen, take notes, then retire backstage, to metamorphose into Augustes. They choose objects as if they were props before reappearing in the room to improvise a scene that reflects the situation. They can intervene several times during the same meeting, thus becoming a common thread for the participants.
The impact of the clowns' intervention lies in the strength of their performance in relation to the specific issues that affect the institution. Clown actors must know how to collect relevant information on the social situation and on the people in charge, forge links with the social actors, observe their practices, identify the underlying issues and what is left unsaid, and then put it into their improvised live performances. 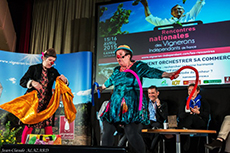 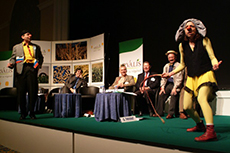 The Bataclown has developed a specific pedagogy aimed at developing the necessary skills to intervene through improvisation in social situations. The creative act of improvisation requires the intervening clown to combine a dual anchor in the same piece of play:

- The reference work that anchors improvisation in the concrete social situation encountered: the arrangement of space and material, social functions and relationships, the postures and words of those present, the information gathered, and the issues identified.... This anchoring allows the clown to be in touch with the situation, in contact with people and to be relevant.
- The reflective work that places improvisation in the context of the social situation encountered and in the clown's own empathic emotion: the potential for life, emotion and dream that he brings to life in and around him as a clown. This anchoring corresponds to an opening on the imaginary register of the song or tale, of the comic strip or the animated cartoon.

The dramatisation of reality

In their improvisations, the actors create a representation of the issues and challenges in a fictional form, by taking on the roles of characters who refer to the concrete situation and by constructing the scenes in a dramaturgical way. These roles are addressed in a clownish way (emotion, naivety, nonsense, reversals, ruptures and " interplay in the play "). They use various techniques: direct illustration of reality, transposition or identification - for example, a virus will be played by a clown. 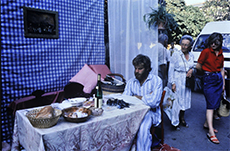 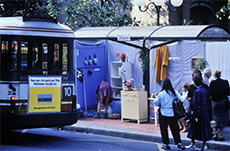 The art of clowns in social situations will be that their interventions have a power of both evocation and institutional transformation for the people concerned. The social intervention of clowns is therefore an artistic practice that is adjusted and transgressive, relevant and impertinent, in relation to a specific professional context. The clown holds out a mirror that provokes the spectator and invites him, through the medium of laughter, to reflect on change. In the theatrical action, the reality and myth of the group gathered but also its potential for evolution are condensed and made visible through images.

In France, about thirty clown companies have joined forces within the Fédération Optimiste du Clown d'Utilité Sociale (FOCUS-Acteurs-clowns), at the initiative of the Bataclown and the Centre de Recherche sur le Clown Contemporain, publisher of the magazine Culture clown.