Part of the repertoire of the great illusion is based on the principles of the apparition and disappearance of persons, objects or animals. These two categories of effects, always impressive, are part of the mystery that envelops and conditions the magical practice. Suddenly filling an empty space or making any volume disappear in a few seconds continues to fascinate those who witness it. The Roman apotheosis, spectacular apparitions of divine figures in all their power and glory, prefigure the discoveries of the Master of Secrets of medieval theatre, a shadow magician who amplifies the brilliance of the performances through the use of surprisingly ingenious scenic devices. 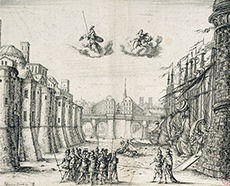 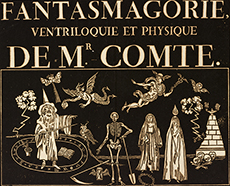 On the 20th of January 1798, a few lines announce a "phantasmagoria" of someone named Robertson, whose real name is Etienne-Gaspard Robert: "Apparition of Spectres, Ghosts and Revenants, as they must and could appear in all times, in all places and among all peoples. Experiments on the new fluid known as galvanism, the application of which gives movement back for a time to bodies that have lost their lives. An artist distinguished by his talents will touch the harmonica. We endorse the first session which will take place on Tuesday, 4 pluviôse, at the Pavillon de l'Échiquier. " [E.-G. Robert, Mémoires récréatifs, scientifiques et anecdotiques, 1831-1833]

This show, which revisits the macabre dances of the 13th century, will provoke a lasting craze for spectres. Miracles, thaumaturgy and references to the Devil will contribute to very effectively nurture the fascination for the supernatural throughout the nineteenth century. A dimension that magicians like the Davenport Brothers will largely exploit from 1864 onwards and that Etienne Saglio magnifies in turn in 2016 in his show Les Limbes.

Robertson uses the principle of the magic lantern, a projection device revealed since the 16th century by the translation of the treatise of a 10th century Arab scholar, Ibn Al-Haytam. Giambattista della Porta, an Italian scholar particularly interested in optical effects, published a book for the general public in 1558, Magia Naturalis, in which he described a phenomenon of apparition similar to the result of later experiments. The ghost effect or phantasmagoria was explored by Robertson at the end of the 18th century. John Henry Pepper and Henry Dirks invented a new optical process in the 1860s to make a ghost appear on stage. Called Pepper's Ghost, it was first used in London in 1862 for a Christmas Eve performance of Charles Dickens' The Haunted Man. The success of this illusion is dazzling, and all the theatres want to adopt the system developed by John Henry Pepper, which leads to debates on the patent of the invention. In the 19th century, like the Théâtre du Châtelet, since 1863, permanent theatres or fairground theatres have regularly created "fairy tales" where elements of the magical repertoire are integrated, and in particular the apparitions and disappearances of people or objects, which the contemporary company Cie 14-20 develops through staged productions in several of its creations. 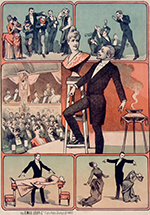 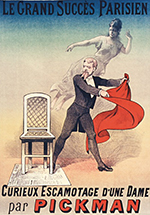 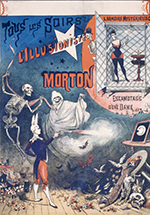 Considered the father of modern magic, the Frenchman Robert-Houdin was not only on the lookout for the technical innovations of his time, but he himself developed genuine scientific inventions1 that were significant for his time. His knowledge and inventions, particularly his mechanical inventions, were used to design and build several of his tricks, thus pushing back the initial limits of illusion. He opened his own theatre on the 3rd of July 1845, at 11 rue de Valois in Paris. It is a singular place where trapdoors and backdoors, especially between the stage and the auditorium, contribute to the simplicity and lightness of apparitions as well as disappearances. Everything contributes to immerse the spectator in a singular atmosphere where the floor, ceiling, walls and, of course, all the personnel involved in the reception and the execution of the effects and the tricks, are able to manipulate the imagination and the mind of the audience. After a move in 1854 to 8 boulevard des Italiens and several successive management teams Georges Méliès became its owner - the last one - in 1888. It was there that he shot Escamotage d’une dame au théâtre Robert-Houdin ("Retraction of a Lady at the House of Robert-Houdin") in 1896, the first film in the history of cinema, particularly in Europe, to use a special effect. Méliès multiplies the comings and goings between cinema and illusion to fascinate his spectators even more. Popular during the 1940s through the 1960s in the United States, the Spook Shows, composed of macabre attractions, are part of this lineage of magic effects as a counterpoint to a projection. A dimension relayed by William Castel, director and producer of rudimentary fantasy films for which he offered a selected network of cinemas some "special" effects to densify the screenings: electric shocks in the seats or fluorescent spectres flights above the spectators… 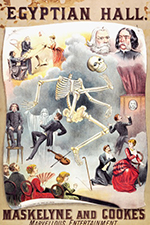 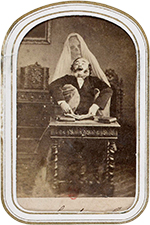 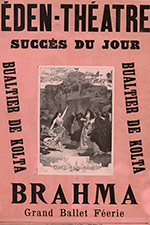 Robert-Houdin enhances a romantic vision of science while playing on the evocative power of magic effects. One of his heirs, Buatier de Kolta, born in Caluire-et-Cuire, who died in New Orleans and was buried in London, is the creator of several tricks that have since become legendary: La cage éclipsée ("The Vanishing Birdcage") (1873), La disparition à la chaise ("Vanishing Lady - De Kolta Chair") (1883) and Le dé grossissant ("The Growing Dice") (1902). This last trick, which has kept its mystery2, involves a black dice with white dots about fifteen centimetres wide, taken out of a small suitcase and placed on a coffee table. The collective memory remembers that it grows in everyone's eyes until it reaches about eighty centimetres to the side and that, lifted by the magician, he discovers Mrs. de Kolta sitting cross-legged.

Magicians soon began using live animals to carry out some of their tricks: Robert-Houdin notably sprung objects and animals from his Carton fantastique ("Houdin Portfolio"), thus mixing with the illusion of very real creatures. The integration of exotic animals changes the perception of the great illusion and drastically transforms the technical and artistic vocabulary of many practitioners. Some magicians have a real menagerie, such as Carmo or Carter, who travel with wild animals, birds and... an elephant! This new dimension, linked to the possibility of acquiring any species through specialised merchants mainly based in Europe or America, is decisive for the development of big show magic. The substitution of a young woman who disappears into a small cage for a panther, tiger or lion has been a classic attraction since the late 19th century.

The designers of the New Moscow Circus, a revolutionary building inaugurated in 1971, understood this well by integrating a new system for transforming the ring. In less than a minute, an ice surface can disappear and give way to a floor that is perfectly neutral in appearance, but which is actually "rigged" with traps of different sizes to allow partners or animals to appear or disappear at will. Members of the Kio dynasty who performed in this establishment made extensive use of this invisible equipment to create truly spectacular performances that could constitute the entire second part of a show. 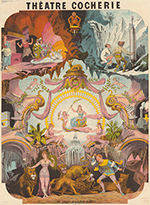 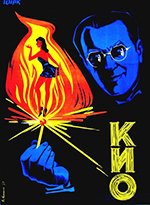 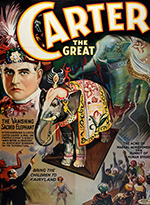 The technical process of apparition is gradually refined and enables illusionists to diversify their presentations. By bringing out pink flamingos with thick feather boas of the same colour, Siegfried and Roy create a subtle and spectacular distortion effect and play with humour on the intuitive link between the bird and its plumage. The various shows created in Las Vegas by the two magicians focus on working with animals of all kinds, tigers and white lions, horses and elephants. Produced by Irvin and Kenneth Feld, Siegfried and Roy multiplied the effects by inserting them into spectacular shows where effects, animals and dancers helped to make Beyond Belief - Incroyable! in French - one of the most profitable creations in Las Vegas from 1981 onwards.

Since the 19th century, the great illusion has been offered in several configurations, each imposing both constraints or technical simplifications. Performing in a circus ring leads to different effects than on a classical theatre stage, let alone a stage specially designed for the creation of a particular show. Jean-Eugène Robert-Houdin, a pioneer and precursor, had understood this well by designing his theatre to suit his tricks.