Manipulating three objects of the same nature with virtuosity as if it was supernatural, totally professional, is barely a century old! What if these objects are plastic clubs barely 50 years old! Yet juggling is at least 4000 years old. The history of juggling, or rather its archaeology and genealogy, which have yet to be largely established, force us to abandon the current and conventional image that we have of it. 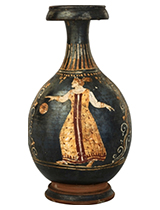 The historical thread that we are running here is based on the hypothesis of a continuous transformation of a relatively stable skill: throwing objects with virtuosity. But other, anti-chronological ways would be possible.
Why has the human being started to juggle? To avoid boredom? Out of curiosity? To hunt, to intimidate an enemy? The Chinese Yiliao is said to have juggled with nine balls on the battlefield to scare off the opposing army. Or was it first a religious ritual, as Alvarez1 suggests at the beginning of his book La jonglerie : son histoire et ses meilleurs interprètes ("Juggling - its history and greatest performers") : "When the primitive man engaged in religious rites, he began by showing his skills, singing rudimentary songs, clapping his hands, and clapping sticks against one another. " Unless man simply tried to make his life easier, more joyful - just like we throw our keys in the air for no reason after closing the door.

An activity that goes back thousands of years 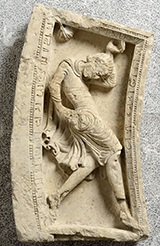 The oldest known trace of juggling is a mural painting, decorating the fifteenth tomb of the princely necropolis of Beni Hasan in Egypt. Two women hold out their hands, a round object in each hand, a third floating in the air above them. Another woman is in a similar position, but with her arms crossed in front of her chest. Egyptologists note that women's hair is styled in a formal style, which could indicate that the scene is part of a kind of ceremony. If we do not know the name or function of the activity, at least here we have proof of the existence of juggling around 2000 BCE. The following documents (statuettes, paintings on ceramics, frescoes) date from ancient Greece - about 500 years before our era -, Etruria and Rome. There is every reason to believe that expert ball handling was very popular, but we are not familiar with its social function.
Between 500 and 1100 CE, troubadours from Normandy began to form small travelling show troupes. They play music, sing, dance, tell stories, present magic tricks or trained animals and sometimes also some acts that would be called juggling today. The word "juggling" then refers to all or any of these activities, and generally means "entertainment". From the Renaissance to about the middle of the 19th century, the word "juggler" was mainly used as a synonym for scammer, charlatan2, or even "sorcerer". 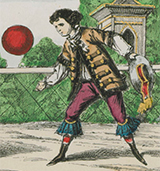 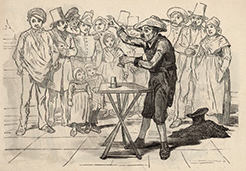 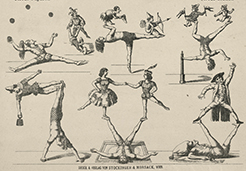 The circus leads to the professionalisation of jugglers 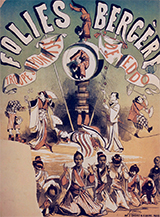 The birth of the modern circus in 1768 marked a crucial stage in the history of juggling. For the first time, the different skills of the artists are clearly separated: equestrian vaulting, rope dancing, etc. Initially complementing the equestrian exercises, juggling is gradually becoming more autonomous. A large number of tricks were created with the advent of variety in London with the opening of Canterbury Hall in 1852 by Charles Morton, who integrated various artistic expressions into the music hall program.
The arrival in Europe, in 1810, of groups of Asian artists will precipitate this movement. The first ones come from India, do magic tricks, charm snakes but also practice juggling: twirling rings around limbs, throwing objects, handling metal balls and devil sticks. They were soon followed by the Chinese and Burmese. The Japanese arrived in 1867, at the end of the Edo period, with completely new juggling techniques. Their style, and most often also their costume, will be widely imitated by European jugglers. 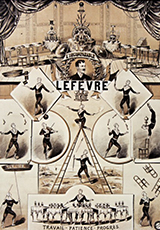 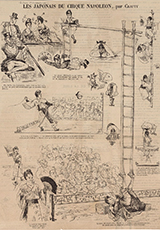 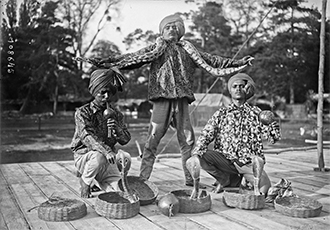 The era of great professional jugglers 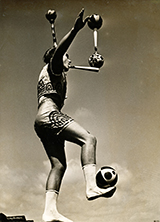 What these oriental artists and their imitators do is a combination of magic and juggling, which are not identified as such. In 1885 the German-British juggler Cinquevalli3 was the first to speak publicly about juggling, and to distinguish it from magic. For him, the spectator had to be able to measure the level of competence required to perform the tricks. To this end, he used everyday, familiar objects and played in street clothes rather than in the exotic costumes that were fashionable at the time. The end of the 19th century also saw the triumph of "restaurant juggling", a true form of silent theatre, featuring, in the setting of a chic restaurant, a large number of performers, juggling with all the objects around.

With Paul Cinquevalli and the jugglers who, following him, developed solo juggling, such as the German Salerno (Adolf Behrend 1868-1946) or the American Kara (Michael Steiner 1867-1939), juggling gained in popularity and autonomy, now naturally becoming a part of variety and circus programmes. In the continuity of Cinquevalli's style but pushing virtuosity to a level that was unimaginable until then, soon emerged a talent that today's jugglers still consider "the greatest juggler of all time": the Italian Enrico Rastelli. (1896-1931). In the 1920s, Rastelli enjoyed immense success in Europe and in the United States - after the clown Grock, he was the best-paid circus artist of his time. Soon " Rastelli juggling " became a new model, widely imitated: while solo jugglers work with heterogeneous everyday objects, new jugglers, such as Americans Bob Ripa (Edvin Hansen 1913-1943), Serge Flash (Serguei Fomitcheff 1904-1956), the Austrian Trixie (Martha Firschke Larue 1920-2001) and the Russian Jenny Jaeger (1909-1986), have, after Rastelli, become used to juggling and breaking records with similar items: balls, plates and sticks. 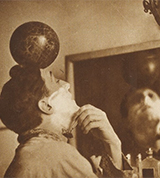 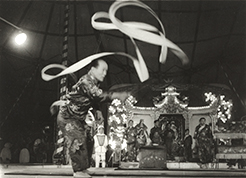 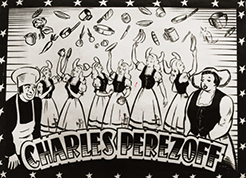 In 1931, the year of Rastelli's tragic death at the age of 34, the artist Bela Kremo had the idea of creating a very economical act. Inspired by Will "Mad Hatter" Cumin. He chose three hats, three cigar boxes, three balls, a bowler hat, a cigar and two gloves rolled into a ball in a ball as accessories. And a chair. His piece links several paintings to music. A new style was born, in which the American juggler Bobby May (Ludwig Theodore Mayer 1907-1981), adept at minimalist juggling, with white balls and clubs, was a major example. At the same time, comedy jugglers such as W. C. Fields (William Claude Dukenfield 1880-1948), Rich (Georgie) Hayes or Albert Rebla (Albert James Stevens 1880-1963) appeared, who, until the 1930s, staged fabulous failures.
The 1940s and 1950s were marked by a new decisive stylistic breakthrough: choreography, introduced by the German juggler - later naturalised as an American - Francis Brunn (1922-2004). After a first period of his career in the Rastelli style, Francis Brunn abandoned this inspiration to create a sober character, a flamenco dancer, completely dressed in black. His technical feats earned him a huge success: two rings rotating around one leg and two others around his arm, he threw a balloon that turned on his finger with one hand while the other hand juggled with three rings, and his head held in balance a pedestal where another balloon, itself in balance, was twirling. But it is above all his work on the movement of the body that appears to us, in retrospect, as a precursor. 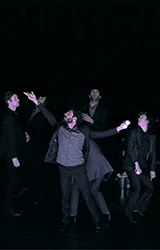 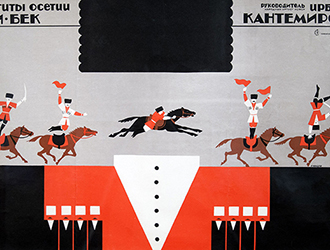 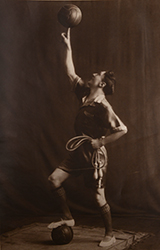 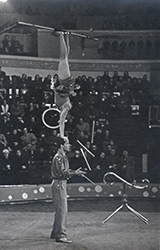 On the 17th of June 1947, at the meeting of the International Brotherhood of Magicians in Pittsburgh, Pennsylvania, eight participating jugglers decided to form their own association, which they called the "International Jugglers Association". From then on, a culture of recreational juggling, as an "amateur", gradually developed in the United States. And with it, a new attitude, open, very different from the attitude between professionals, jealous of their secrets. In juggling conventions, the idea of sharing begins to take hold, and in particular the sharing of accessories. Three standard objects based on Enrico Rastelli's favourite accessories. The batons give way to clubs, the plates to rings, which are " intrinsically geometric " objects, involving three different explorations of throwing-catching: in the case of the ball, the rotation of the object is negligible, in the case of the ring, the rotation on a single axis, and with the club, it is the rotation on the other axis that is important.
But another phenomenon was to have a crucial influence on juggling: the Soviet circus policy. The Revolution of 1917 had seen the exodus of many European circus families. Russia had hundreds of circuses throughout the country, but very few artists. The foundation of the Moscow State Circus School in 1927 aims to solve this problem. Gradually, teaching methods were adopted, strongly inspired by those of gymnastics and classical dance.

In 1962 N. E. Baumann published the first pedagogical juggling manual, in which the juggler was presented in typical ballet positions. Soviet schools also play an important role in the standardisation of the objects used and the dissemination of models. 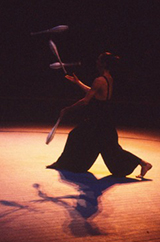 After the Rastelli model, it was the style of Alexander Kiss (1921-1990), which appeared in Russia in the 1940s, that imposed itself on Soviet jugglers in the following years. Serguei Ignatov, a student of Alexander's sister Violetta Kiss, will provide the third model. Having started in 1970, at the age of twenty, he quickly distinguished himself within the Moscow State Circus, notably for his way of handling five rings (before him the work stopped at three rings) and his virtuosity (no one ever exceeded his record of eleven rings in the air).
The development of amateur practice, the search for virtuosity and the stylistic evolutions mentioned above would lead to this major invention: the plastic club. In fact, club juggling, both solo and collective, had appeared in the United States in the 1920s, and club juggling troupes were quick in finding contracts in Europe. But the practice really only becomes more popular with mass production. The juggling clubs were made of wood, heavy and strenuous for hands and body. In the 1960s, Jay Green in Brooklyn, New York, created the first modern club by joining several plastic parts, a cushioned handle and foam knobs. He paved the way for Brian Dubé who, in the 1970s, perfected the model by custom-moulding parts of the juggling clubs. Dubé was himself copied by all the juggling accessory manufacturers.
In the 1980s, a new standard appeared, actually anticipated by Rastelli sixty years earlier: the performance lasting one hour or more. In the United States, it is due in particular to Michael Moschen and Airjazz4, in Europe to L’institut de Jonglage ("The Juggling Institute") and Jérôme Thomas. In this longer format, with a bright future, new aesthetics emerge in the form of costume design, lighting, choreography, acting, dramaturgy. 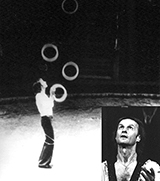 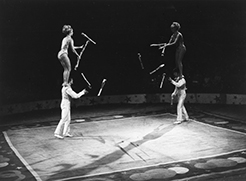 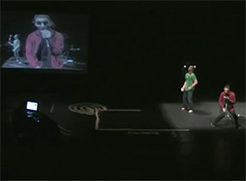