Traditionally associated with the footsteps of man since antiquity, monkeys accompany saltimbanques on their peregrinations and assert themselves as resistant partners, stoic animals who are content with very little. But above all, their ability to learn skilful tricks, always appreciated by the public, contributes to making them valuable in the eyes of their owners. 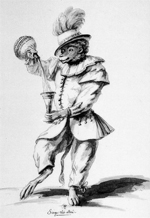 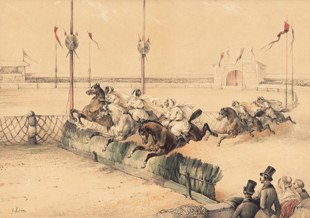 Monkeys, wild creatures that became skilful when man discovered anthropomorphism, belong to a particular category in the catalogue of trained animals, but not all species are equal and few of them are finally adopted by trainers to meet their performance and learning requirements. The first to be trained are macaques and baboons, probably because of their geographical proximity to Europe, but also for their ability to integrate a repertoire of attitudes likely to seduce a readily dazzled audience. 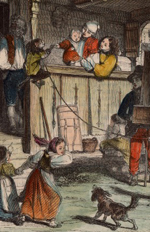 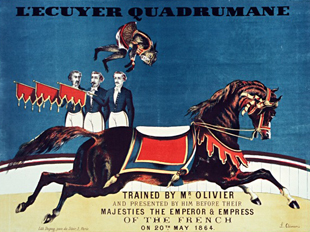 Despite their independent personality, the German Rudiger Probst has succeeded in training a group of hamadryas, these cynocephali dog-headed looking monkeys whose impressively fanged males are endowed with a sumptuous grey mane. Powerful and fast, these animals are part of the register of potentially dangerous animals, without being comparable to wild animals such as tigers or lions, but undoubtedly as dangerous as wild dogs. Other species, from the marmoset to the gibbon, will undergo training, sometimes for a simple role as an extra just like the tiny tamarind on the shoulder of its owner, who is perched on the back of a rhinoceros. Gibbons have been trained, mainly to perform acrobatic figures in relation to their extreme availability for arboreal locomotion. The common ancestor of hominids could have been an arboreal climber, with many physical characteristics retained by humans today, including the flexible joints of the fingers and shoulders, a significant analogy with acrobats. 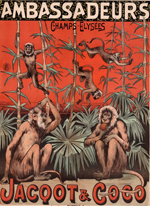 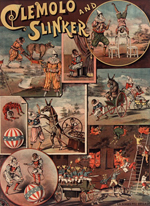 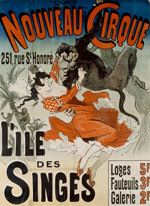 The king monkey for the circus is the chimpanzee, an animal as rational as the dolphin could be, but above all a primate capable of reproducing human gestures and postures with a disturbing simplicity. The most famous of all is Consul, an exceptional beast dressed from head to toe like a man of the world, able to eat at the table, smoke, undress for bed and blow out the candle. This chimpanzee will have several successors, but he remains a remarkable subject in his ability to imitate men, even if it is fair to think that dressing a wild animal in this way is more of a caricature than a tribute to its intelligence.
The strength of an adult chimpanzee is an asset to the trainers who train it in trapeze, flying on high bars or as a hand-to-hand partner. The Rech, Niccolini, Willy Kubler or Fawcett presented their animals throughout Europe, playing on the agility of their residents to compose a singular repertoire directly linked to their intelligence.
The Russian trainer Vladimir Dourov has trained countless animals and has mastered the sometimes-unpredictable behaviour of animals as unexpected as lemurs. But he also trained several chimpanzees, a rare species in Russia at the end of the 19th century. His descendants, still based in the Moscow Animal Theatre, an establishment founded to present shows entirely performed by trained animals, still own chimpanzees that they work with in the style of Consul. 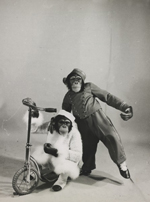 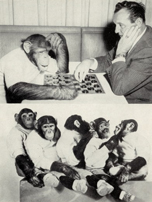 The most impressive primate, the gorilla, is also the one that has been most rarely presented in the ring and even more rarely trained. Yet, in Europe and America, this ape, more powerful than all the others, has been honoured by stunningly titled posters. In the 1960s, the Bouglione brothers had the opportunity to acquire Jacky, an adult male gorilla for their menagerie. The beautifully sized animal is installed in a specially equipped vehicle and displayed with the wild animals, the elephants and the other monkeys owned by the circus. Jacky has never been shown in the ring, but his mere presence on the posters and in the menagerie was enough for several seasons to attract many curious people over to admire him. A few years later, Jean Richard obtained Zazie, an adult female shown in his "glass palace", a glass-walled carriage that would allow the animal to be seen without being obstructed by a series of bars. Circus Knie also owned a couple of these exceptional primates in the 1980s, transported in two adjoining carriages during each stage of the tour to give them more space. All these gorillas have been successful attractions, but the most famous of all, the one that has largely contributed to preserving the world's largest circus from bankruptcy remains Gargantua, an animal acquired by John Ringling North in 1938 and which enjoyed fame for nearly a decade. Captured at a very young age in Africa, with its facies deformed by a spray of acid, Gargantua has developed into an exceptionally large adult male. He lived his last ten years in an armored coach, dragged in the ring by horses while the ringmaster depicted the significant features of the lives of gorillas in general and of Gargantua in particular. 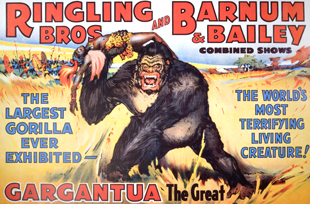 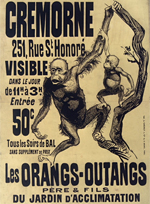 While there have hardly ever been any trained gorillas, the orangutans have been at the origin of at least one exceptional attraction, a prodigy of impregnation and almost invisible training keys, the result of which has provoked a violent controversy that has led to the cessation of the exhibition. Bobby Berosini's orangutans behaved on stage like real actors, sometimes on the edge of improvisation, even if the sequence was obviously very much written. The animals seemed to act alone, responding to commands that were so discreet that they became imperceptible and provoked public hilarity night after night. The method used to achieve this incredible result led the theatre management to stop the performances, paving the way for a better recognition of the constraints inherent to training and a new awareness of primate presentation. A necessary evolution that has contributed to the scarcity of this type of numbers. 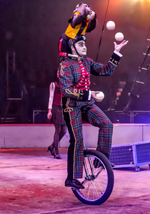 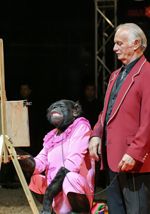 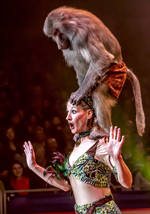