Mysterious powers of the mind

Based on the simulation of psychic powers of several types, mentalism is an artistic form that is part of illusionism. By minimising the dimension of manipulation and the use of objects, it expands away from the codes and repertoire of prestidigitation. The technique has apparently disappeared, and with it the idea of rigging or special effect. Mentalism consecrates the victory of the mind over matter or over other spirits.

One of the purest and oldest forms of mentalism is the transmission of thought. Since ancient times, pagan witch priests or charlatans have used illusionist tricks to influence their subjects, render mysterious oracles or answer sealed questions. Denounced by the fathers of the Western Church, this practice and its secrets are revealed by medieval Arab authors. During the Renaissance, magical-mathematical recreations regularly feature many divinations of numbers or mentally chosen cards.
In the 19th century, the most illustrious French prestidigitator, Jean-Eugène Robert-Houdin (1805-1871), and his son Émile presented a double-sighted number that marked imaginations. The Paris elite comes to present incongruous objects to the father, which he mentally "transmits" to his son by asking him some elementary questions. Mentalism is all the rage. The success of the act soon attracted imitators and Robert-Houdin developed a silent method based on a simple bell that guided his son to describe the object presented. 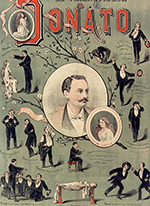 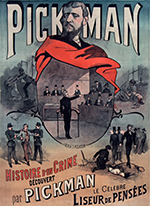 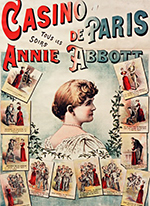 Contemporary artists perpetuate the tradition, such as, in France, the duets Gilles & Blaise or Antoine & Val, the Gilsons or Syl & Sun1. In their time, Pierre Dac & Francis Blanche had given the discipline its rightful recognition by dedicating their own iconic parody, Le Sâr Rabindranath Duval (1957), to it. But it was undoubtedly the people who inspired this sketch, Myr & Myroska (active from 1944 to 1984), who would remain in the memories as the greatest telepaths of the 20th century by their unparalleled techniques and this extremely subtle leitmotiv that concluded all their routines: "If there is no trick, it is wonderful, but if there is any trick, admit that it is even more formidable! " 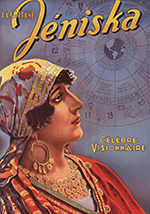 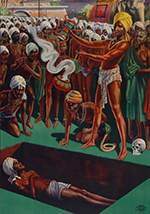 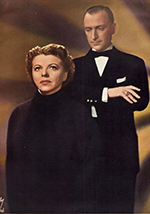 With Myr & Myroska, one of the key dramaturgical ideas of contemporary mentalism, which emphasises the promotion of an extraordinary talent rather than the use of psychic powers, is expressed in an extremely synthetic and powerful form. This is the position assumed by the main character of the television series The Mentalist, Patrick Jane, Patrick Jane, a repentant psychic charlatan and prestidigitator in his spare time. On the other hand, Jerome Finley, Richard Webster, Neal Scryer and Luke Jermay more or less explicitly claim to possess real powers. They are part of the trends of bizarre magick, psychic artists-charlatans or spiritual mentalism. 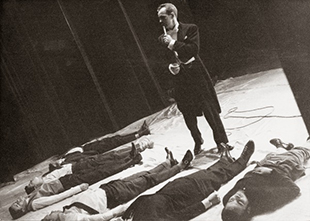 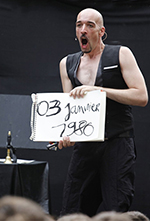 A few years before the series, the English magician Derren Brown (1971-) theorised this artistic position in his book Pure Effect (2000), which consists in opposing "psychic powers", but on the other hand in creating the illusion of an extremely powerful and skilful use of suggestion and of certain psychological subtleties. By bringing together the concepts of hypnosis and neuro-linguistic programming (NLP), Brown succeeds in giving the "diffuse feeling that [he] manipulates the minds of the audience". The artist plays a character at the crossroads of the investigator and the hypnotist. Mentalism is therefore based on the premise of human readability and influence and resonates fully with the notion of social engineering, which is mental and behavioural manipulation.

Mentalism, a tool for social investigation?

Taking up this question of power and manipulation, Thierry Collet (1966-), a contemporary actor-magician, raises a theatrical problematisation of the subject. After questioning the perception and its limits in his show Vrai/Faux, rayez la mention inutile (2009), he intensifies the process with Influences (2011) by tackling the question of social manipulation head on. Influencing the spectator's will, imposing behaviours on him or breaking his mental fortress by piercing his thoughts: Collet stages a brutal illusionism that moves away from magical questions. Magic then ceases to be the poetic operator that gave rise to the possibility of a dream. On the contrary, it becomes the instrument of the critical awakening of the spectators. Thus, Collet explores new ways of doing mentalism, transforming it into a tool for exploring social imaginative possibilities. 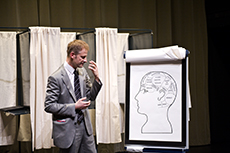 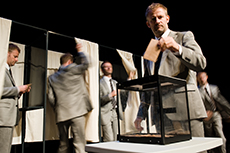 More subtle, his latest show of mentalism Je clique donc je suis (2014) avoids the psychic powers of the mentalist and replaces them with the dark power of new technologies (artificial intelligence, software, geolocation, piracy, big data, machine learning, profiling, etc.). The power relationship is no longer between two individuals but between man, machines and the immaterial nebula of this digital thought that drives them. In contrast to many illusionists, Collet puts technology in the spotlight here.

Omnipresent, it is even so effective that people begin to doubt its very reality. The classic spectacular paradigm is reversed: technique is no longer what makes magic possible, but on the contrary, it is illusionism that is sought by the spectator as an explanation of the technological demonstration.

Thus, we notice that the localisation of psychic power is one of the determining elements of the dramatic structure: directly from the illusionist in classical mentalism or at the level of technology in Collet's show. But couldn't we transfer power directly into the hands of the spectator? This is one of the paths explored by the Belgian magician Christian Chelman (1957-) under the name of X-Mentalism. This name is of course a reference to the X-Men universe, where everyone can discover superpowers. Despite its name, this form is not limited to Marvel but explores other fantastic themes (vampirism, lycanthropy, etc.). It offers a significant theatrical dimension that perfectly integrates the active participation of the spectator, who has discovered himself to be " sensitive ". With Collet's social mentalism, the spectator became aware of the violence of a separate power that was imposed on him; X-Mentalism, on the contrary, offers him to live a singular magical experience, the opportunity to test his own power. 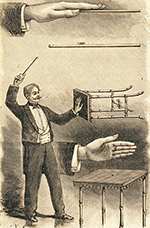 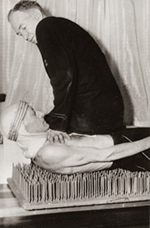 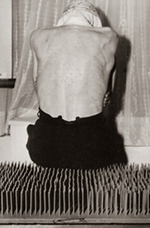