When in 1848 a fisherman from Hamburg received three live seals in addition to his usual cargo of freshly caught fish, there was no reason to believe that a milestone would soon be reached in the history of captivity and dressage. Carl Hagenbeck decides to exhibit his three new residents in a wooden tank, hands out a painted canvas in front of his stall and demands a pfennig to discover three familiar and surprising creatures. Very quickly, the success of this improvised presentation prompted him to do his sums and to try a new kind of business. 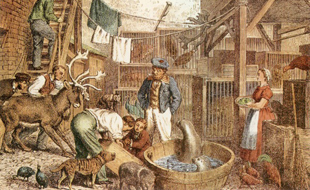 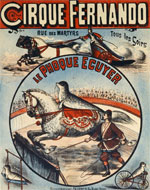 This anecdote is amusing because it reveals the part that chance plays in the continuity of things: a fish merchant in Revel in Haute-Garonne receives in 1881 from one of his Russian suppliers a... live seal! The animal is quickly trained and the skilful trader, who became the trainer Raziscoff, spends his evenings beautifully entertaining circuses and music halls with his skilful seal for which he invents a patented tricycle, propelled by a small dog, while his marine resident languidly sits on a platform...  . 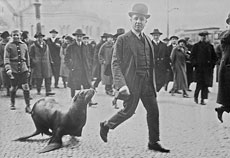 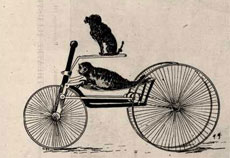 The prism and range of "marine animals" is broad: it covers the sea lions of California and Patagonia, the seals, the walruses, but also by extension the penguins and the dolphins. These singular beasts join the long cohort of living creatures that inspire the fantasies and ambitions of trainers and the curiosity of the public. A squire seal, placed on a panel on the back of a pony, enchants the spectators of the Fernando circus in the 1880s and this very simple presentation paves the way for many evolutions in dressage. A former acrobat, Armand Guerre, takes over a group of sea lions in 1936 and he turns out to be one of the best trainers of the 20th century, notably with one of his favourite animals, Oscar, which he presents on all the rings in Europe for 22 years.  Oscar is lively, unusual in size and responds to the trainer's every need with a fascinating bonhomie.

This is an area where these animals are sometimes referred to as "subjects" and Adolf, the Patagonian sea lion of the young Swiss trainer Roby Gasser, is one of the best examples. The huge animal seems to be a perfectly autonomous partner and shows extraordinary “stage intelligence". Despite its impressive mass, it is capable of astonishingly lively movements and, above all, it shows an extraordinary capacity to anticipate the intentions of its trainer. This sea lion is an exceptional beast, but these animals are capable of learning and memorizing many commandments and they display a disconcerting ability to manipulate objects of all sizes as well as master complex balances and equilibrium by leaning on their fins. 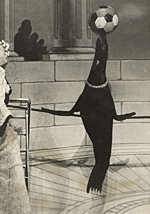 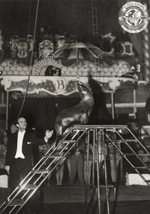 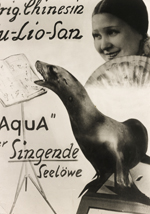 The training of the sea lions is based on the good will of the animals, the patience of the trainer, regular rewards in the form of small fish and short sessions so as not to tire the animals. Unlike seals, sea lions use their fins to propel themselves on the ground, simulate applause, and, as Adolf is able to do, strongly push their trainer around.

To associate the natural element of these animals with their presentation on the ring and undoubtedly pay tribute to their exemplary ease in the water, some stable circuses such as the Blackpool Tower Circus or the New Moscow Circus, equipped with a swimming pool hidden under the floor of the ring, took advantage of this spectacular equipment to transform a traditional act into an original attraction that was very much appreciated by their public. The American trainer Barbara Morris introduced her sea lions to the Blackpool swimming pool by offering them -for the duration of her contract- the opportunity to dive and to jump out of the water to pass through hoops held by outstretched arms. 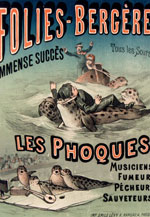 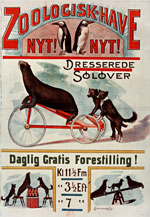 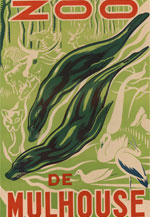 The swimming pool of the New Moscow Circus has allowed in 2011 to present one of the very rare trained walruses in the history of the circus. The huge beast takes a few turns in the middle of the fountains that embellish its presentation, but the public is more impressed by its size than by its flexibility or skill. Dolphins occupy a special place in this same category of unusual animals. More accustomed to amusement parks, these animals are considered very difficult to transport. However, there is an example of a travelling dolphinarium, implemented by the Ukrainian producer Nykolai Kobzov, where a sophisticated water purification system has provided a limited living environment for a few dolphins and a unique display area for the public to discover the elegance of these beautiful mammals. Without succumbing to the temptation of the dolphins and the complexity of their conditions of captivity, the circus Knie also designed a mobile device, a dismountable swimming pool just the size of the ring, to present trained sea lions in just under a metre of water, a pool where the animals nevertheless prove their ability to dive with a confounding ease. Vicky and Hans Pedersen, who add a few little penguins to the presentation of their sea lions, Teddy Lorent, Nadia Gasser, Roland and Petra Duss, as Hella Deckers or Barbara Morris before them, embody several generations of trainers fascinated by the strange appearance of these slender, black and sparkling animals whose startling capacities for understanding and interactivity excite the curiosity of the spectators. 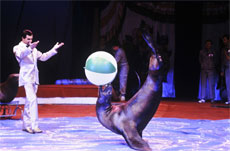 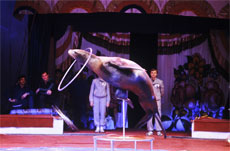