Tricks using coins or banknotes often have a real appeal for the public. The prestidigitator J.-B. Bobo (1910-1996), compiler and editor of Modern Coin Magic (1952) - the main work on coin magic - explained: "Money has always fascinated people, so magic with money is doubly fascinating. "We will therefore present here as a priority various artistic approaches to coins and banknotes as money. Requiring limited and available equipment, the coin manipulator can never be caught off guard. He is always ready to respond to the requests of his audiences and to improvise an act. For Bobo, coin magic is also distinctive for its very visual and easy to follow character. 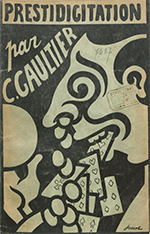 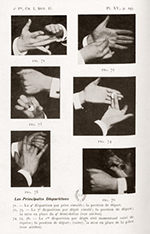 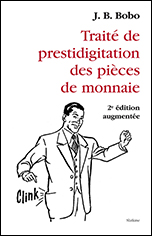 The dream of the miser

Magically producing gold or silver, this idea has been haunting alchemists' nights since antiquity. Making dreams come true is the task of the magician.
Under the guise of a pseudo-scientific pitch, Robert-Houdin (1805-1871) staged his "hunt for coins" act. Describing a chemical process known only to him, he recomposed 5-franc silver coins from the "metal fragments" in suspension in the atmosphere. Grabbing the coins, he throws them into a worn hat... before making everything disappear. Finally, he presents "the golden rain" by revealing gold coins in a vase and deceitful advertising notes from the Robert Houdin Bank, "to the point of being forced to pick them up with a rake". 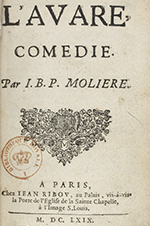 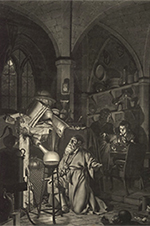 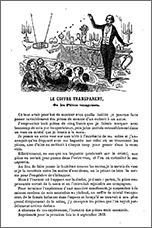 The German Compars Herrman (1816-1887) later introduced the trick in the United States. But it is the "king of coins" T. Nelson Downs (1867-1938), who, under the evocative title of The Miser's Dream - taken from the French B. de Linski -, made him massively popular on the vaudeville stages. An illusionism classic was born.
The contemporary magician Jeff McBride (1959-) regularly presents his own version under the title The Sorcerer's Apprentice. It is a real stage act that actively involves a child. This magical comedy in the form of an imitation game symbolically tells the story of a young magician's initiation. McBride goes beyond the simple staging of a magician with powerful powers to become a guide and a transmitter.

More prosaically, money remains for many artists, who work in close-up for tips, the objective of their performances. The real challenge of professional magic is therefore to be able to keep the banknote at the end of the act. For this reason, artists compete with each other in ingenuity and artifice. The banknotes will be damaged or dirty, making it easier for them to be donated... From a 20 € banknote, we will make two 10 € banknotes, thus prompting the idea of a possible sharing... A guest book will incidentally show the tips provided by the other tables…
If it is the object of the desire for accumulation, money is above all a means of transaction. Fantasy illusionism gives it this initial role again. At the opening of his shows Abricadabrac or Orishas, Christian Chelman (1957-) regularly uses a vanishing number of coins to symbolise the ritual offering to the spirits he is seeking help from. Similarly, by magically sending money through the space-time continuum to one of Jack the Ripper's victims, the Belgian illusionist is trying to change the course of history... but what is written is written! 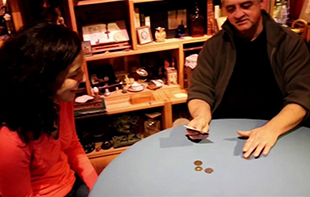 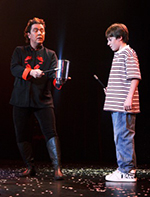 Banknotes and coins are part of everyday life. McBride offers artists the opportunity to profoundly transform everyday moments, such as a gratuity or tips, into a truly magical experience. Thus, he makes a multicoloured ribbon appear ex-nihilo, asking his interlocutor to make a wish and then metamorphosing the ribbon into a $5 banknote that will help him "get closer to his wish". Money is therefore re-imagined here in its intermediary character and not as an end in itself. Symbol of pure potentiality, occult power, universal converter, Karl Marx will not hesitate to describe the "magic effect" (Zauberwirkung) of money1. Offering to present to the audience "The greatest illusion ever created by humanity", McBride... takes a bank note out of a burning wallet! A memorable way to introduce a torn-and-restored banknote routine against a backdrop of thoughts about the destruction of forests and the need for a reconnection with nature. Illusionism then becomes a vehicle for true artistic and social reflection.