The juxtaposition of one or more disciplines in circus shows was achieved in a very natural way from the end of the 18th century. It has been promoted by the addition of technical elements, often derived from everyday life. But before cycles of all sizes entered the ring, it was the horse that established itself as a first living medium to develop a new juggling register. If ancient matabare and desultor can be considered strong ancestors, it is perhaps a certain Taillefer, soldier of William the Conqueror, who during the battle of Hastings in 1066 intimidated the enemy by manipulating his spear with amazing skill! From the very beginning of the modern circus, riders like Price and Balp take the risk of perching on the backs of galloping horses to integrate a few juggling figures into the practice of vaulting. The apparent conflict of the forces involved, the instability of the horse and the constraint of centrifugal force increase the difficulty of the work, but this unexpected combination brings a whole new level of technical and artistic appreciation to the circus. 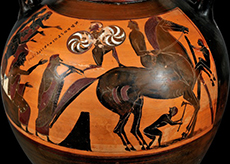 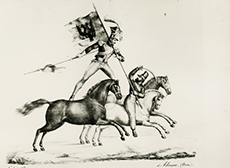 In the 19th century, juggling on horseback became a discipline in its own right. Andrew Ducrow, Pierre Mayheu and Henri Franconi twirl flags while Catherine Franconi, an elegant horsewoman, juggles with apples that she catches... at the end of a fork. In a similar vein, a poster by the German lithographer Adolf Friedländer also shows a juggler standing on a horse with spinning plates on thin bamboo sticks. The contrast between a manipulation technique from Asia and a very Western equestrian practice allows jugglers like Jean-Baptiste Auriol, Léopold Loyal or Charles Ducos to demonstrate their double virtuosity. Traditionally heavy, between draft and Percheron, the horse is bridled short, the back covered with a thick saddle pad or largely powdered with resin to ensure perfect adherence to the rider standing up. 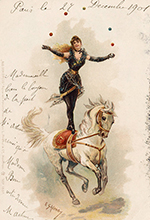 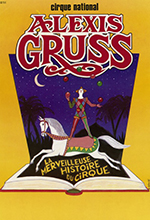 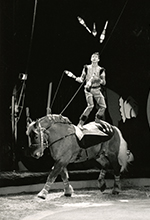 This stability allows the technique to evolve and diversify, particularly in the Soviet Union and in Hungary. The Moscow Gonka thus offered the Parisian public a succession of horse feats, including the famous number of the Zapachny brothers, exceptional horse-riding jugglers. In 1960, when Nikolaev Olkhovikov performed in Paris with a Moscow Circus troupe, he caused astonishment among amateurs and specialists. Endowed with a prodigious sense of balance, he juggles with wine glasses that fall back into rings where they are held thanks to centrifugal force, with three clubs and a ball or even easily masters a six-ball cascade trick. He also manipulates flaming torches, standing on a lighter mount and creates an "awesome juggling of flames, perched at 45 degrees on a horse literally galloping with its belly on the ground..." In addition to his beautiful baritone voice, Nikolaev Olkhovikov studied opera at the Moscow Conservatory and juggled on horseback while performing opera arias. 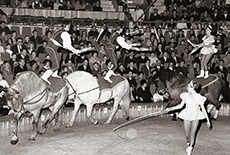 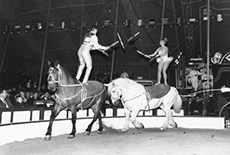 La Chevauchée Tartare, created by Stephan Gruss in 1984, is a masterful concentration of raw energy and pure virtuosity. Standing on a powerful galloping horse, the very young juggler juggles with large black fur chapkas or flaming torches and he shoots with his bow at a straw target placed in front of the backstage curtain. The speed of the sequences and the precision of every single manipulation make this number one of the highlights of the show and undoubtedly one of Alexis Gruss's most accomplished creations. The rider played by Stephan Gruss comes from a long lineage where German, Belgian, Russian and Hungarian riders have already marked out the terrain. The Brumbachs in the 1950s and 1960s, Harry Mullens and Margot Edwards in the 1960s, the Picards, the Silagy's and the Dunaïs in the following decade, but above all the prodigious Sarvat Begbudi until the 1980s, were the most prominent names in this field.
Today, Charles Lamarche and Sébastien Chanteloup, the Sadoevs or Alexandre and Charles Gruss, Stephan's sons, perpetuate this particular tradition of juggling on horseback, a register that has become rare and totally absent from the contemporary repertoire. 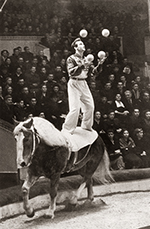 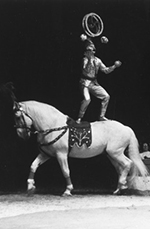 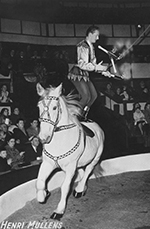