The Laufmaschine, literally "running machine" or " Draisine ", named after its inventor the German Baron Karl Drais von Sauerbronn, called velocipede in France or hobby-horse in England, is considered as the ancestor of human-propelled cycles. The invention makes people smile: the author Eugène Scribe and his acolytes Dupin and Varner created Les Vélocipèdes ou la poste aux chevaux at the Théâtre des Variétés in 1818, one year after the first appearance of the draisine, on the 12th of June 1817 during a demonstration given by the baron himself between Mannheim and Schwetzingen. Nevertheless, quickly perfected, the new machine conquered the world and inevitably inspired acrobats and... jugglers! 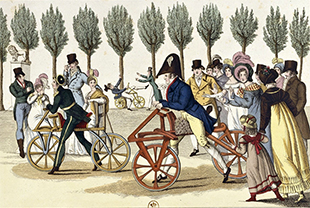 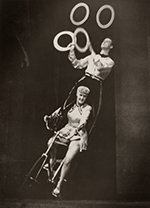 In 1887, a family troupe, the Selbinis, presented a number that combined both acrobatics on grand bi and a juggling sequence performed by a young woman standing upright on the head of her partner who pedalled and provided stability while juggling with balls. The importance of a smooth and even floor has encouraged the development of cycle work on the stage of theatres and music halls. When the circuses fell in love with this new discipline, they acquired mobile floors, quickly assembled and dismantled in the ring of itinerant companies. This form of "technical accessibility" has considerably helped to popularise a discipline that is very demanding in terms of stability. If the use of the acrobatic bicycle is motivated by a search for symbolic similarity with horses, the integration of the unicycle, the favourite apparatus of jugglers on cycles, contributes to another dimension. Like the Dunai with their horse to horse club throw, the Gerardi perform a series of giraffe to giraffe passings. Above all, it is a question of demonstrating an unprecedented double mastery, the management of a spectacular tension between holding on an unstable object and the manipulation of objects. 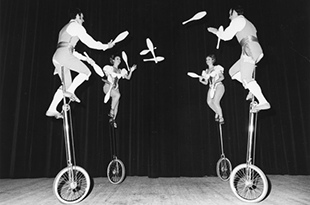 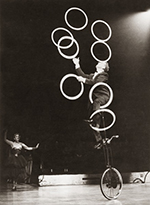 Charly Woods further complicates matters by perching his unicycle on a table about a metre in diameter, playing the drunken part and multiplying the knowingly calculated risks of falling as a likely conclusion of his throws. The use of the "giraffe", a tall unicycle, is common to many cycle jugglers such as Maysy and Brach or Payo. The latter, balancing on a giraffe, propels a spectacular rotation of twelve hoops along his other leg, his arms and on a stick that he holds in his mouth... The duo Jamino performs on a circular platform placed at the top of a mast nearly four metres high: one of their exercises is to drop clubs from the platform using the wheel of a giraffe so that they can be picked up by the partner on the ground and then thrown back to the female juggler balancing on her high unicycle... This virtuosity is characteristic of the discipline. The Vid'Or trio mixes columns and manipulation, Caprice keeps the balance of her unicycle while manipulating a high pyramid of candles stuck in cups while Lebrac and Bernice juggle with hoops of unusual size or Michaels and Renata complicate their work by juggling on a unicycle while climbing up or down a staircase. 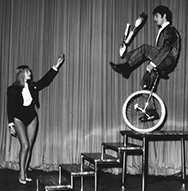 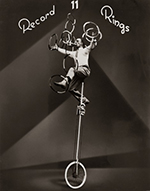 In 1959, a young American juggler, Jimmy Hall, introduced a routine borrowed from the games of skill popularised by the Chinese in the early 1950s. The act consists in propelling on his head with his foot some saucers, cups, spoon and teapot filled with tea while the other leg maintains the balance, which is inevitably precarious, of the unicycle. Gao Jin in 1983, the acrobatic troupe of Inner Mongolia or Fu Xiu Yu, who complicates his juggling on a unicycle by performing it on a wooden ball, embody this virtuosity characteristic of the most convoluted "compositions" that some jugglers have always loved. The German Rudy Horn in the 1960s and 1970s, the Russian Stolyarov in 1976 and the French Angelo Ballan in 1983 adopted this fascinating technique, where opposing forces seem to unite to further weaken a manipulation between balance and antipodism. 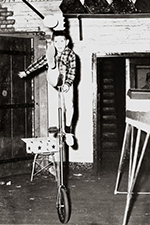 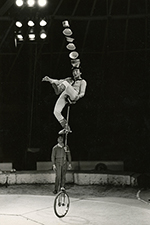 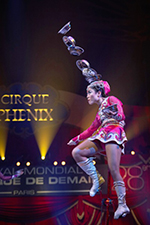