Symbolically and technically, the bounce is a variation of the ricochet. The stone that "leaps" over and over again on the surface of the water is a close relative of the ball that hits the ground and jumps to the hand of the person who controls it, but it is precisely in this restraint where the virtuosity of this type of manipulation is embedded. The first juggler to have exploited and made the most of this ability for an object to be able to bounce "under control" was the American L. A. Street at the beginning of the 20th century. He developed an initial repertoire of figures motivated by the material of his balls, a rubber that is both soft and solid and bounces perfectly off a hard surface. 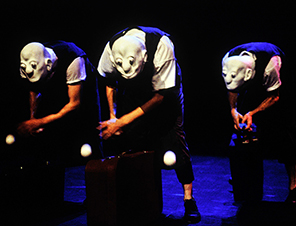 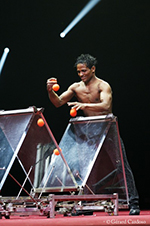 The properties of the hevea tree have been known for centuries and mastered by the Amerindian peoples who know, cultivate and worship it. Imported into Europe in the 18th century, it is used in many applications, including in the composition of rubber balls, which are suitable for handling and... bouncing. The material conditions the evolution of the discipline and technical innovations, from silicones invented by J. F. Hyde in 1938 to the Super Ball, a synthetic rubber toy created in 1964 by the chemist Norman Stingley, promote the development of manipulation and handling. Ball games, such as jokari or Basque pelota, are based on the bounce principle, but remain very much linked to sports practice. The Towas, the Garzonis or the female juggler Luli Perezoff are the equivalent of the pioneers of the discipline, particularly by associating sound effects with it. The technique definitively gained in visibility and flourished in the early 1980s with Michael Moschen's applied research, based in particular on triangular structures that offered infinite possibilities for trajectories. 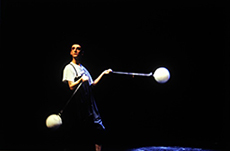 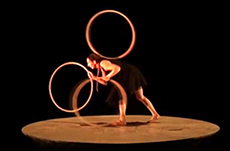 This new dynamic, at once visual, performative and poetic, opens the way for several generations of jugglers to seize its codes and better transcend them. By winding between a few dozen balls on roller skates before grabbing them for bouncing sequences, the Ukrainian Katya Nikiforova changes the perception of the discipline. It can also sometimes be a return to the organic purity of the bounce, starting from a simple marble slab and a remarkable dexterity, but also of an assumed complexity with the implementation of structures with geometric shapes. A learning centre in Ethiopia provides young jugglers with an introduction to bouncing ball technique with amazing results! It is an almost generational principle that fosters the emergence of dozens of jugglers, boys and girls, who are able to master the complexity of trajectories and combinations, and sometimes go much further than that. Whether solo or as a duo, artists such as Girma Tsehai and Melaku Lissanu, the latter sometimes associated with a young juggler under the name of Mela and Nunyat, perform in Europe and are emblematic of an unprecedented trend in the diffusion and popularisation of the bouncing phenomenon. While the performances are conventional, almost formal in their construction and application, there is sometimes a hint of humour to break the repetition of attitudes and gestures. On the other hand, an assumed sense of humour characterises the work of jugglers such as Emile Carey from Quebec, the Triplex from Toulouse, Odette Robbins from Australia and Johan Welton from Sweden, the latter also juggling in the street with an inexhaustible gift of the gab. 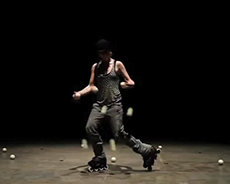 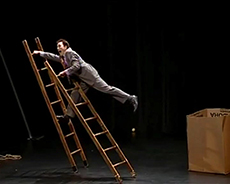 The bounce technique sometimes takes on the appearance of an odyssey: the Chinese National Troupe has developed a number of incredible complexity based on a monumental structure that folds and retracts mechanically, a pretext for the implementation of a dazzling technical vocabulary. Four jugglers, three girls and one boy, multiply the combinations and play with black light effects for a demonstration of pure virtuosity. This notion of hyper-technicality can also be appreciated in reverse with a very strong sequence of the show Risque Zéro created by the Galapiat company where four jugglers propel ping-pong balls with their mouths while multiplying the number of passings and bounces using a wooden board oriented according to the part's needs. A way of integrating the bounce into a theatrical perspective and placing it at the service of a purpose, following the example of the sequence of the Cirque Plume show L'Atelier du peintre developed by the artist from the Lido de Toulouse Tibo Tout Court. 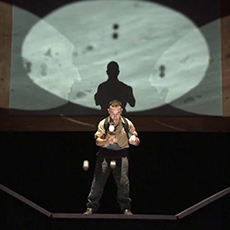 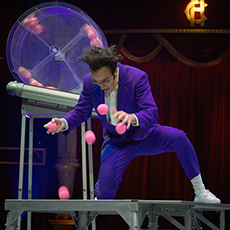 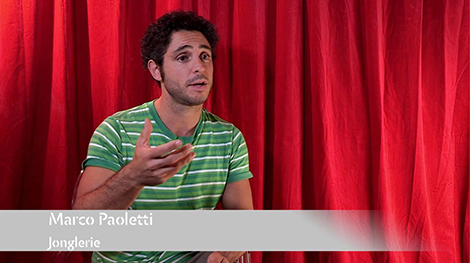