Family transmission makes it possible to form remarkable and generalist acrobats, who are then able to specialise and become, according to their abilities, equilibrists on horses, wire, pedestals, on a ring-tested apparatus or on any other device, designed to make performance even more complex. Between 1835 and 1840, the grotesque Guertner 1 or Jean Gontard, prefiguring "clowns" in the troupe of the Olympic Circus or the National Circus, juggle with pins or balls on a walking globe or a stack of chairs like Auriol with bottles or "salad bowls" spinning at the end of a stick or on a horse's back. 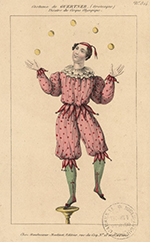 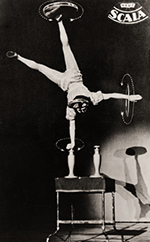 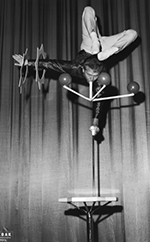 The ease, skill and extreme concentration that constitute the circus artist's natural background are exacerbated in the juggler. Flipped over on an unstable apparatus with only two feet resting on glasses, the balancing juggler Pifar Shang grabs between his lips a cup filled with liquid to empty it while spinning saucers. Since the late 1950s, he has been touring tirelessly in circuses and cabarets throughout Europe. The sets of a nascent television station like the BBC invite him several times. Discovered in the Schumann and Medrano circuses in 1950, then in the circus of the brothers Knie the following year, Little John - John Seidel -, the child prodigy born in Denmark in 1940, has a parallel, dazzling destiny that still has a strong impact on the audience at the Monte Carlo International Festival in 1975 and is the perfect fusion in terms of object manipulation and balances on unstable or rotating supports like the Charlotte Zerndt's device. 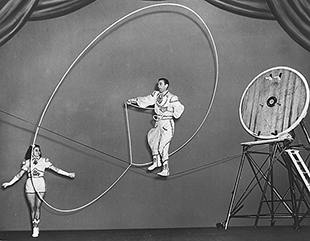 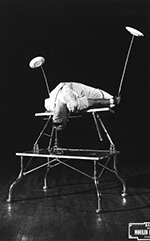 Walking and even simply standing on a wire, flexible or tense, requires great control of the body, the simple weight of which makes the cable vibrate, bend or swing. The combination with another discipline such as the manipulation of thrown objects or juggling adds to the difficulty of disrupting the balance of more or less periodic, continuous or discontinuous movements. 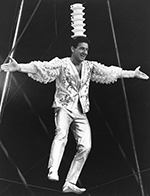 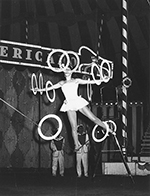 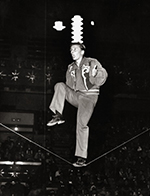 In his cowboy outfit, Collins leaves the floor of the... cows to climb on a stretched wire and throw his knives at a moving target, all around his partner Elisabeth. In the same tradition, he leaves his knives to make circles with a lasso, always on his cable. From childhood, Gipsy Bouglione2 assiduously followed the teachings of her mother, a wire artist, and she observed and imitated the artists who performed in the family circus to assimilate the juggling routines. Throughout her career as a versatile artist, she has been involved in the manipulation of balloons, pistols and other juggling objects, on the ground and on the cable. Like the American Dieter Tasso, the Martinis adapt on the wire the Chinese prowess of launching from one impulse with the tip of their feet, one by one, five to ten cups with their saucers, to the top of their heads, without forgetting, to finish, the teaspoon. 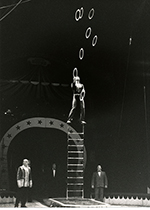 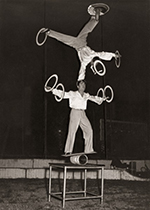 In search of spectacular patterns, jugglers create a whole range of balances applied to a wide range of devices or apparatuses. Thus, it is with a dagger in his mouth and a sword on its blade extremity, a tray of glasses set on its guard, that the young Vietnamese Cho Quang Tje performs his balances on the heavy bar of his Washington trapeze, which thus brings him to the ground. Performed by Rogana or the Madcaps, the exercise called "pointe à pointe" ("point-to-point") is performed by Marco, totally flipped over smoothly back on a ladder. In his Circus Incognitus, Jamie Adkins, in precarious balance on apparatuses that seems to escape him, continues to manipulate objects, from the familiar to the unusual. The collective passing combined with a deliberately moving apparatus such as the Gruss family's rotating rocker or the trapeze of the AOC collective [Autochtone, 2009], broadens the space of the demonstration by throwing and crossing objects in both vertical and horizontal dimensions. The exchange across the ring and on different levels involves singular relationships and talents brought together in a performance that is understood differently than as the achievement of an exceptional soloist. 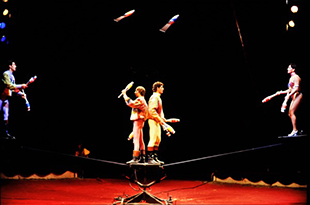 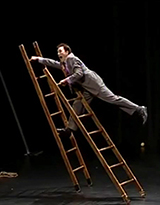