"The premise is that, if he is certainly not a therapist, the hospital clown has therapeutic virtues; if he does not treat, he could well be himself a kind of remedy, a happiness pill or, if we prefer, using the beautiful formula of the great psychiatrist Stanislas Tomkiewiz, a "resilience tutor" for sick children. […] "
Caroline Simonds and Bernie Warren1

At the turn of the 20th century, clowns were already going beyond the ring to bring children a form of comfort, to give them back their smiles and playfulness. In France, under the initiative of Mr Servat and Mr Rifflard, the Œuvre Laïque d’Éducation Scolaire organises a series of reciprocal visits by children and artists to the performing arts venues and in hospitals. So, in Paris, in 1909, in the presence of the director and the carers of the Herold, Bretonneau or Les Enfants-Malades hospitals, Chocolat, the children's favourite clown, accompanied by Orlando Averino, Foottit's sons, then fifteen years later, the Fratellini trio, began to perform goofy songs, gags and antics, without omitting to pay a particular attention to each one of the little sick children in the communal ward. 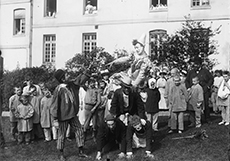 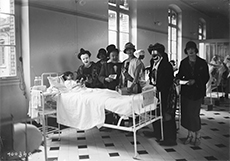 The emergence of clown doctors

A true American doctor, albeit a professional clown, Hunter "Patch" Adams, established as a complement in the treatment of the disease the combination of laughter and love and compassion. In 1971, he created the Gesundheit Institute in Hillsboro, West Virginia, to test his care program.
In the same vein and at the initiative of a real clown, Michael Christensen, a charity program, the Clown Care Unit, was created in 1986 in the United States within the Big Apple Circus - literally the Circus of the Big Apple, which means New York City. It allows professional artists to volunteer with hospitals to provide children affected by very serious illnesses with means of expression through play, the stimulation of the imagination, the staging of emotions or the parody of powers, all highly hierarchical in the hospital environment.
An American actress and musician, Caroline Simonds, who is experienced in street entertainment, transferred from the Clown Care Unit and created the association Le Rire Médecin in 1991 in France to work in the paediatric oncology department at the Gustave Roussy Institute and in the intensive care and resuscitation unit at the Louis Mourier Hospital. Caroline Simonds, aka Doctor Giraf and Anne Vissuzaine, Dr Claudia Choux-fleur, clowns and administrators of the association, carefully select new clowns, who are motivated, trained, aware of their commitment to a grave, dignified group of patients who hope for a better life, with the objective of developing and establishing a therapeutic practice through laughter in the children's wards of the hospitals. 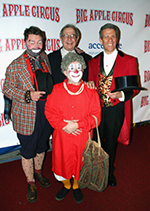 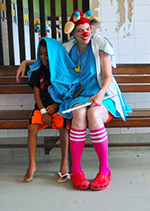 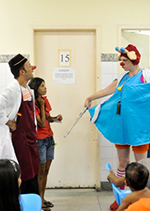 The "clown doctors" approach is characterised by the regularity of their weekly visits, observation-based techniques, a good knowledge of the hospital environment and a collaborative work with the nursing staff. Hospital clowns interact with children in a playful way, parody the healthcare routine and carry out small poetic transgressions to help them reclaim an environment marked by suffering and isolation, and to reduce the traumatic effects of painful or frightening procedures. Play, singing and music are all privileged supports for short improvised interventions that are prepared at length during group training sessions and psychological support sessions conducted throughout the practice. 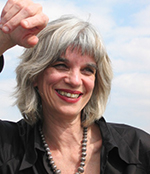 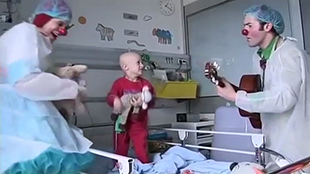 "The "clown effect" does not only affect the child, it also benefits the entire therapeutic community around him or her in paediatric services: parents, family, relatives, but also doctors and the healthcare team who discover or rediscover that humour, dreams and fantasy have their place in the hospital."
Caroline Simonds