At the very heart of traditional prestidigitation, general magic revolves around a few great and classic tricks that any magician can master to build up his own routines. From the parlour to the street and including the circus, general magic is based on a wide range of effects that involve a very diverse set of props, from the simplest such as rings or strings, to the most modern.

Simple circles of bare metal, the so-called "Chinese" rings stand out for their purity and offer many possibilities. Since the 16th century, whether they are in groups of three, five or eight, the rings have been crossing each other, becoming entangled and separating, in a steel ballet that challenges the reality of what we call matter. The manipulation of the rings teaches that there are two ways to produce the magic effect: one fast, the other slow. A sudden break between the before and after shape creates a surprise flash effect. The second way gives the imagination time to grasp the ongoing process. The rings cross slowly, inevitably, inexplicably. In 1973, Richard Ross (1946-2001) won the FISM Grand Prix with a routine of this type, marked by visual poetry. To further amplify the effect of slowness, the Ukrainian Viktor Voitko (1968-) adds to the illusion of crossing the illusion of levitation. 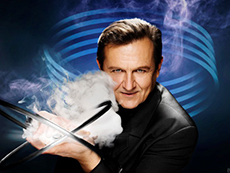 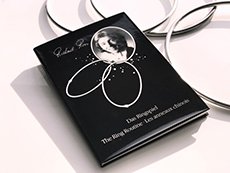 Mythologies of the thread and poetry of the strings

Certified since the 16th century, the "Hindu thread" trick – in English Hindu or gypsy thread – occupies a special place in the repertoire of magicians. The trick is simple: a thread is cut many times and then restored to its original state. It is this very simplicity that constitutes its evocative power and lends itself particularly well to a symbolic reading. Thus, the American magician Eugene Burger (1939-2017) presents several interpretations of the Hindu thread, which has become a great prestidigitation classic. One evokes the cosmogony of Hindu mythology, marked by the creation, destruction and restoration of the universe. The other makes this trick a metaphor of life, its hazards and sorrows to end with the magical possibility of overcoming all obstacles and reconnecting with others and the world.
The French magician Jacques Delord (Jacques Lajunias, 1928-2006) also gives his vision of this trick. Delord sees in it an illustration of Paul Fort's poem, La Corde, which painfully questions: "Why renew the love affair? The connection is broken, little girl...". Thanks to a banal thread reel, an eternal dream is being replayed: to find a lost original order, to promote a rebirth, to overcome separation.... under the power of magic. The first to build custom texts to accompany the string numbers was Jacques Delord. Inspired by an ancient engraving by Olaus Magnus1, he recounts the adventures of a sailor, "traveller of the distant seas", magician and strings manipulator. The prestidigitator Pierre Edernac (1919-2011) presents on a Symphony for a single string, a tiny string that initially elongates in an incomprehensible way.

Contemporary illusionists are seizing new technologies. Since the 1990s, Marco Tempest (1964-) has been developing techno-magic shows using screens, robots, or augmented reality to create a magical emotion. Following him, the German illusionist Simon Pierro (1978-), with a device equipped with a touch screen, pushed the principle of interactivity beyond its physical limit. The tactile interface becomes an area of exchange between the virtual world and the real world: the illusionist's hand can enter into and out of the tablet, both by virtualising and materialising the contents in turn. The tablet can then be used as a beer puller, a lighter or a tattoo machine. In the mentalism register, Thierry Collet (1966 -) gives artificial intelligence a direct role as a magician. 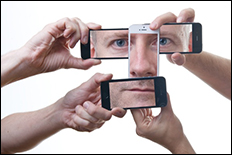 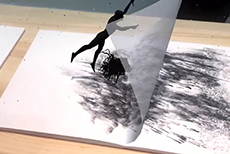 Magic at the circus

Magicians are an integral part of the circus world. The presentation of numbers is particularly complex due to the circular ring. The magician is then surrounded by glances. The configuration is well suited for pickpocket numbers where the manipulations must above all remain invisible to the participant but not to the public. The Serbian Boris Borra (1921-1998) toured with the most important circuses in Europe and America, first alone and then accompanied by his son Charly. Introducing themselves as cigar and cigarette manipulators, they quickly reveal "borrowing" various personal effects from the spectators – watches, keys, wallets, glasses, even braces! – to their greatest amazement. Pierre Jacques († 2003), another magician-pickpocket accustomed to the circus rings, plays at the same time the role of the Ringmaster (Monsieur Loyal) at the Jean Richard circus during the 1970s.

In the movie world, Robert Bresson used the talents of Henri Kassagi (1932-1997), manipulator and pickpocket, as technical advisor for his film Pickpocket (1959). Kassagi teaches actors the right gestures and the subtle body choreography that makes the film so striking.
But magic at the circus is not just for pickpockets. The American Jack Kodell (1927-2012), precise, elegant, presents a parakeets act in a different way than the British Norman Barrett in the Ringmaster's uniform. On the other side of the Pacific, the Kio circus family includes three famous Russian magicians: Emil (1894-1965) and his two sons Igor and Emil Jr, who perform show-stopping illusion acts, surrounded by dancers and extras. 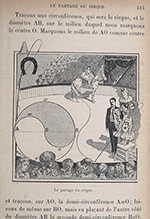 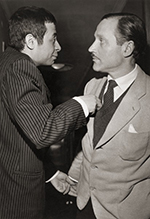 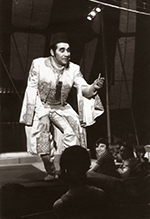 A figure of the prestidigitator has imposed himself on the collective imagination: the perfect gentleman, in a suit, elegant, self-confident and perfectly in control of his actions. With the tips of his fingers, he makes a dove appear, his inseparable companion! Endowed with an unparalleled stage presence, Channing Pollock (1926-2006) played the role of this classic magician in the 1950s. He inspired many contemporary artists such as Lance Burton (1960-), who owes his international fame to the number of doves that made him the first FISM world champion at the age of 22. Fred Kaps (1926-1980) also embodies this traditional figure. Distinguished by his nonchalance and charisma, he is unanimously acclaimed as one of the greatest of his generation. As a manipulator of balls, cigarettes and scarves, he quickly integrates completely new objects into his numbers: canes, lit candles or even banknotes that make him an innovator and a model. 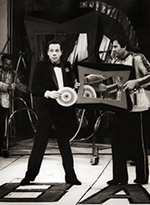 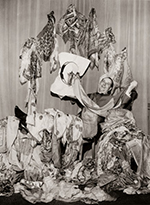 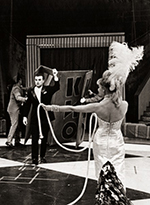 The apparition of the rabbit

The history of prestidigitation would not be complete without a mention to this other indispensable companion of the magician: the rabbit that emerges from the hat. At the end of the 19th century, the English magician David Devant (1868-1941) made it his signature trick, showing it on his posters, photos, films, optical toys and even his theoretical sum Our Magic. But at least two iconographic representations attest to the anteriority of this illusion: a poster by Burmain (circa 1830) and John Henry Anderson (1841). If Devant is not the inventor, he definitely contributes to the circulation of this strong image that exploits the visual contrast between the white rabbit and the black hat. Whether by producing doves, rabbits, fish, parakeets, chicks or mice in the 17th century, preceded by toads in the 16th century, magicians rekindle the very first and most important miracle of all: the emergence of life. 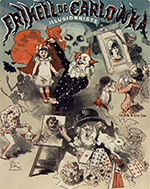 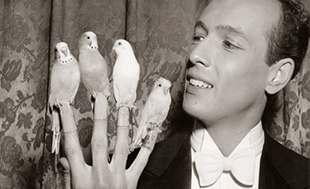