From one dictionary to another, the term exotic combines strange and foreign, unknown and distant, original and unexpected, curious and amazing, "barbaric" if the strangeness is difficult to understand, abnormal in any case. Nevertheless, if the definitions do indeed concern flora, fauna, women and men, symbolically qualified as exotic, these enigmatic "exotic groups", which were very present since the end of the 20th century in most major circus programmes, are nowhere to be found. Coming from the five continents, these wild animals, which cannot be classified as beasts, emus, zebras, giraffes, camels, alpacas, hippopotamuses or kangaroos, are visible in the menageries of the great circuses and are often associated with parades or featured in the ring. 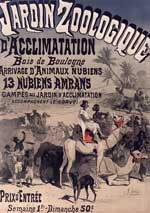 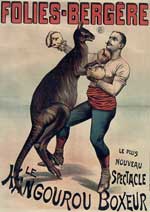 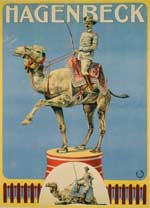 United under the name of "exotic", the members of this small family made up of fur and feathers, creatures that are strange and strangers to each other, touching by the grace of their fronts or impressive by their own strength, appear as a kind of Noah's Ark transported from city to city. Evocative of distant lands, often accompanied by extras recruited from a mosaic of countries, they feed the monstrous parades of the Renz, Busch, Sanger, Sarrasani circuses and, in the more recent past, the Extravaganza series from Ringling, Bros and Barnum and Bailey.
Is it really so strange, in the end, so absurd, to find such a diverse and "exotic" group of animals in the circus world? When setting the program for the season, the director of an establishment must be careful to diversify the attractions presented as much as possible. The original equestrian circus unit that used to showcase the prowess of squires, riders and acrobats, and of horsewomen, amazons and ballerinas on panels, linked by a few acrobatic or clown-like interludes is now abandoned altogether. The circus of the 20th century displays a whole range of international acts, some of which are totally unrelated to the others, chosen from among the strongest, the brightest, the greatest ever "seen"! In this kaleidoscopic context, the most "exotic" groups of animals find their place and the trainer is congratulated for his inventiveness and his ability to highlight and harmonise this generous heterogeneity which adds strangeness to the strangeness! 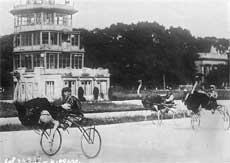 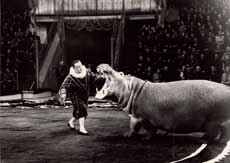 The spectacular attraction of an "exotic" animal – a llama, a rhino, a camel, a hippopotamus, a giraffe – comes from its original and unusual physical and behavioural characteristics, imbued with this taste for distant lands, that it represents and embodies. All the precious and exceptional qualities that its capture, its exhibition, and even more its training to make it fit into the logic of a circus act, will gradually fade away altogether or to some degree.
When it comes to casting the roles, the trainer respects everyone's possibilities and distributes the "exotic" jobs, from the quiet parade to the execution of more sophisticated exercises. Even if a guanaco or wallaby has little opportunity in nature to jump between the two bumps of a Siberian camel kneeling under the eyes of an African Watusi perched on a small platform, side by side with a Scottish ox or a Cape eland…
His own inspiration and the observation of similar exercises that triumph under other tents, encourage him to mix species even more to offer to the amazed spectators in the 1990s, the ride of Suzanna Svensson on the ostrich Elisabeth at the Ringling Bros. and Barnum & Bailey Circus, those of Rolf Knie at the Circus Knie or Davio Togni at the Circo Il Florilegio, proudly perched on a giraffe or rhinoceros. At the end of the 19th century, the Folies-Bergère already presented a boxing kangaroo, integrated into a bidding war of human exploits where the wild and exotic animal, willy-nilly, embodies what remains of beauty and dignity. 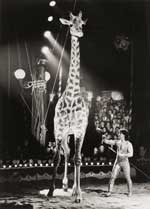 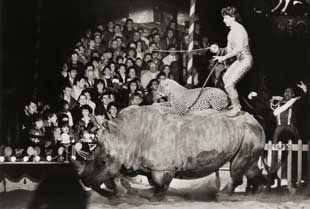