Man has been making deals with horses for several millennia. Precise and determined, he has strategically endeavoured to make it at the same time a partner in both labour and combat, but he has not neglected to give a spectacular dimension to this benevolent ascendant. The time of battles and charges is over, but the memory of the confrontation is intact and it is still part of the framework of some representations today when it comes to exalting the power of the horses and the virtuosity of the riders. 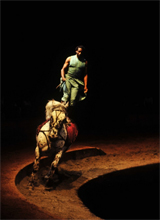 In the 1950s, the horsewoman Paulina Schumann created sumptuous equestrian paintings in which music and costumes played a prominent role. Inspired by a hue or a theme, she paves the way to regular creations under many European tents. The bare horses presented by Freddy Knie in the 1970s, free of all bridles or plumes, galloping in a cloud of heavy smoke pierced by bluish beams, are part of this reinterpretation of the great classical cavalry, in the image of the elegant re-enactments conceived by Alexis Grüss. Dressage has little or no freedom from its military roots and despite a sparkling dress, its codes and values have hardly changed. It took another decade for new troupes to appear capable of approaching horse training and presentation from a different creative angle. Founded in 1984, the Théâtre Équestre et Musical Zingaro preceded Les Cavaliers de l'Aventure, a company established the following year by Bruno Boisliveau, with the same concern to develop a different relationship with horses. By creating his first equestrian cabaret Cabaret équestre, Bartabas shifted the perception of dressage and already gave it a new character. 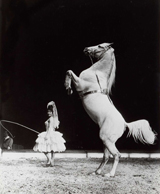 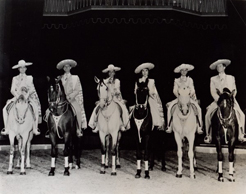 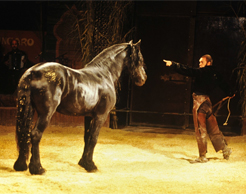 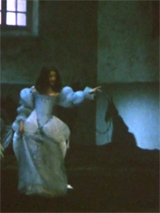 In 1985, an African proverb saying "Give a horse to the one who tells the truth, he will need it. " is featured in a production of Molière's Misanthrope by André Engel. The action is part of a riding arena, a setting of powerful proportions whose walls pierced by high windows and earth-covered floors give the vertiginous sensation of being in front of a very real space, anchored there from all eternity, like a sober mirror of the splendours of the Great Century, a new playground where several horses piaffe and snort alongside the actors in a scenery magnified by the light. The director directs his actors in step with their supposed horses. He plays horses as silky ramparts, sets them up as potential moving wings or uses them as benevolent supports. This leads to a subtle choreography based on singular bodies, aesthetically and dramatically assembled well beyond a simple spectacular pretext. Here, the horse is in harmony with men and women in a different register than the academic dressage or the presentations of free horses. This elusive work, between impregnation and education, suggests an additional level in the pyramid of possibilities. These "immobile" animals are part of an ancient lineage, but also suggest that the animal is capable of going in a different direction without losing its legitimacy as a (in)conscious actor alongside, or even on the shoulder of, worried actors. 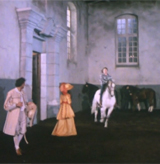 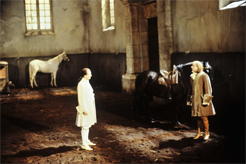 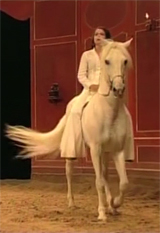 In 1989, Camille and Manolo founded the Théâtre du Centaure, a company where humans and animals question the principle of a new artistic fusion. They create a series of creations, opening up new avenues for the implementation of a different link between the rider and his mount. The two plays Les Bonnes by Jean Genet and Macbeth by William Shakespeare, respectively staged in 1999 and 2003, attest to the legitimacy of the actor-centaur, an ambivalent and magnificent creature that disrupts the spectator's apprehension: no one knows anymore whether it is the man who roars or the horse who speaks... La Chambre des Amants, a play for two horses, two riders and a string trio created in 2017, explores another level of complicity between a world of sounds and the virtuosity of dressage.
There are many tones of contemporary dressage and they are developed as a result of research carried out by trainers and designers. In 1991, Jean-François Pignon presented his free horses without restriction at the Cheval Passion event in Avignon. A member of a family where each of the three children seems to have a similar gift with horses, he develops an exceptional complicity with his animals. It is this intuitive dimension of dressage that led his brother Frederic to get involved in the creation of Cavalia, a company founded in 2003 by the Norman Canadian producer Latourelle. An intuitive trainer, he manages to create a fusional relationship with his horses and projects a strong image for the spectator by giving a form of reality to the evocation of the man who " whispers in the ears of his horses ". Cavalia was preceded by Cheval Théâtre, a company and show of the same name created in 2001 by Gilles Sainte-Croix with the support of Cirque du Soleil. Gilles Sainte-Croix also created in 2007 in Bromont, Quebec, Saka, a show that he developed over a few summers and in which he mixed humour, vaulting and strong images. With Penthésilée, the company Salam Toto, Théâtre de Cheval et d'Aventures chooses a dressage. 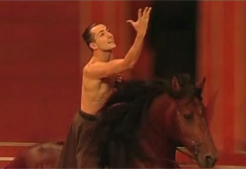 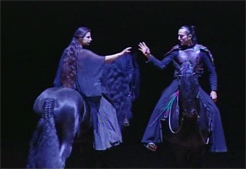 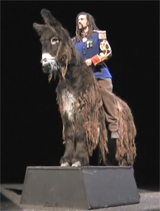 In 2006, the Théâtre du Centaure created Otto Witte, a unique show inspired by the story of a circus artist who was determined to assert his rights on the Albanian throne. Between fantasy and imposture, the character's obsession inspires the author Fabrice Melquiot to write an extraordinary play for an actor and a donkey. Directed by Camille and Manolo, Koko, a Poitou jackass, " acts opposite " David Mandineau in a strange fable where the madness of Otto Witte, king without a crown ready to do anything to win one, appears unceasingly, in a senseless quest in 1913, one year before the major conflict that marks the real end of the 19th century. Also in 2006, Bruno Boisliveau asked Pierrot Bidon, founder of Archaos, to direct Mélodie en cheval majeur. The commitment of a long-standing historical artist, totally involved in the development of the New Circus, places this creation of Les Cavaliers de l'Aventure within a broader artistic perspective. The company has multiplied its shows since its foundation, but without ever denying the horse's choice, including when Bruno Boisliveau imagined the puppet horse, a strong sequence of several of its shows where a horse is symbolically "operated" by cables attached to a giant device similar to the one used to handle string-type puppets.

This distance from the animal finds its full justification in the creation of War Horse on the 11th of October 2007 in London. The Handspring company stages real-looking wooden horses, animated by actors who slip into wooden carcasses, which are stylish and surprisingly accurate at the same time. Bunraku combined with simplified technology to reinforce the illusion of a horse that is both incarnated and virtual. This is merely a simple possibility in terms of performance, but it draws some unusual outlines. These animated ghosts, wooden horses subtly manipulated by movement virtuosos, magnify this complicity that has united man and animal for thousands of years. A dimension that contemporary dressage, dedicated to the removal of constraint, transcends with real horses. 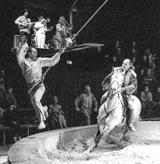 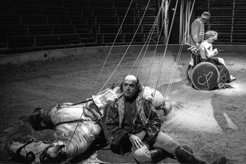 Playwright, visual artist and director, André Heller designed Magnifico in 2011, an extensive composition where the surrealist vocabulary turns the viewer's gaze towards a construction of powerful, festive and offbeat images where horses are at the same time background, pretexts and main characters. After several years spent travelling the world with Cavalia, Frédéric Pignon decided to create and produce with his wife a show that would reflect his personality. He asked Erick Villeneuve to direct EQi, presented for the first time in Monteux in 2014, at the foot of Mont Ventoux, on the stage of the open-air theatre on Lake Beaulieu. Conceived as a series of sequences, juxtaposition of intensities and moments of complicity with the horses, the show is a perfect match for the current criteria in this design mode. Baro d'Evel Cirk Cie shifts the lines a little by absorbing the presence of the horse in the same way as for three parakeets or a pied crow. Beyond a simple poetic license, the animals act the part, fulfill their role with their human partners and create a captivating representation.

In 2017, the Pagnozoo company, founded in 1986, called on director Anne Laure Liégeois to create a show where family involvement is total, where proximity to the horses is vital. J’accrocherais sur mon front un as de cœur is a powerful construction, a shared time where fragile stars glitter above a troupe of squires and riders, all carried away by the same ardour in the service of a writing that is both dense and sensitive. With Ex Anima created in October 2017, Bartabas chose to move man aside in order to let the horse express itself without limits or obstacles. The human hand is affirmed here within the performance assumed by the animals, but the precision and rigour of the evolutions are unequivocal, and the dressage is carried out with an extraordinary fluidity. Horses are the source of the creation, the driving force of an endless desire to give back to the animals a part of what they have given to men. Bartabas wanted to celebrate the real actors of his equestrian theatre, to show "a ritual without memory, a ceremony where the spectator will be surprised to see the animal as the mirror of humanity". The trainer becomes a "horse exhibitor" to work with them to "clear new lands...".