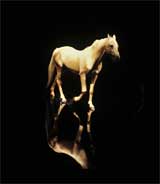 The animal on stage breaks the unity of a conventional setting. Its presence, the quintessence of truth, abruptly questions the weave of a universe where everything is faked. The animal creates the unpredictability of the actions, obliges those around it to take charge of the event it induces, it forces the actors to accept chance, to be ready for anything, or almost anything. In the ring, on the other hand, the animal is on a territory that has been conquered for a long time and it is in this area that the notion of evolution is crucial, that the notion of dressage in particular must now be re-evaluated in terms of creation, drama and accuracy.
One of the most significant changes in this area is this progressive shift in meaning and intent from a raging exoticism to a new complicity with the witnesses of our daily lives. A simplicity that does not exclude charm or curiosity, but which places the animal in a new dimension. In reality, the fascination for the living is intact, but it is enriched by a more contemplative and infinitely less demanding approach in terms of prowess, performance or risk-taking. Today, the trained 'savant' animal has a "real" role to play, an interesting contradiction when its presence alone is sometimes enough to justify its intrusion in the ring.

This idea of a living creature, with random reactions, simply positioned in a given space, refers as much to the presentation mechanisms of the cabinet of curiosities as to those of the menagerie, but the existence of these new actors is potentially wrapped up in intelligence and has little to do with the running of a pure exhibition. On the other hand, these stage animals have lost nothing of their ability to attract the attention of the audience. Their apparent banality is a paradoxical asset: inoffensive and close to the public, they constitute a formidably effective element of theatrical vocabulary.

In 1982, André Engel and his decorator Nicky Rieti drown the hall of the National Theatre of Chaillot in fog and haze and cover the seats with white fabric to present Heinrich von Kleist's Penthesilée (creation 1808). Alongside the actors, the director places Samoyed dogs, as white as the scenery, witnesses of the drama in the same way as the spectators and those who play it. With L'Orgueilleuse, Marie Molliens relies in turn on the text of the German playwright and summons acrobats, musicians and barzoïs greyhounds for a metaphorical interpretation of the romantic drama and a mise en abyme of the figure of Penthesilea, queen of the Amazons and fierce warrior whose implementation of Circassian vertigo for illustration purposes fits very well with it.
This "dressage" implicitly suggests an additional layer in the pyramid of possibilities. The syntactic ductility of these animals is comparable to the justification for the presence on stage of chickens and sheep for the In Vitro show of the Archaos company. These "immobile" animals are part of an ancient lineage, but they also suggest that the animal is capable of going off on a tangent without losing its legitimacy as an (in)conscious actor alongside, if not on the shoulder, of worried actors.

In the early 1990s, La Volière Dromesko (The Aviary) imposed another acceptance of the silent presence of live animals in a spectacular context. By creating a new stage setting with a translucent dome, by installing a tree with multiple branches and releasing two hundred birds accompanied by a winged horse and a few rats. ‘Dernier chant avant l'envol’ (The last song before takeoff) and ‘Vertiges’ (Dizziness) are proposals based on exchange and sharing, a different relationship to the tiny and the unprepared, an immersion of the spectator in the daily life of the birds.
These animals, from the horse to the raven, establish a new range in the desire for animals in a context that has long adhered to the strictest orthodoxy in this matter, by materializing since the 18th century a relationship based on a mixture of complicity and domination. In 1991, Cirque Plume, with ‘No Animo mas Anima’, offered Cyril Casmèze a magnificent pretext for abolishing further the boundaries between man and animal. By creating the "man-dog" silhouette, he crosses new boundaries already made porous by a handful of illustrious predecessors creeping and jumping in costumes sewn as second skins. Naked, or almost naked, "tamed" by a partner capable of cracking her whip with as much force and precision as a "real" tamer, the acrobat has nothing but his body and gestures alone for artifice. Cyril Casmèze has "only" his muscles combined with an extraordinary "animal flexibility" to make us forget that he is a man, but his composition is remarkable, truer than life, and his accuracy is astounding. 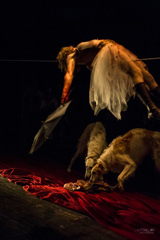 Twenty-five years after the founding of the Dromesko Theatre, carving a path that began in the early 1990s, Igor and Lily include live animals in each of their creations. They cultivate a form of theatrical instability inherent in their desire to play: ‘Le Jour du grand jour’ inserts several animals with an established status of accomplices into a serious and light frame: a pony, a pig and a marabou take on the role of animality in a performance where the sequences fit together like an intuitive puzzle, full of sensitivity and humour. The dogs as accomplices of the Cirque Aïtal founded by Kati Pikkarainen and Victor Cathala, in ‘Pour le meilleur et pour le pire’, in 2012, like the playful Zippo trained by Jacques Marquès for ‘Toiles’ at Cirque Plume in 1993, are there to shift a perception of dressage long considered as a cultural habitus to the intangible rules.
As an elegant counterpoint to these variations, the company Baro d'Evel creates ‘Bestias’ in 2015, a show where horses gallop and steal unusual little birds, raven, magpie and parakeets, more tamed than trained by Tristan Plot, fowler : the animals are associated with humans and formalize a new approach to proximity comparable to the approach of the barzoid greyhounds of ‘L'Orgueilleuse’ directed by Marie Molliens at the circus -theatre Rasposo.
The desire for animality and complicity is still as strong as ever, yet the status of the animal as a pretext, like this flying donkey in 'Le château des Lutins' in 1718, has evolved considerably since the 18th century. When the Latvian playwright Alvis Hermanis stages and creates the sets of 'La Damnation de Faust' at the Opéra Bastille in 2015, he places a living ox in a glass cage for the purposes of his dramatic approach. Times have changed: public opinion is in turmoil and the beast creates a controversy until its withdrawal in the following performances. A victory for some, the proof above all that the animal, strictly speaking, always has as much impact in the construction of a collective imagination and that its delicate and conscientious manipulation still has a bright future ahead of it. 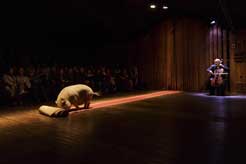 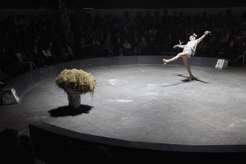