According to Jacques Delord (1928-2006), "prestidigitation is as old as the sense of mystery". The close-up by its simplicity and economy of means is presented as the oldest form of illusionism attested. However, we had to wait until the 20th century for this art to undergo its most profound transformation and clearly constitute itself as a codified discipline with its repertoire, its theory, its places and its masters, under the name of close-up. 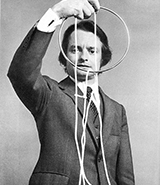 A technique based on zooming to get as close as possible, the close-up is mainly characterised by an extremely short distance between the magician and the spectator. The notion of "scene" is shattered. The landmarks of the show or “spectacle", etymologically considered as a discipline of pure viewing (spectare: to watch)1, are blurred. The magic experience unfolds in an atmosphere of intimacy with the spectator. Lead to participate, verify, choose, agree, intervene, he is part of the illusion. This is what the American Albert Goshman (1920-1991) explains: "The real magic is in you, it must come out, emanate from you. The magic is you." The objects are simple, generally usual and improvised. They consist of cards, coins, banknotes, cigarettes, matches, pins, wires, strings or ribbons, penknives, balls, salt shakers, and can fit in a pocket. Free from space constraints, perfectly adaptable, the close-up evolves by gradually expanding over time to increasingly diverse locations and audiences. 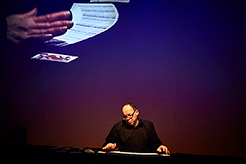 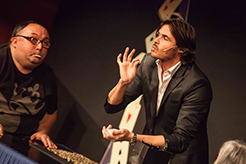 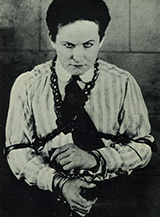 1919 symbolically marks the emergence of the close-up. In Chicago, a twenty-five-year-old magician responds to the challenge of Harry Houdini (1874-1926) who boasts of being able to crack any trick he would see three times. He shows him the same card trick seven times and the famous illusionist does not succeed in discovering his secret. Dai Vernon (1894-1992) performs for him an "ambitious card" routine where a card, placed in the deck, magically rises above it. To deceive the escapologist Harry Houdini, he used different methods to produce the repetition of the ascension effect and thus became "the man who duped Houdini". The publication of the Dai Vernon Book of Magic in 1957 definitively established him as "The Professor" and popularised "The Vernon Touch", his method for (re)creating effects: "using his head" and "being natural" to make the technique completely inconspicuous. Vernon stands out as the inventor of techniques and tricks, but also of magic themes, and each magician will try to give his own variation. He is the true mentor of a whole generation of artists, Charlie Miller, Larry Jennings, Bruce Cervon, John Carney, Ricky Jay, Jimmy Grippo, Michael Ammar or Michael Skinner… 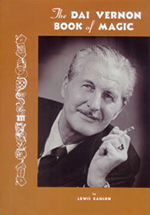 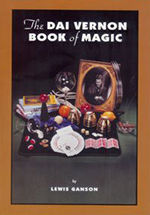 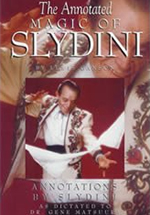 The 1930s in the United States saw the multiplication of "pocket tricks" or micro magic tricks, and the emergence in Boston of the Italian American magician Tony Slydini (1901-1991), one of the great masters of close-up and misdirection, who was a master at deflecting and managing attention. His work puts the simple trick into perspective and highlights the importance of body posture and gestures designed to produce illusion and mystery. With Slydini, the close-up acquires its body language based on two attitudes: tension and relaxation. The artist's body moves towards the spectator by leaning on the table or resting back on his chair. Action and inaction therefore seem to follow one another in a particularly effective body language. The alternation of the two postures creates a rhythm that grabs the spectator and imposes a perceptual framework for the viewer. By emphasising the tension, the magician conceals the secret movements made during the relaxation phases. The gestures are fluid but can sometimes be abrupt in order to refocus the viewer's attention.

With his Baltass act, Yann Frisch (1990-), winner of the FISM Close-up Grand Prix in 2012, has taken the art of gesture and misdirection to an unprecedented level while embodying a character of great dramatic intensity. Using only a cup, balls and a jug for everything, Frisch creates a character in crisis, plagued by anxiety, on the verge of madness. Against his will, the water becomes a ball. The ball becomes haunting, multiplying itself and constantly returning. Throughout the act, the character's hallucination and his inner world are communicated to the spectator until the return to reality, like a cold shower. Far from simple entertainment, magic then becomes a language capable of communicating an unspeakable experience in other ways. 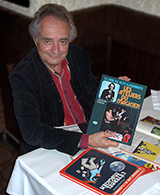 In 1969, the illusionist Jean Merlin called for the launch of the close-up in France, and to broaden the audience for magic shows, he offered magic "at home", in private homes or in the corporate world. It is then a question for him of breaking with the logic of the places of spectacle dedicated to illusionism in order to give new outlets to the magic art. In 1973, he returned from the United States where he worked at trade shows that took advantage of close-up for advertising purposes. He set up a first team with Elisabeth Amato, Bernard Bilis, and Philippe Socrate and imported American business practices into France for large companies. For Merlin, close-up appears both as a response to economic imperatives and as the possibility of a magical conception of existence: "To become a magician in the great sense of the word is to stir your spoon in your cup with the conviction that you could make it disappear with a single breath".

Very influenced by the writings of the American Slydini, Merlin would promote him to the French-speaking world of magic. He recreates the underlying principles through the musical conceptual couple of high tempo / slow tempo. This notion will influence some French magicians to become aware of the importance of the alternation between tension and relaxation developed by Slydini and more generally of the rhythmic structure of magic art. As a result, the close-up is given a solid theoretical framework and imposes its specificity. The 1970s in France saw a major democratisation of magic. The trilogy of the Illusioniste by Jacques Delord, his programs “Les Ateliers du magicien”, his collaboration with the magazine Pif Gadget as well as the programs of Gérard Majax (Maurice Faier 1943-): “Y a un truc”, “Passe-Passe”, “La caverne d'Abracadabra”, etc., offer the general public and more particularly children a series of tricks that can be reproduced under close-up conditions. 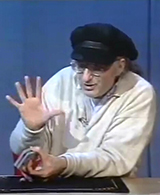 In turn, the Spanish school of magic embraced close-up and contributed to its development in a major way. Arturo de Ascanio (1929-1997) made a lasting contribution to the theoretical development of close-up. He proposed techniques and concepts still used today, including in-transit actions, different degrees of misdirection, apparent continuity actions, the obnubilant question, the omission parenthesis or anti-contrast. This approach is extended by Juan Tamariz (1942-...), another great Spanish cartomagician. Renewing the poetic origins of card magic, Ascanio offers sometimes complex tricks but always tinged with poetry. Thus, his "lover's trick", also called "the dark days", opens with the verses of the medieval Andalusian poet Ibn Zaydun. Creating an "atmosphere" is also what the Argentine magician René Lavand (1928-2015) brilliantly achieves. Accidentally deprived of his forearm, he is led to completely rethink the traditional repertoire to adapt it to his one hand. As a virtuoso magician, he manages to make all traces of technique disappear. Following the example of Michelangelo's forza di levare, he advocates the removal of all superfluous elements to achieve perfect gesture and art2. With a few cards, a common coffee cup and three bread crumb balls, the magician reaches for pure simplicity. Breaking with the dexterity and performance contained in the notion of prestidigitation, he replaces it with lentidigitation: slowness is the key! Contrary to what we think, the hand does not deceive the eye, it is the rhythm. The text also plays a crucial role for the Argentine. With the verses of "drinking alone under the moon" by the Chinese poet Li Po (circa 743) Lavand plays his bread balls routine, breaking with the traditional descriptive pitch. In this respect, he joins Jacques Delord and his work on the "poetics of word and gesture". Thus, Lavand ends each of his shows with a story. The result is a magical experience that no longer requires tricks.

The challenges of professionalisation 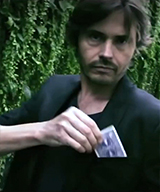 The opening of a real close-up market in the 1980s changed the performance constraints. Close-up enters the world of events. And so, it becomes more accessible in new places: restaurants, nightclubs, trains, hypermarkets, trade fairs... The masters of the old generation generally had a table to present their effects and an audience that came specially to see them. The new generation is quickly confronted with more difficult contexts, as described by the professional David Stone (1972-) in Close-up (2005). The balance of power is reversed: the public is no longer a priori seeking it. It is now necessary to know how to introduce yourself to a table, be able to gain public attention, expose yourself to doing and redoing a few tricks several dozen times during the event, and manage multiple parameters such as the clutter and size of the tables, a variable space between them, the comings and goings of the waiters. Magic can no longer create its own space but must instead adapt to a pre-existing rigid structure.

The recurring impossibility of placing objects on tables imposes a "vertical" magic. Similarly, the renewed presentation of the same tricks to different groups of spectators makes the easiest to prepare preferable. Being paid in "tips" leads to strategic choices in the acts, in particular in the final trick using banknotes. The need to advertise yourself can lead to integrating your business card into an effect. The search for full commercial efficiency is a fundamental condition for the field work of professional artists. Belkhéir Djénane known as Bébel (1963-) has been working in the streets of Paris for many years. Installed all night in front of his table at a metro exit, he presents his card or cup numbers to passers-by. The challenge is to capture their attention, keep it for the duration of the act and finally solicit their generosity. The street is the hardest school. The reaction of the spectators, freed from the constrained setting of a venue, is unpredictable and can be disruptive. It helps to forge the true qualities of the close-up man: improvisational ability, technical mastery, sense of repartee and social intelligence.

New technologies are providing new spaces and a new audience for close-ups. The show “Le plus grand cabaret du monde” introduces the general public to close-up men such as the cartomagician Bernard Bilis, Juan Tamariz or René Lavand, Boris Wild, David Stone or Yann Frisch. Images of their hands in action are projected on the screen 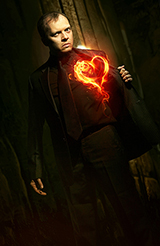 A different approach is the street magic approach, a form of filmed street magic, sometimes called guerilla magic. Born in 1996 with the television show David Blaine: “Street magic”, it inaugurates a new form of street magic, direct, in contact with passers-by, with the objective of taking people by surprise. In addition to close-up effects, there are also some great illusions, some hypnosis demonstrations or some physical endurance acts. Blaine and the rare other artists who follow him in this direction, such as Derren Brown, Criss Angel, Dynamo or Cero (Cyril Takayama 1973-), become stars on the television screen. However, by mixing effects that can be achieved in real conditions such as the coin in the can (Angel) or the telephone in the bottle (Dynamo) with great illusions requiring framing or even editing, there is a general suspicion about the "reality" of these magic experiences. Especially since the cameraman alternately lingers on the magician and the spectators, in search of their reactions. It is no longer the experience as such that matters, but the way it will be received by the few chosen spectators. Powerful, but ultimately virtual, with a very limited direct audience, street magic marks people's consciences but deserts them. The question then arises of the very essence and future of this art of reality, of immediacy and encounter.

Finally, the card game, one of the foundations of the close up, has a new use in a form of expert, graphic manipulation, the booming cardistry. 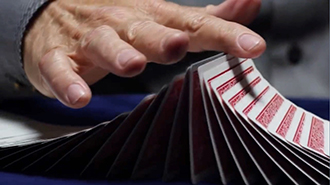 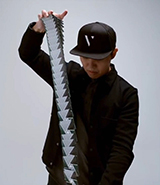