by Jeanne-Yvonne and Gérard Borg 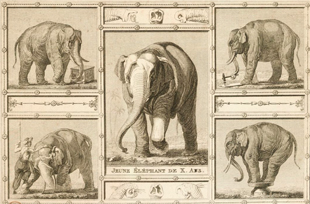 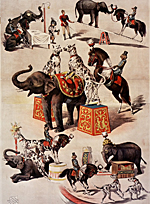 Man and the elephant

The elephant in the circus is a long and sometimes painful love story. The history of the circus has linked man and animal. This model, under various pressures, justified or not, is becoming increasingly fragmented in our world and the separation of animals from man is even leading to the demise of the greatest circuses: this is the case of Ringling Bros. and Barnum & Bailey in the United States in 2017, even though their herd reached nearly a hundred animals when John Ringling bought the American Corporation in 1929. In 1928, the New York Times reported that John Ringling spent $1,000 each month just to groom and care for his elephants. In May 2016, the circus directors put an end to the appearance of elephants in their shows and the last eleven pachyderms left to join the other thirty in a huge farm - the Center for Elephants Conservation - a 90-hectare sanctuary dedicated to them in Florida for a happy retirement. 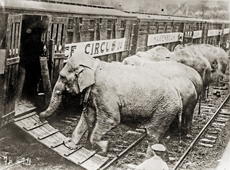 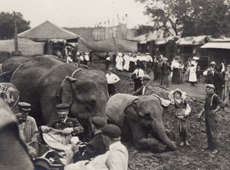 Present on earth long before man who respects his strength and intelligence, the elephant by these natural dispositions has accompanied him for millennia in his most diverse activities, from forestry work in India to wartime episodes. A mahout is intimately associated with each animal, often throughout its life: this symbiosis guarantees trust and therefore the execution of orders. The slightest hitch in this relationship is retained and recorded by the animal, which then risks turning its strength against a certain imposture. Raised to the divine symbol in Hinduism and Buddhism, the three-headed elephant then the white elephant, and finally Ganesh become revered and captivate the crowds. The ceremonies, parades and major celebrations of New Delhi and Jaipur are imported to the circus, the Adam Forepaugh circus in 1881 in the show Lalla Rookh and the departure from Dehli reworked by Barnum & Bailey in 1915, or the India pantomime at the Ringling Bros. and Barnum & Bailey circus in 1937 transformed into The Durbar and Delhi over the course of several seasons.
The great European circuses, Krone, Knie, Sarrasani, Hagenbeck, Althoff, Togni, Kludsky offer the public a series of similar scenes with a lot of glittery costumes and exotic coloured ornaments. At the circus, most of the work is done by the more docile Indian elephants, almost exclusively females, in order to avoid periods of "musth" for males and "tuskers" - male elephants with considerable tusks - which can sometimes lead to violent and unpredictable accidents. However, some troupes include African elephants. 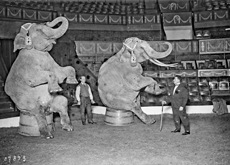 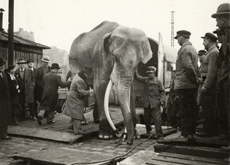 Dressage begins at about three years of age when the baby elephant is weaned. Daily care is very important and promotes successful dressage. An elephant weighing 3 to 5 tons requires more than 40 kg of hay and fresh grass, 8 to 10 kg of carrots, vegetables, apples, bananas and other fruits, granules and vitamins in any given day. The water absorbed must be of perfect quality. The daily treatments include pedicures, showers and brushing. The feet will be healthy and free from any parasitic attack or injury, permanently imposing clean floors. This contact with the groomer and the tamer contributes to the safety and well-being of the animal, and therefore to its confidence. The frequently criticised hook must not hurt: It is only a simple training tool in the hands of a caring person who uses it to guide him. The trainer's voice determines the animal's learning and socialisation. German, French, English, and Hindi for Asian elephants are used according to the commands. 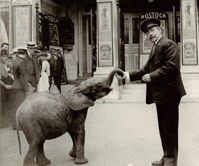 We remember the Swede Gösta Kruse at the Pinder Circus, passing by every night along the trailers before heading for the road to check on the well-being of the elephants with a gentle "Who is my girl?", waiting for Axelle, the herd's leader to gently trumpet back. A few moments earlier, in the ring, Axelle had lifted him up by taking his head in her mouth, a perilous and exceptional exercise already carried out by Laskovski, the "house trainer" of the 1950s. In his book Trunk Call, Gösta Kruse explains the progress of baby elephant training and first of all the ABCs of simple commands: "move forward, stop, come to me, lift a leg, lie down". Only then should the animal be introduced gradually to the external environment, and finally, with composure, calm and attention, be given more difficult exercises specific to each particular animal. Gösta uses Kamalachi's playful and intrepid character at Bertram Mills to show it off on the hood of a Land Rover during the city tour. 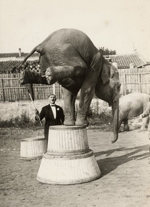 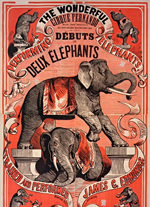 Star elephants in the ring

The large herds of elephants have been the emblem of circus shows in France since the arrival of the Barnum and Bailey circus in 1902 with its 19 "trunks": the arena in the Galerie des machines in Paris welcomes them for the greatest pleasure of the French public. Phinéas Taylor Barnum left behind the giant Jumbo, born in Abyssinia, purchased from London Zoo in 1882. Only the great Fritz was on the trip to Europe, but the difficulties and repeated dangers forced the management to part with it. Old Bet, the first circus elephant in the United States, is immortalised by a statue in Sommers.
Later, other star elephants will be the pride and joy of great establishments: the very imposing seven-ton Colonel Joë, presented by James Puydebois at an American circus called Circus Vargas and then in Germany at the Krone circus, but also the majestic King Tusk, a calm animal impressive for its enormous tusks. It was transported in a long and large semi-trailer specially designed for it at the Ringling Bros. and Barnum and Bailey circus in the 1990s. The great handlers are real "stars" like the German Gunther Gebel William who directed with his voice about twenty pachyderms in the ring of the biggest circus in the world. The expertise of the trainers made it possible to achieve the feat of the seesaw or batoude numbers: the thrust of an elephant on the seesaw catapults the artist, after a somersault, on the back of a second pachyderm. After Gunther Gebel in the 1960s, the Hungarians Richter, silver clown in 1974, Alexis Grüss and Mary in 1982, the same exercise performed by René Cassely's troupe won a golden clown at the Monte-Carlo Festival in 2012. The science of the trainer gives elephants an almost natural mobility and ease that helps the young family acrobats to give a flawless performance. In 1977, Franco Knie with a batoude and his brother Louis with his three tigers riding on elephants, were the stars of the 4th Monte-Carlo Festival. Their father Rolph had trained the gigantic Siam who shared the lead role with Yoyo in the eponymous film directed in 1965 by Pierre Etaix. The great Siam will then be the star of the Paris Zoological Park. Now in its natural state, it is currently on display in the Gallery of Evolution of the Museum at the Jardin des Plantes.
Will the 21st century see the disappearance of elephants in the circus, replaced for example by steel monsters with high-performance mechanics responding to digital orders, such as the elephant of the Royal de Luxe company in Nantes ? 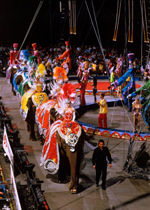